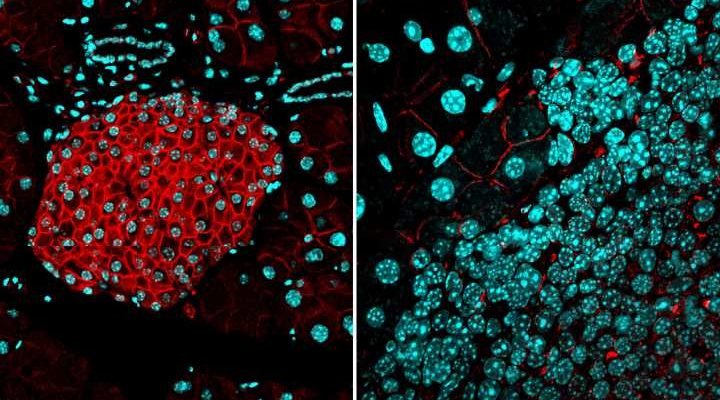 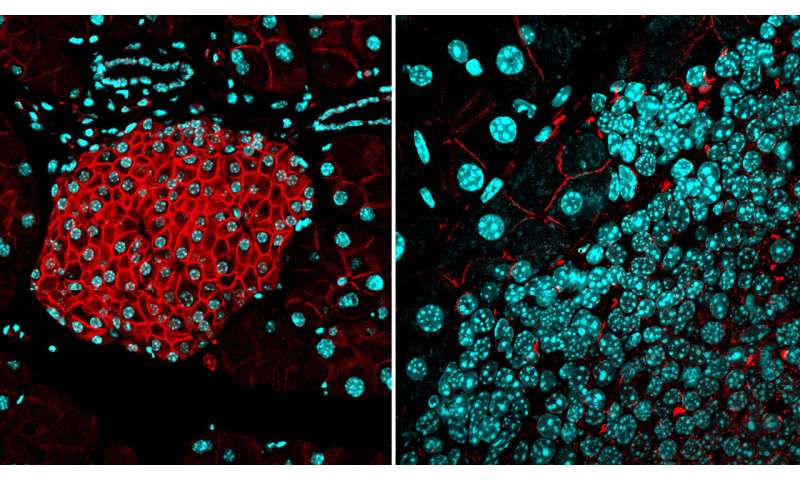 Activin B is one of the activin proteins. It binds and activates a receptor called ALK7—a member of the tumor growth factor beta (TGFß) receptors superfamily. When activated, ALK7 triggers a domino effect of molecular and biochemical reactions (a “signaling pathway”) that result in various changes across the cell.

Now, a team of researchers spearheaded by the lab of Douglas Hanahan at EPFL have found that activin B and ALK7 expressed by cancer cells can form a “barrier” that not only prevents them from forming new tumors, but also from metastasizing. The project was led by Iacovos P. Michael, a former postdoc in Hanahan’s lab.

The researchers studied the ALK7 signaling pathway in mice with either pancreatic neuroendocrine tumors or breast cancer. They found that when the receptor is activated by activin B, cancer cells died via a process called apoptosis. On the contrary, blocking ALK7 activation allowed cancer cells to evade death and successfully metastasize to various organs, such as the liver, lungs and brain. And the way by which cancer cells evaded the activin B/ALK7 “barrier” was by either downregulating activin B and/or downregulating ALK7.

“This study enforces the notion that apoptosis is an important barrier of tumorigenesis, and that its evasion by cancer cells is a key hallmark capability of cancer cells during malignancy and metastasis,” says Hanahan.

Furthermore, this study also revealed that the presence of ALK7 correlated with prolonged relapse-free survival (longer time for reappearance) of patients with various cancers, including breast cancer. Notably, comparatively higher levels of ALK7 expression were also associated with a longer period before metastasis became apparent in breast-cancer patients.

This study introduces a heretofore unappreciated role of a protective activin B/ALK7 “barrier”, which triggers apoptosis in ALK7-expressing cells that are therefore not ”authorized” to proliferate in a particular tissue microenvironment bathed in its ligand.