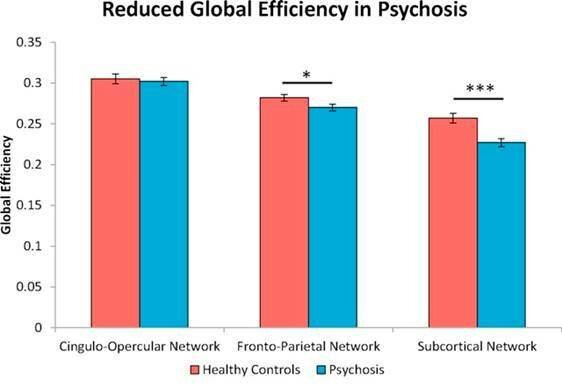 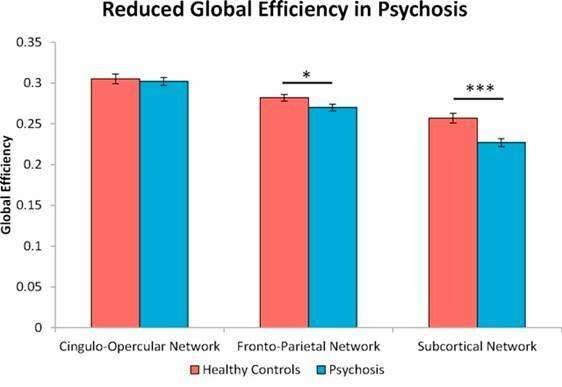 Patients with psychosis have accelerated aging of two brain networks important for general cognition—the frontoparietal network (FPN) and cingulo-opercular network (CON)—according to a new study in Biological Psychiatry. Efficiency of the FPN network was normal in early psychosis but reduced in chronic patients, indicating that the decline happens after illness onset. The findings support the idea that intervention to boost these brain networks after early signs of psychosis may help patients have better functional outcomes later in life.

“There is growing evidence that normal biological aging is accelerated in psychotic disorders. One aspect of healthy aging is declining cognitive function and less efficient communication within brain networks supporting cognitive abilities, including planning, problem solving, and memory,” said lead author Julia M. Sheffield, Ph.D., Vanderbilt University Medical Center. Communication within the FPN and CON networks shows the earliest signs of decline in healthy aging, so the new findings indicate that people with psychosis demonstrate normal patterns of brain aging, but at an accelerated rate.

In the study, Dr. Sheffield and colleagues used brain imaging to compare the connectivity between brain regions—a measure of how efficiently the regions communicate—in 240 patients with psychotic disorder (including schizophrenia and psychotic bipolar disorder) and 178 healthy controls. “The accelerated decline was specific to cognitive networks, providing evidence that accelerated aging is not due to a global reduction in efficient communication across the whole brain,” said Dr. Sheffield.

“The premature ‘aging’ or degeneration of cortical networks has been increasingly documented in association with schizophrenia. However, we have very little insight into the underlying mechanisms. Linking these imaging findings to mechanism is a critical step to understanding the progression of schizophrenia so that we may disrupt it,” said John Krystal, MD, Editor of Biological Psychiatry.

The finding that the decline in network efficiency appeared to begin after illness onset is particularly important for the potential to disrupt this progression. “With advances in cognitive remediation and the positive impact of exercise on connectivity of these networks, our findings provide hope that young adults with recent onset psychosis will benefit from interventions bolstering connectivity within these networks, potentially slowing down or normalizing the rate of decline in efficiency and, therefore, cognitive function,” said Dr. Sheffield.