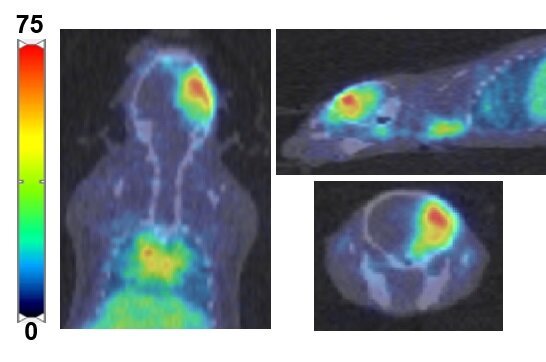 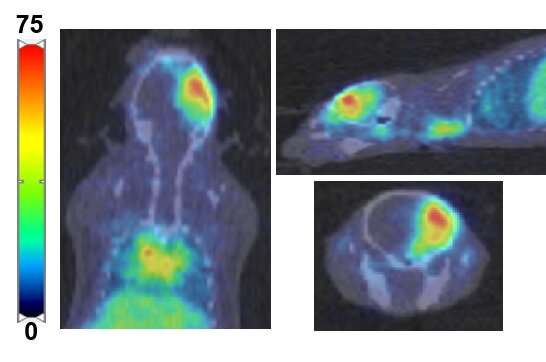 The study published May 1 in The Journal of Nuclear Medicine.

In their experiments, the research team tested whether a technique commonly used to treat strokes where a catheter is guided from an artery in the leg, through the body and into the brain, could be used to improve precision and efficacy of drug delivery.

The researchers chose to first test this intra-arterial technique with bevacizumab, an antibody protein used to treat a variety of human cancers. Similar antibodies are used also in the rapidly blooming field of immunotherapy.

Due to their large size, antibodies cannot easily cross the blood-brain barrier. To circumvent that problem, the researchers used a drug called mannitol, which is commonly used to lower pressure in the brain. Mannitol is a sugar found naturally in fruits and vegetables, and when delivered to arteries in the brain, it causes the cells making up the blood-brain barrier to contract, leaving spaces in between where large molecules can pass through.

The researchers studied this drug delivery method, comparing intra-arterial versus intravenous injection with and without opening of the blood-brain barrier. The group paired these methods with dynamic PET imaging that allowed them to watch the location of the drug during and after the infusion.

PET scans are widely used to diagnose and treat patients suffering from various diseases, such as cancer and Alzheimer’s disease. These scans are performed by injecting generally safe and relatively short-acting radioactive tracers into the body through a vein to track a variety of metabolic activities, including oxygen flow or the breakdown of sugar molecules.

Janowski’s team used one of these tracers, Zirconium 89, to label the bevacizumab antibody.

In the first experiment, the researchers anesthetized four healthy mice and guided a catheter to the brain. The researchers administered mannitol through the catheter to open the blood-brain barrier and approximately 8.5 megabecquerels, a standard measure for radioactive tracers, of bevacizumab labeled with the tracer. The researchers then imaged the brains of the mice on a PET scanner designed for small animals for 30 minutes after the drug was administered, and took more images one hour and one day after treatment.

Another four mice received a similar treatment, but without opening the blood-brain barrier. Again, the animals were imaged for 30 minutes after the drug was administered, and more images were taken one hour and one day after treatment.

The last group of four mice received the same amount of bevacizumab intravenously. This group of mice was imaged on the small animal PET scanner 15 minutes before the mannitol was administered, and 30 minutes, one hour and one day after treatment.

The results show that intra-arterial drug delivery with the blood-brain barrier opened was the most effective method, with 23.58 percent of the dose per cubic centimeter reaching the brain and remaining there until the last observation at 24 hours after treatment.

Intra-arterial drug delivery without opening the blood-brain barrier resulted in 9.66 percent of the dose per cubic centimeter reaching the targeted area of the brain in the first six minutes of treatment, decreasing to 9.16 percent at 24 hours, “which is still quite impressive, but significantly lower, emphasizing the importance of the blood-brain barrier opening,” says Wojtek Lesniak, Ph.D., director of the radiometabolite laboratory in the Russell H. Morgan Department of Radiology and Radiological Science at the Johns Hopkins University School of Medicine and first author on the study.

The mice receiving intravenous bevacizumab showed no brain uptake beyond background levels found across the body, regardless of the blood-brain barrier status.

“Although a little more technically demanding than the standard intravenous approach, the degree of enhancement of antibody uptake within the brain using the intra-arterial approach could revolutionize antibody-based immunotherapy for neurooncology,” says Martin Pomper, M.D., Ph.D., the Henry N. Wagner, Jr. Professor of Radiology and Radiological Science in the Johns Hopkins radiology department and a co-investigator on the study.

The Johns Hopkins team cautions that more research is needed to establish the safety of this procedure, but Janowski says that using the arterial route to deliver drugs directly into the brain could offer the benefit of limiting exposure of the whole body to toxic anti-cancer agents.

In the future, the researchers plan to move toward clinical trials of this technique in humans.