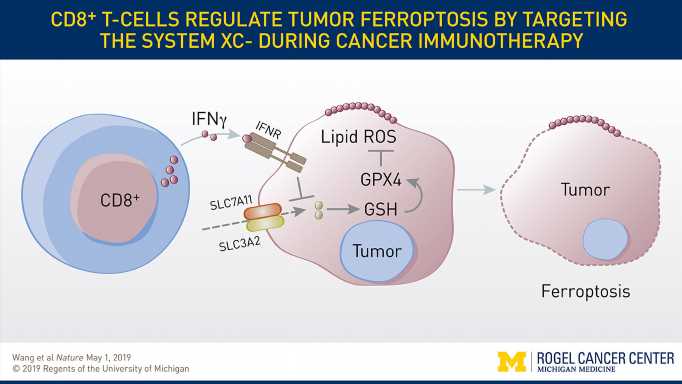 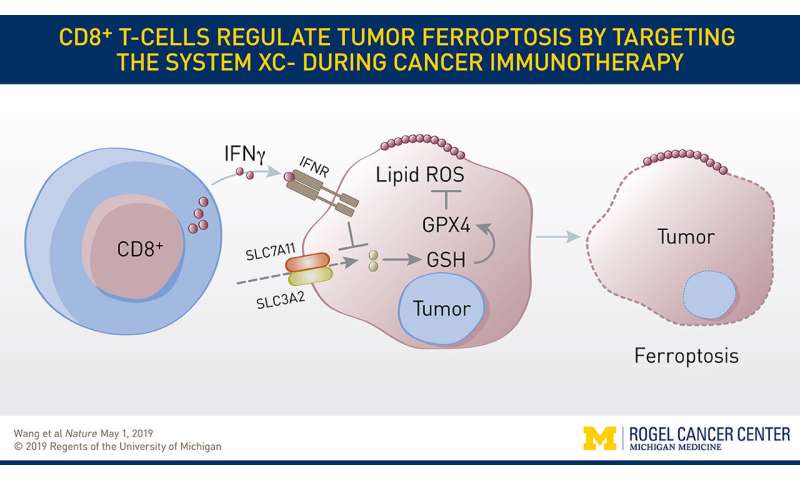 Researchers at the University of Michigan Rogel Cancer Center looked at a little-understood type of cell death called ferroptosis. They found ferroptosis occurs in tumor cells and plays a role in cancer immunity, suggesting the potential of targeting this pathway to improve immunotherapy treatments. The study is published in Nature.

“Ferroptosis had been defined before but it was not known to be linked to cancer cell death or immune cells. This will open a huge window for scientists to explore,” says senior study author Weiping Zou, M.D., Ph.D., the Charles B. de Nancrede Professor of Surgery, Immunology, Biology and Pathology at the University of Michigan.

The researchers, in collaboration with Cayman Chemical, found that when immunotherapy revs up the immune T-cells, it then enhances oxidized lipids in the tumor cells that leads to ferroptosis. Increased ferroptosis made immunotherapy treatment more effective at killing the cancer, based on studies in mice and human cancer cells.

Ferroptosis is a form of cell death, distinct from the better-known and well-studied apoptosis. It’s dependent on iron, but little more is understood about it. It’s known to be involved in brain and kidney injuries. This is the first time it’s been linked to immune-mediated cancer cell death.

“If ferroptosis is a critical pathway, we may be able to sensitize it to further stimulate immunotherapy or overcome resistance to immunotherapy,” Zou says. “We need to understand this better and work out different mechanisms.”

This is the initial step, and Zou cites many questions that need to be explored and understood before any treatment moves forward.