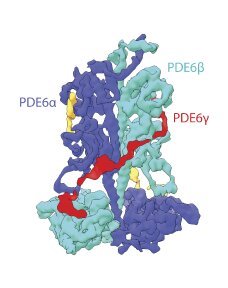 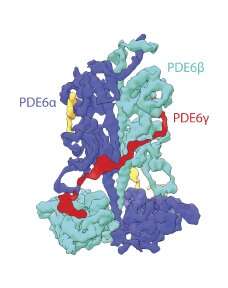 In a study published in Science Advances magazine, researchers from the University of California, Irvine have captured, for the first time, the full-length structure of the rod photoreceptor phosphodiesterase 6 (PDE6), an enzyme that plays an indispensable role in human vision.

PDEs are associated with various diseases and are targets of several widely used drugs and major targets for drug development. Unfortunately, many of these enzymes have similar structures, particularly their catalytic domains, where the chemical reaction takes place. Because of this, inhibitors that target one type of PDE can stop the reaction in multiple members of the PDE family, resulting in unwanted side effects.

PDE5 inhibitors, for example, such as sildenafil (Viagra) and vardenafil (Levitra), which are used to treat erectile dysfunction and pulmonary hypertension, can stop the reaction in PDE6 resulting in side effects affecting vision.

“PDE5 inhibitors are associated with several visual side effects, including blurred vision, changes in color vision, extreme sensitivity to light, and in extreme cases, damage to the optic nerve that relays optical signals to the brain,” said Sahil Gulati, Ph.D. “These side effects are caused by the binding of PDE5 inhibitors to PDE6 in the retina.”

Led by Gulati, researchers, including world renowned vision researcher Krzysztof Palczewski, Ph.D., director of the UCI Center for Translational Vision Research at the Gavin Herbert Eye Institute, Department of Ophthalmology at the UCI School of Medicine, and a team from the University of Basel in Switzerland, used single-particle cryo-electron microscopy to visualize the full-length PDE6 enzyme. They revealed fish-hook-like regions of the PDE6 structure that forms potential signal transduction routes from the regulatory domains of PDE6 to its catalytic domain.