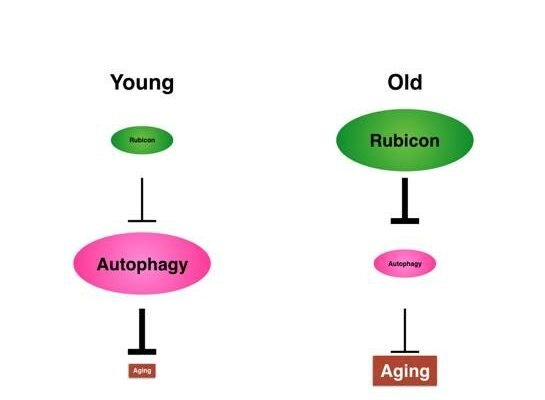 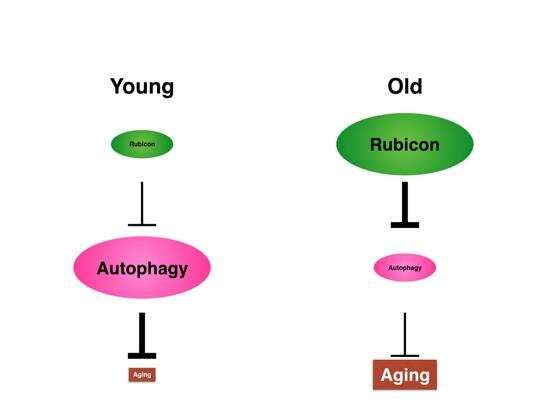 Autophagy is an important biological recycling mechanism that is used to maintain homeostasis (balance or equilibrium) within all types of animal tissue. Many studies have attempted to understand the relationship between the reduction of autophagy and progression of aging in animals; however, none have provided a clear explanation until now.

In 2009, a research team led by Tamotsu Yoshimori at Osaka University identified Rubicon as a protein factor that suppresses autophagy by controlling a specific step in this pathway. This time, the team found that Rubicon expression levels increased in an age-related manner in worm, fly, and mouse tissues, publishing their findings in Nature Communications.

Autophagy allows degradation of damaged cellular components and helps to avoid the onset of a variety of diseases related to cellular stress and dysfunction, including cancer, neurodegenerative diseases, and metabolic syndromes. Reduced autophagy has recently been linked to progression of aging in animals. While a variety of methods can increase autophagy in aged animals, thereby slowing the aging process, there has been no definite finding regarding the underlying cause of naturally reduced autophagy.

“Rubicon has been linked to inhibition of the autophagic process, and knockout of Rubicon in mice helped to mitigate autophagy-related liver diseases,” says Yoshimori. “Therefore, we suspected that Rubicon may directly affect aging through its interaction with autophagy.”

In the study, increased levels of Rubicon were found in tissues from multiple aged model organisms (worms, flies, and mice). When the researchers suppressed Rubicon expression, all model organisms demonstrated increased autophagy activity, which led to improvement of multiple age-related factors and slightly increased lifespan in worms and flies.