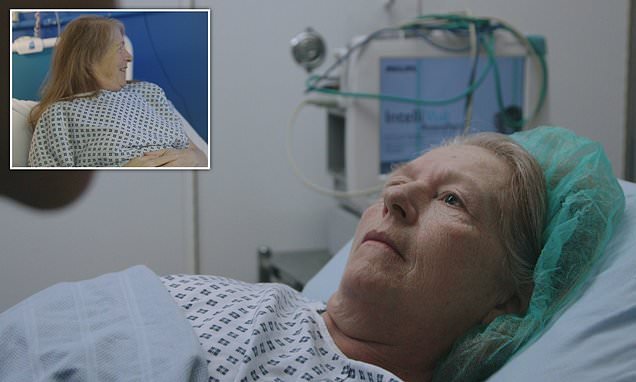 A woman who has less than 24 hours to prepare for a life-changing kidney transplant will feature in tomorrow’s episode of the BBC Two documentary, Hospital.

The series’s penultimate episode will tomorrow focus on the kidney transplant centre at the Royal Liverpool University Hospital.

Pamela, who is in her mid-fifties, only found out it was time for her transplant the day before it was going to happen.

A donor suddenly became available so she must be rushed into hospital so staff can prepare her for when the desperately needed organ arrives. 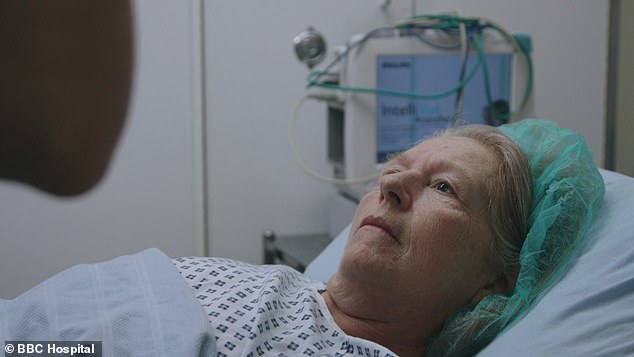 Pamela, who is in her mid-fifties, only found out it was time for her transplant the day before it was going to happen

Other patients in tomorrow’s episode include Collette, 33, who is preparing to donate a kidney to her older brother, and Lauren, 27, who is pregnant with twins in a different hospital where doctors are considering when to give her a C-section.

Tomorrow’s episode, to be shown at 9pm, will be the fifth and second-to-last episode in this series of Hospital.

The Royal Liverpool University Hospital is one of 24 kidney transplant centres in the UK.

Twice as many transplants are being done in the unit as when it opened 20 years ago, in part due to increasing obesity, type 2 diabetes and an ageing population.

Pamela had been on the waiting list for six months after a bladder problem damaged her kidneys and now a matching organ has been harvested from someone who died.

Medics are in a race against time to transport the kidney to the hospital and complete the procedure.

There is a 12-hour window after the donor’s death which is optimum for kidney transplant surgery.

But as Pamela gets into hospital and prepares to go under the knife, news breaks of a potential cardiac arrest patient who might need to go into the hospital’s only emergency operating room before her.

With kidneys only working at five per cent of their original function, Pamela could face a nail-biting wait to see if she will make it into the theatre in time.

Another patient in the kidney unit is Collette, a 33-year-old mother of two, who is preparing to donate a kidney to her brother Michael, 38. 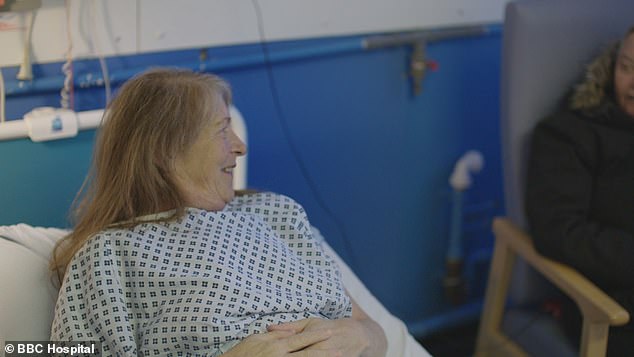 Michael has end stage kidney failure and has to spend four hours on dialysis four times a week.

There is no cure for his illness and a transplant is his only chance at survival.

Across the city in the Liverpool Women’s Hospital, Lauren, 27, faces a dilemma in an emotional pregnancy.

She is 33 weeks along and has discovered one of her sons, Albi, will die soon after birth because of a condition which has stopped his head developing properly.

His brother, Bobby, is perfectly healthy. Lauren and her fiancé, Gary, want to donate parts of Albi’s body to medicine.

Lauren begins to feel pain and her doctor wants to bring forward her C-section date, but it could mean Albi will be too young to donate his liver cells and heart valve.

The doctors have to balance this with the welfare of Lauren and the healthy boy, Bobby.

Hospital is on BBC Two tomorrow, Thursday February 7, at 9pm.

WHAT IS CHRONIC KIDNEY DISEASE AND HOW CAN YOU SPOT IT?

Our kidneys filter out waste products and excess fluids from the blood before they are excreted through urine. They also help maintain blood pressure.

As CKD advances, the kidneys do not function properly and dangerous levels of waste build up in your body.

The risk of CKD increases as you age. It is also more common among Asians and blacks.

CKD does not usually cause any symptoms until it has reached an advanced stage. It can be detected early on via blood and urine tests.

Those with the condition have a greater risk of having a stroke or heart attack. It can also cause kidney failure, when sufferers will need to have dialysis or a possible transplant.

However, lifestyle changes and medication can stop the disease from getting worse if it is diagnosed at an early stage.

To reduce your risk: