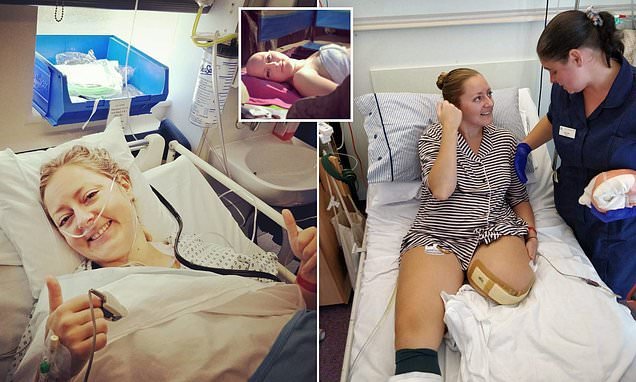 Woman, 29, has her leg amputated to stop years of pain after being diagnosed with bone cancer at 17 when she broke her shin stepping off a bus

An amputee whose leg was destroyed by cancer has said farewell to her troublesome limb and now wants to become a Paralympic canoe racer.

Josephine Bridges, now 29, discovered something was seriously wrong when she broke her leg by simply stepping off a bus when she was just 17.

When her leg was X-rayed doctors diagnosed her with terminal stage three osteosarcoma – bone cancer – and replaced the diseased bones with metal.

But despite overcoming the cancer, Mrs Bridges has suffered years of pain and infections, so last year decided to have her left leg amputated and move on with her life.

She now wants to become a paracanoe competitor and to inspire other people who have lost their limbs, saying: ‘There are so many opportunities out there waiting for you as an amputee’. 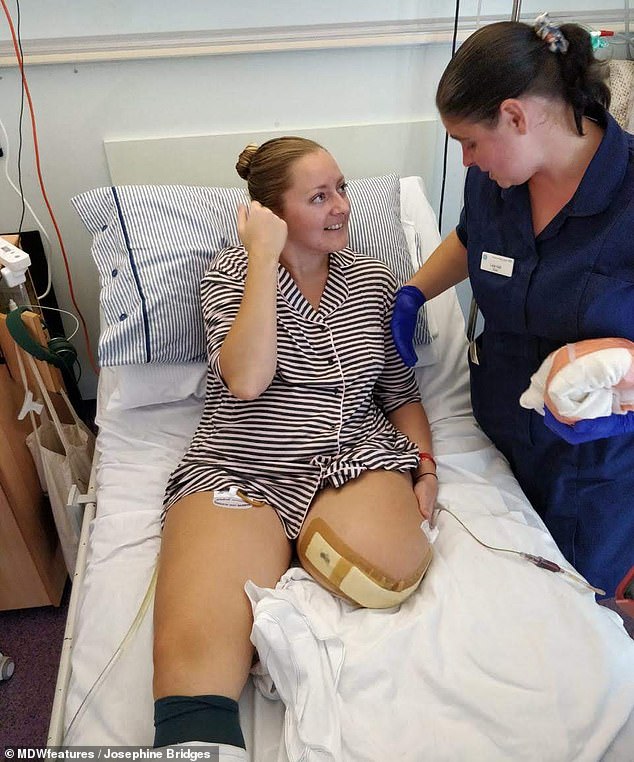 Josephine Bridges, 29, had her leg amputated last year after years of pain and disability caused by her shin and knee being replaced with metal after cancer destroyed them when she was a teenager

Mrs Bridges’s family were dramatically told to ‘say their goodbyes’ to her when she was diagnosed with terminal cancer at 17.

Weakened by the cancer, her leg had crumbled under her weight as she stepped off a bus.

But she urged doctors to give her a risky surgery to take out the diseased bone in her shin and knee and replace it with metal.

‘I demanded treatment and we fought for leg salvage through tears and arguments,’ Mrs Bridges, from Birmingham, said.

‘What followed was a solid nine months of chemotherapy – three rounds in four weeks with one weekend off.

‘In the middle of my treatment, around late May, the time came for surgery. We had been to three surgeons before we finally found one who agreed to give limb salvage a go.

‘It was an experiment and the surgeon repeatedly told us it was unlikely to be pulled off.

‘I went into surgery not knowing whether I would come out with my leg, but thankfully I did, and I walked out of the ward in November.’ 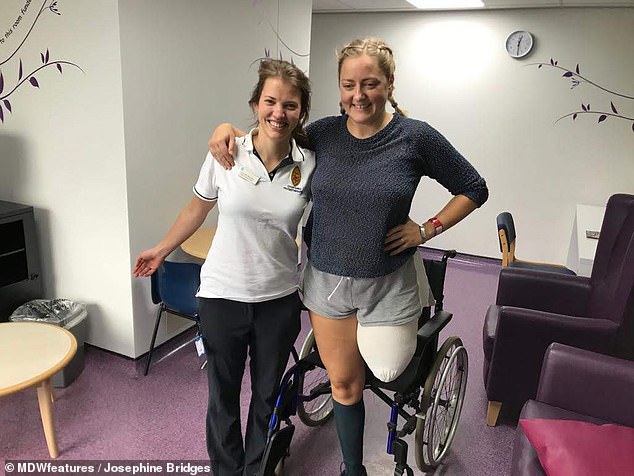 Mrs Bridges, pictured with a physiotherapist after her op in November last year, decided to have the amputation after her metal implants kept getting infected and slipping out of place 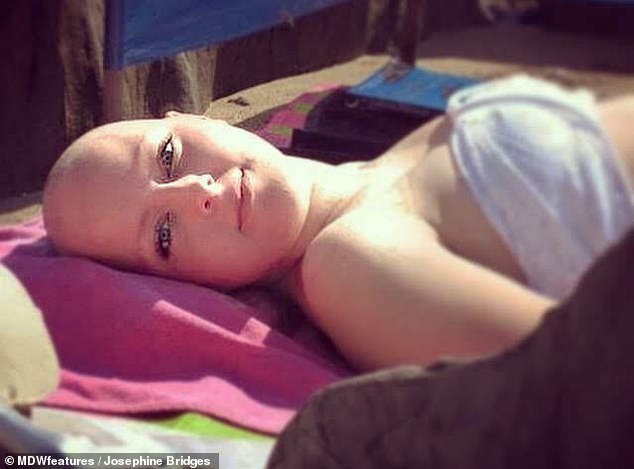 Mrs Bridges, pictured as a teenager, had chemotherapy and her leg bones removed when she was diagnosed with advanced bone cancer at the age of 17 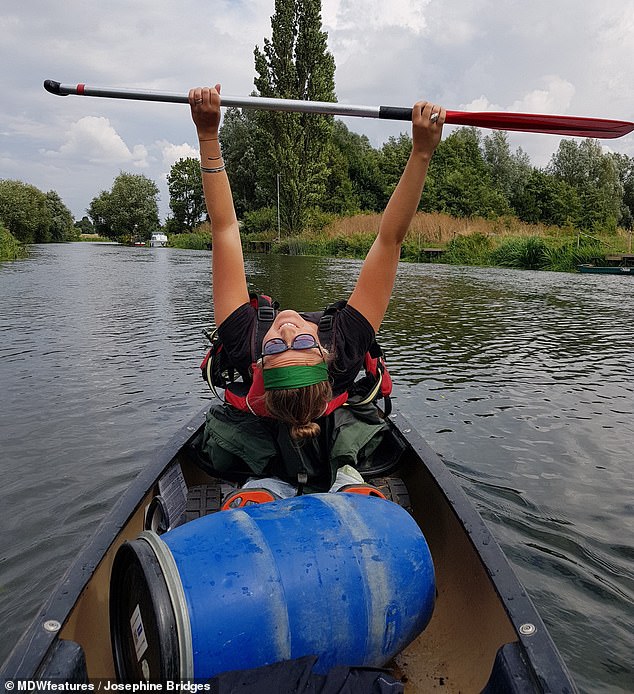 Pictured canoeing before having her leg removed, Mrs Bridges now said she wants to become a Paralympic athlete in the sport, saying: ‘There are so many opportunities out there waiting for you as an amputee’

In the years that followed Mrs Bridges’ surgery in 2008, she learned to live with the new leg and went into remission from her cancer, despite doctors’ death sentence.

Osteosarcoma is the most common type of bone cancer, usually diagnosed in teenagers and young adults.

It occurs when the cells that grow new bone form a cancerous tumor.

The cause of the cancer is unknown but it is thought to be related to rapid bone growth, such as adolescence.

If the cancer has not spread, the long-term survival rate is between 70 and 75 percent.

If osteosarcoma has already spread, such as to the lungs or other bones at diagnosis, the long-term survival rate is about 30 percent.

There are a few treatment options for osteosarcoma.

Often administered before surgery, chemotherapy uses drugs that help shrink and kill cancerous cells. The length of treatment varies and may depend on whether the cancer has spread to other parts of the body.

In most cases, surgeons can save the cancerous limb. The tumor and surrounding bone are removed and the missing bone is replaced with an artificial one.

A rotationplasty is a procedure in which the bottom of the femur, the knee, and the upper tibia are surgically removed. The lower leg is then rotated 180 degrees and attached to the femur.

But the limb soon became troublesome. Soon it got infected and surgeons had to replace the metal implants in a bid to stop the illness getting more serious.

‘The problem with having any metal in your body,’ she said, ‘is that infection latches onto it, and so the whole bone and knee had to be replaced in order to rid me of the infection.

‘When I started university in 2009 I had all of the usual experiences of halls, freshers and badly cooked food.

‘In my mind my leg was great. I couldn’t do stairs well, run or sometimes even walk well, but my leg allowed me to dance all night, so at 19 that was the compromise I made.’

One day, however, she noticed her leg looked odd and ‘felt loose’ as she walked.

She took a photo and emailed it to her surgeon and, within a week, was back in hospital having her kneecap reattached because it had moved up her leg.

Life continued as normal again until, after graduating, getting a job, buying a house and getting married, her body began to reject the cement in the artificial joint.

Mrs Bridges said: ‘My final revision was 2017 and at this point surgeons mentioned it could be my last.

‘We think because the wound never healed that was the cause of the leg repeatedly loosening in following years.

‘The initial infection happened at the area where my ankle met the metal tibia, and this was always the area that became loose.

‘It was nearly always surrounded by fluid – a sign of previous infection.’

In June 2018, after months of constant pain, Mrs Bridges researched the possibility of having the leg amputated and decided to go ahead with the procedure.

Surgeons finally cut off her leg just above the knee in October last year and she got her first prosthetic in November.

A lover of travelling and sports, Mrs Bridges has since had a go at numerous activities and decided she wants to become a paracanoe competitor.

She said: ‘Although amputation was no guarantee that I’d be without pain, it gave greater chance of me being able to do what I loved without compromising.

‘We returned to the surgeon in September with a decision in mind, and it was during this drive to the hospital that I announced to my husband, “if I’m going to become an amputee, I want to become a Paralympian,” and I settled on paracanoeing.

‘Towards the end, my old leg was useless and difficult to move. I already feel freer and more able.

‘I want to live without the fear I had before that my leg would get damaged or the pain would return.

‘There are so many opportunities out there waiting for you as an amputee.

‘If you have to choose between living life with a limb that doesn’t work or an amputation, make the decision for you – you have to be sure of your choice.’