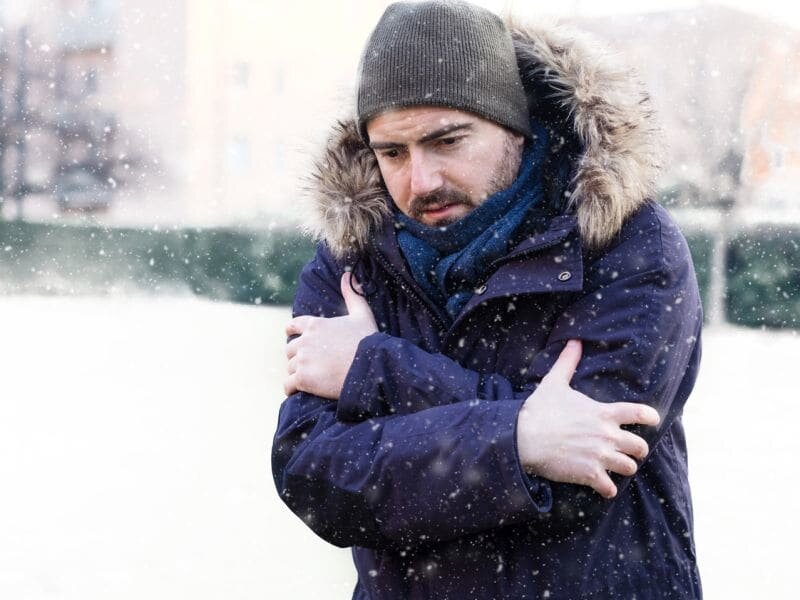 (HealthDay)—Minus 29 Fahrenheit in Fargo, minus 28 in Minneapolis, minus 13 in Des Moines.

With potential record-setting low temperatures ahead for much of the nation, one expert warns that frostbite can quickly strike exposed skin.

“With wind chills approaching the single digits and below zero, it is possible to develop ‘frostnip’ with progression to frostbite in exposed areas in as little as 20 to 30 minutes,” said emergency medicine physician Dr. Robert Glatter.

Frostnip is the first stage of frostbite. At this point, skin turns red and irritated, but there’s no permanent damage, said Glatter, who practices at Lenox Hill Hospital in New York City.

“You can treat mild cases of frostnip with simple re-warming of the skin with warm water,” he said. However, “severe frostbite requires immediate medical attention, because it can cause permanent damage to skin, underlying tissue, as well as bones and muscle, and may lead to complications including infection, and nerve damage,” Glatter warned.

With full-blown frostbite, the skin and tissue just beneath it freezes. According to the Mayo Clinic, frostbite first leaves the skin feeling warm, but as it progresses numbness sets in, and joints and muscles stop working. In severe cases, frostbitten tissue turns hard and black, and dies.

Frostnip and frostbite tend to affect smaller and more exposed areas of the body, such as the nose, fingers, toes, ears, cheeks and chin, Glatter said.

“Small blood vessels that supply these areas are at higher risk for frostbite,” he explained.

Some people are at higher odds for frostbite than others, meaning that it may take even less exposure time for the condition to set in, he noted. People at higher risk include smokers, people with diabetes or peripheral vascular disease, and those who take heart medicines called beta blockers.

“Diabetics with neuropathy may not be able to feel their feet, and so they remain at high risk for frostbite of the feet as well as hands,” Glatter said.

What if you do get frostbite?

“Don’t place a frostbitten extremity in hot water before you get to the emergency department, unless there will be a significant delay to initial care and treatment,” Glatter added.

“In general,” he said, “it’s advisable to allow emergency department personnel to begin the rewarming process, since it can lead to greater damage to the extremity as well as a greater drop in core body temperature if not done properly.”

Of course, the best way to stay safe from sub-zero weather is to stay inside where it’s warm. But if you must go out, dress appropriately.

It is most important to dress in layers, Glatter said, “and to keep your head and face well-covered since this is an important area at risk for heat loss as well as frostbite. At the same time, it’s also important to pay extra attention to footwear and type of socks to reduce risk for frostbite.”

In addition, “wearing warm wool gloves or mittens is essential, and wearing two pairs of thick wool socks, along with well-insulated boots, reduces the risk of developing frostbite,” he said.

Even your eyes are at risk from icy blasts.