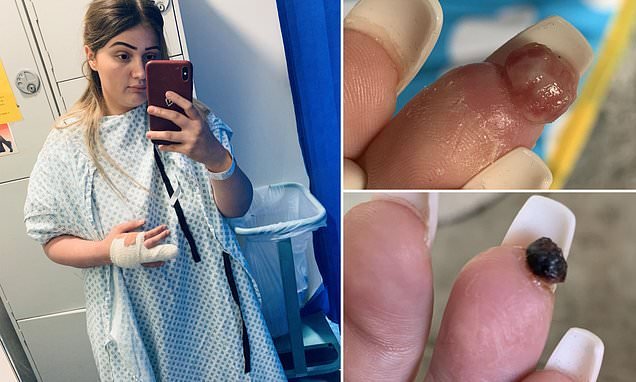 A mother almost needed her finger amputated after a cut from a nail technician’s electric file turned into an infected, black growth.

Brittany Guyatt, 20, from Swindon, Wiltshire, claims the equipment used was dirty when she had acrylic nails fitted on March 15.

Over the next few days, a bruise developed into what, at first, looked like a blood blister but grew ‘bigger and bigger’.

A small nodule the size of a centimetre became infected, filled with smelly pus and left the restaurant manager in unbearable pain.

Ms Guyatt was told she needed surgery on May 29 to scrape off what was diagnosed as a granuloma, or faced losing part of her finger.

She has vowed never to have acrylic nails done again and is warning others to make sure the equipment used on them is sterilised properly. 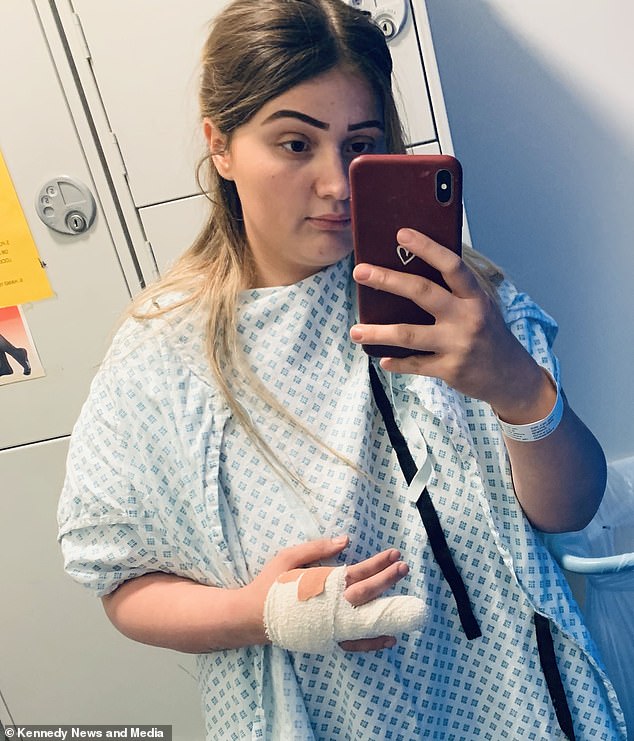 Brittany Guyatt claims she almost needed her finger amputated after a small cut from a nail technician’s electric file. Pictured after having the growth surgically removed 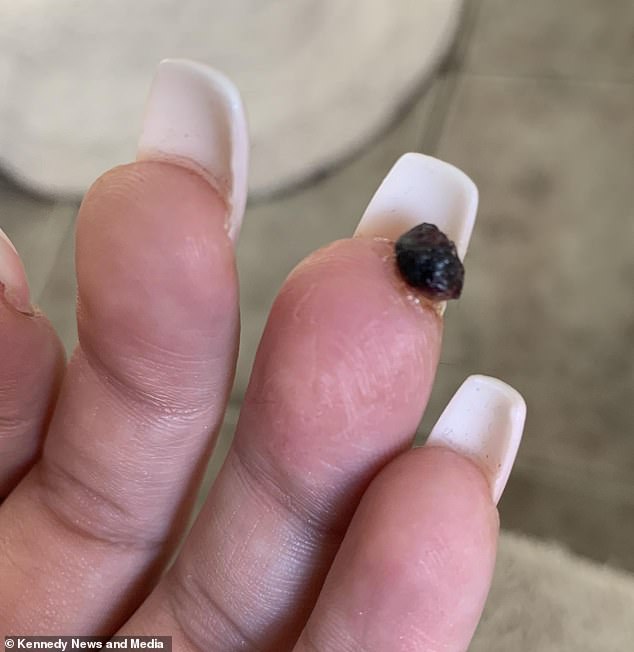 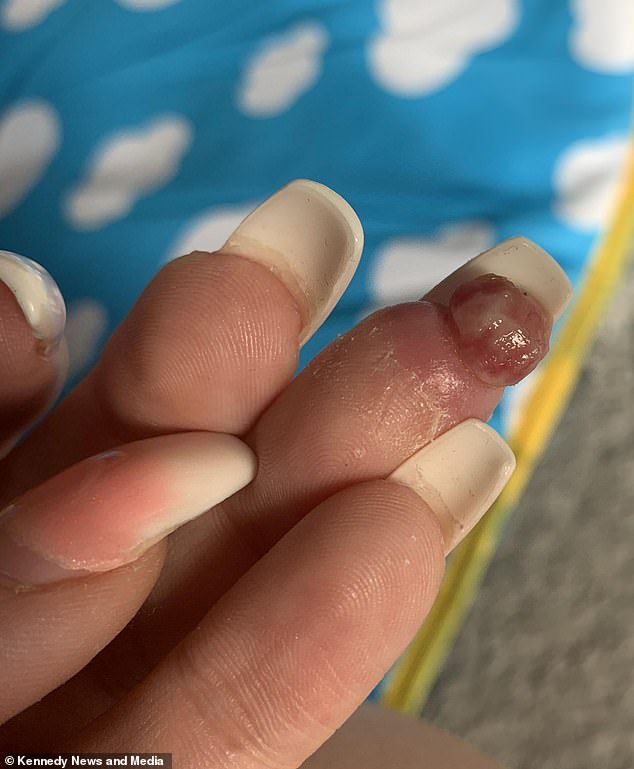 A small nodule the size of a centimetre became infected, filled with smelly pus and left Ms Guyatt in unbearable pain (pictured, around one month after the injury)

After sharing her ordeal on social media, her warning racked up more than 21,000 likes, comments and shares from worried Facebook users.

Ms Guyatt said: ‘You see these things and never think it’ll happen to you. I’ll never have my nails done again – it’s not worth it. I’d rather buy stick-on ones.

‘I just want other girls to make sure they see the technicians sterilise the equipment. I’d never seen them wipe them before. Make sure you go somewhere you trust.’

Ms Guyatt and her sister had decided to get their nails done at a local nail salon they had been to before. It has not been named.

Ms Guyatt, who gave birth to daughter, Harper, a month after the injury, said: ‘When the man was shaping the acrylics, I felt him pinch me with the nail filer.

‘He was quite rough and when he caught my finger, it started tingling and burning. Nothing came up until a few hours later though.

‘I didn’t say anything at the time because they can be a bit rough anyway and they’ve caught my skin a few times in the past.

‘At first it looked like a little bruise, but eventually it started getting bigger and going red.

‘It was a pinch at first, then it started to become a lump a bit like a blood blister. I didn’t think much of it and presumed it was a little wart that might fall off.’

As growth got bigger, it went white and Ms Guyatt’s skin started to peel off. 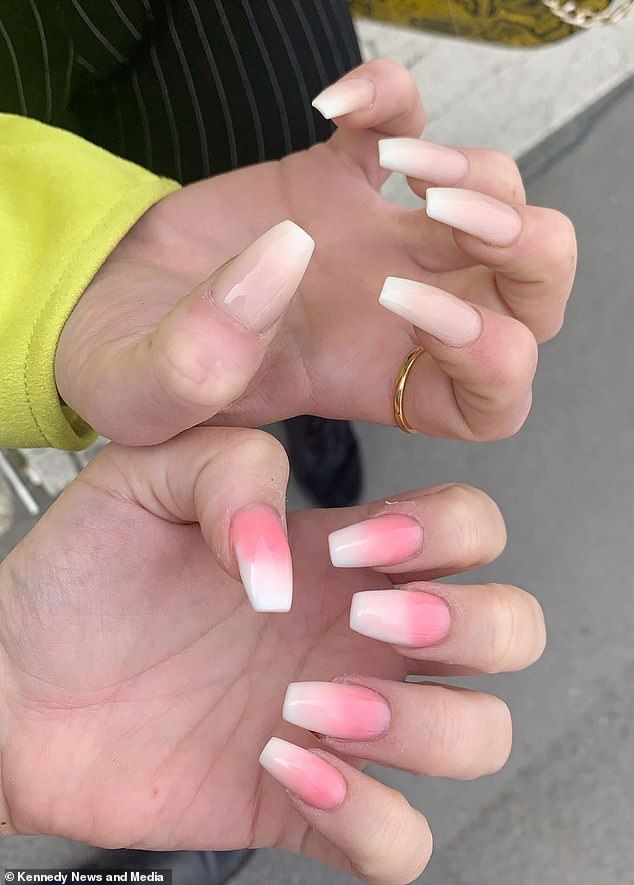 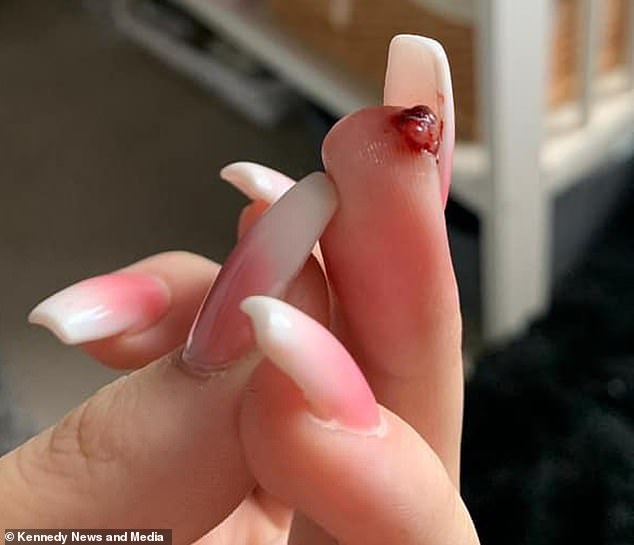 At first, the injury looked like a blood blister but Ms Guyatt said she didn’t think much of it 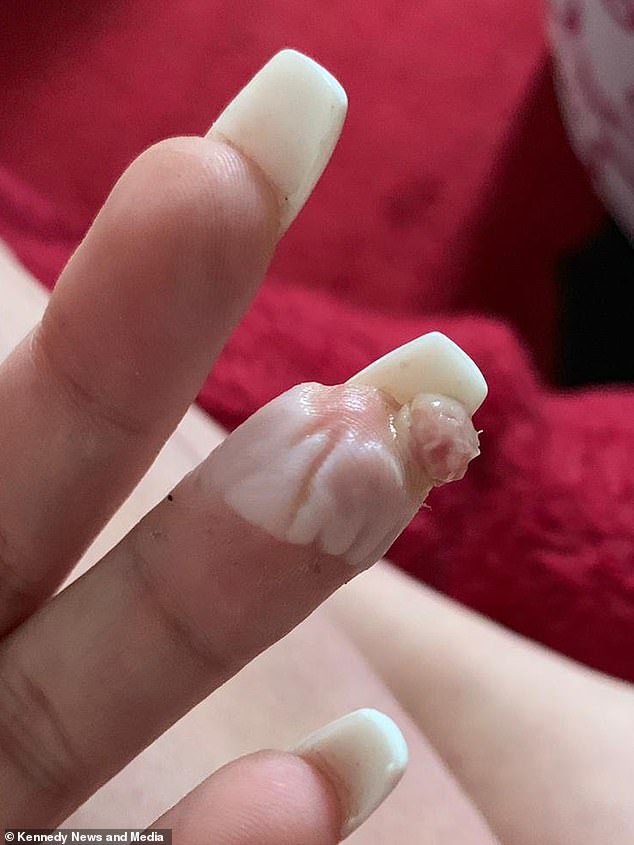 A couple of weeks after the injury, Ms Guyatt said the growth went white and her skin peeled 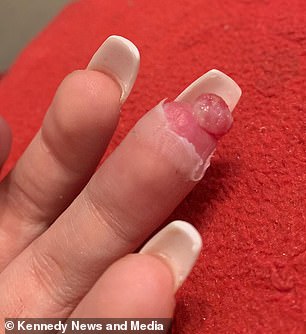 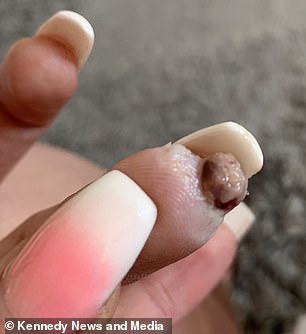 WHAT IS A GRANULOMA?

A granuloma is inflammed tissue typically in response to an infection.

They can be caused by a variety of irritants to human tissue.

Granulomas are often found incidentally on an X-ray as they can frequently occur in places such as the lungs.

Because it can cover so many types of ‘small nodules’ the term granuloma isn’t specific.

A foreign-body granuloma occurs when a piece of wood splinter, metal, glass or similar penetrates the body’s soft tissue followed by inflammation and formation of a granuloma.

Granulomas are also associated with diseases including tuberculosis, leprosy and Crohn’s.

She said: ‘Then it went black and dried up. It could have been anything – even cancer.’

Ms Guyatt soaked it in salt water and covered it in plasters to stop it catching on things, and after Harper arrived, she worried about passing on an infection.

She said: ‘When I went into labour with Harper it was fine because I’d covered it with a plaster, but when I got home it started getting bigger and bigger.

‘I was concerned about it getting infected and harming the baby.

‘When I showed the doctor, she’d never seen anything like it before.’

She visited the walk-in centre and was told she had a granuloma, a growth of tissue in response to inflammation.

Ms Guyatt said: ‘I went to the walk-in centre as it had started to smell and fill with pus.

‘They gave me some steroid cream for it, which meant I had to stop breastfeeding my baby, and it didn’t get any better. 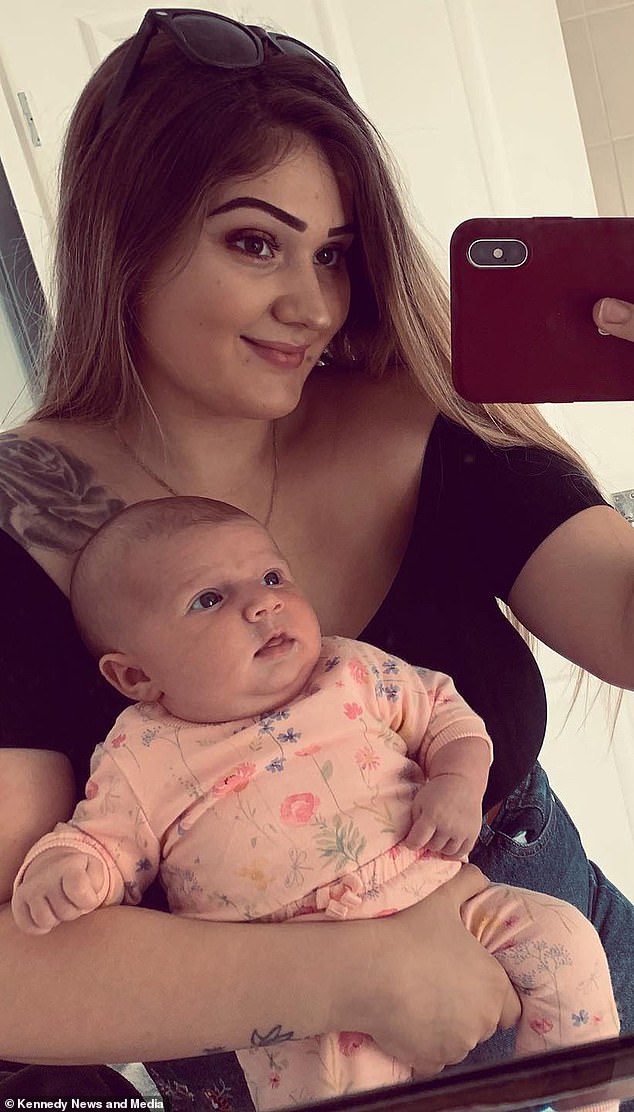 Ms Guyatt was prescribed steroid cream after the birth of her daughter, causing her to stop breastfeeding Harper (pictured) which was ‘disheartening’ 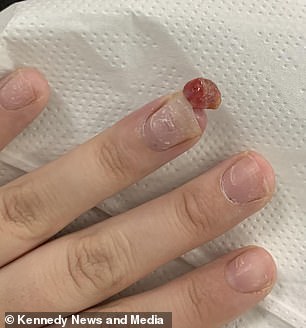 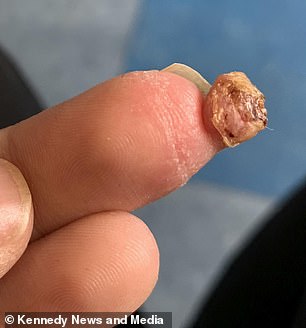 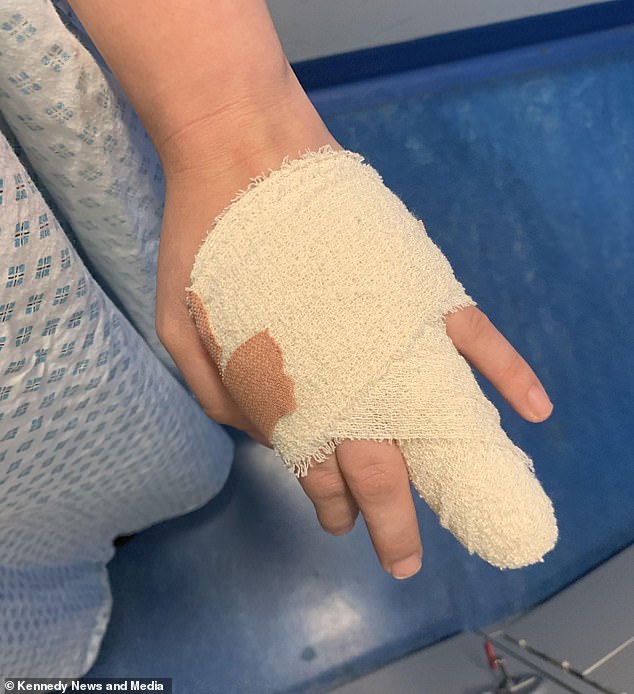 Ms Guyatt was told the granuloma would grow more because it had blood vessels inside. She had it scraped off (pictured, her hand bandaged) and it was sent for more testing 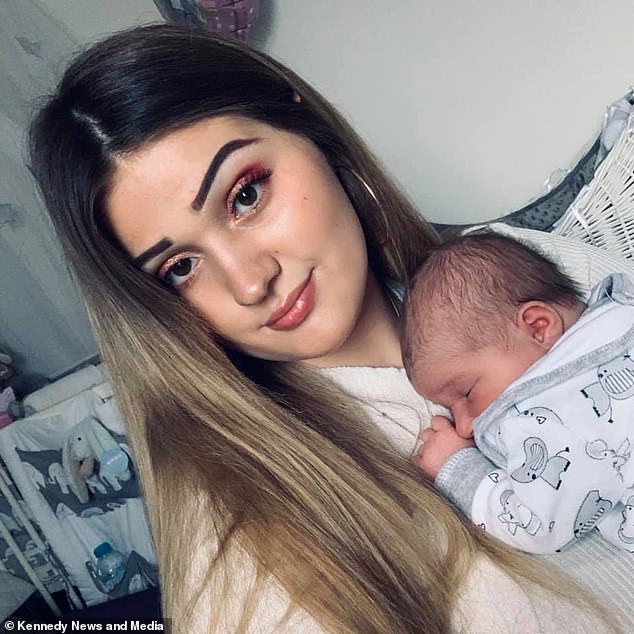 After having the surgery on May 29, she has to keep her hand out of water because it has stitches. Pictured with Harper at her home

‘I’m really disheartened by that because I was really enjoying breastfeeding and felt we had a great connection.’

On the second trip to the walk-in centre at Great Western Hospital, Swindon, Ms Guyatt was given blood tests and an X-ray to make sure the granuloma hadn’t fused to her bone.

They phoned her to say she would need to have an operation where it was cut out as doctors feared they would have to remove part of her finger.

Ms Guyatt said: ‘I was told it would only continue to grow because there are blood vessels in it, so the only way to fix it was to scrape and burn it off.

‘I had blood tests taken and X-rays to check it hadn’t attached to the bone, then on Wednesday I went in for the procedure.

‘They were worried about how low it would go down into my finger. They had a look, took a biopsy and cut it out to remove it. It was very painful but now it’s off.’

Doctors sent the growth off for further tests, and Ms Guyatt said: ‘It was much bigger than I thought when they showed it me in the solution.

‘The nurse needs to have a look next week at my stitches and I have to keep it out of water when I’m in the shower.

‘I’ve had to get help changing Harper’s nappy too because of the bandages. I’m now in a lot of pain and my finger is throbbing.’