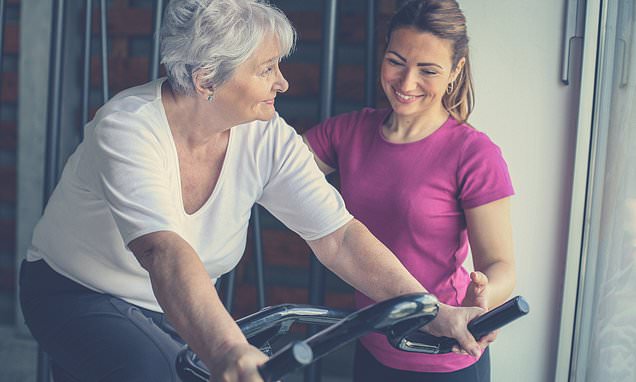 Just ONE 30-minute workout may improve memory by changing the way the brain works, study suggests

A single workout can change the way your brain works and improve memory, recent research suggests.

It’s no secret that those that routinely work out reap memory benefits, too.

But the new study from the University of Maryland shows that even a single, 30-minute workout can boost activity in key brain regions for memory and improve seniors’ recall for information. 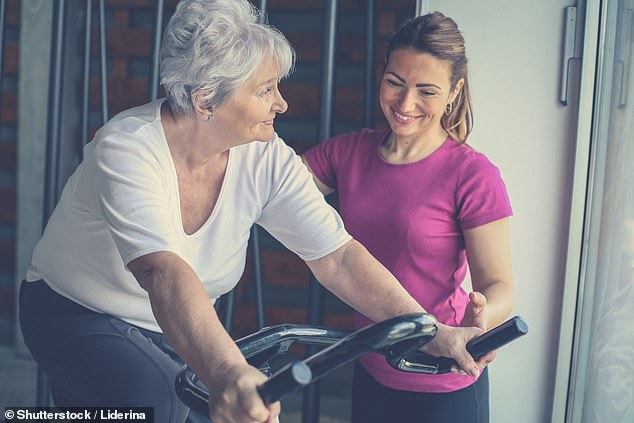 Just a single 30-minute session on a stationary bike can change brain activity and may improve memory function in older adults, a new study suggests

Almost 13 percent of people over 60 struggle to remember information and become confused, according to the Centers for Disease Control and Prevention.

Growing rates of Alzheimer’s dementia are a top health concern – but even without the deadly memory-loss disease, brain changes that come with age leave us all a little less sharp and self-sufficient.

Between the ages of 60 and 70, the frontal lobe and the hippocampus start to shrink, making it hard to form new memories.

Long before the shrinkage starts, however, it starts to get harder to recall people’s names or telephone numbers.

And about one third of older adults struggle to remember facts and events, which belong to the so-called ‘declarative memory’ (which divides further into the episodic and semantic memory, responsible, respectively, for experiences and facts or concepts).

Exercise is beneficial for them all.

Physical activity acts positively on the brain both indirectly and directly.

Whole-body benefits, like reducing inflammation and keeping insulin resistance at bay, have protective effects for brain cells and even encourage the development of new ones, according to Harvard’s health blog.

And, in the more direct sense, Harvard neurologist Dr Scott McGinnis explains that routine exercise has been shown to encourage certain regions of the brain – including those involved in memory – to gain volume.

In their prior research, University of Maryland scientists had determined that certain parts of the brain are actually less active during efforts to recall facts and concepts when the brain is working at optimal efficiency.

They saw this quieting and efficiency effect in older participants after they’d done a 12 week treadmill-walking course for the previous study.

Now, new evidence from the same scientists suggests that even one workout boosts memory – but in a different way.

Researchers at the University of Maryland put the semantic memories – meaning recall for facts and concepts – of 26 older study participants to the test.

In one of two sessions, they had the 55- to 58-year-olds sit still for 30 minutes, and then play a memory game which showed them the names of ‘Famous’ and ‘Not Famous’ names. They had to press a button to indicate whether or not they recognized each name.

In the other session, the participants played the same game, but did so after spending 30 minutes pedalling on a stationary bike.

During both iterations of the memory test, the participants brains were being scanned by a functional MRI machine.

After their workout session, the semantic memory parts of the participants brains were more active – not less, as the scientists had expected.

The research team hypothesized that a single exercise session has a sort of priming effect on the brain.

Just like a single personal training session might teach us new exercises and be the first step in the path toward muscle memory, a single workout might prime the brain for better semantic memory.

That suggests that even a single workout jump-starts memory function – but for the benefits to stick, you have to keep up the exercise.