Man, 21, SNAPPED four of his front teeth biting into an apple after ‘guzzling six Monster Energy drinks a day’ and now needs 24 FILLINGS

A man snapped four of his teeth and will need 24 fillings after spending months drinking as many as six cans of Monster Energy drink every day.

Vinnie Pyner, 21, got hooked on the drink, which is full of caffeine and sugar, to help him stay awake for his college studies.

Soon he was drinking up to 45 cans a week and his mother, Tara, 46, became concerned about his addiction.

His front four teeth eventually snapped when he bit into an apple after seven months of guzzling the drink at every meal.

Dentists discovered every tooth in his mouth had rotted, and now he will need 24 fillings and dentures – which will cost him £2,000.

Unemployed Mr Pyner, from Margate, is so embarrassed he quit his computing and coding college studies and fears he will never find a job. 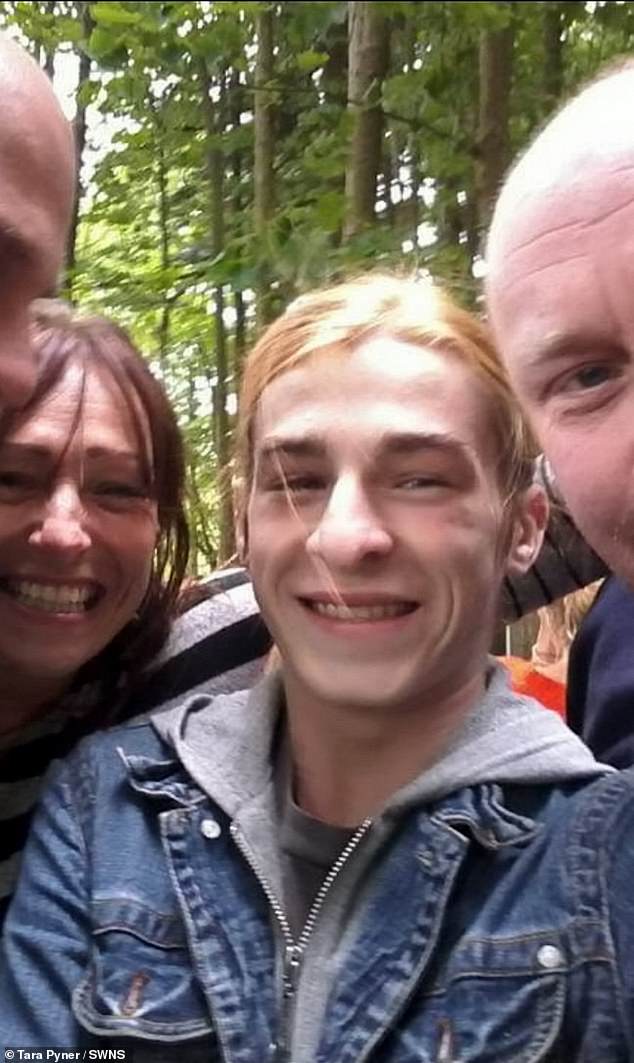 Vinny Pyner, 21, from Margate, started drinking Monster Energy drink to keep him more alert during his college studies. Pictured before

After drinking up to six cans a day for seven months, Mr Pyner began to have tooth pain. He hid his teeth from his mother, until the front four teeth snapped when he bit into an apple 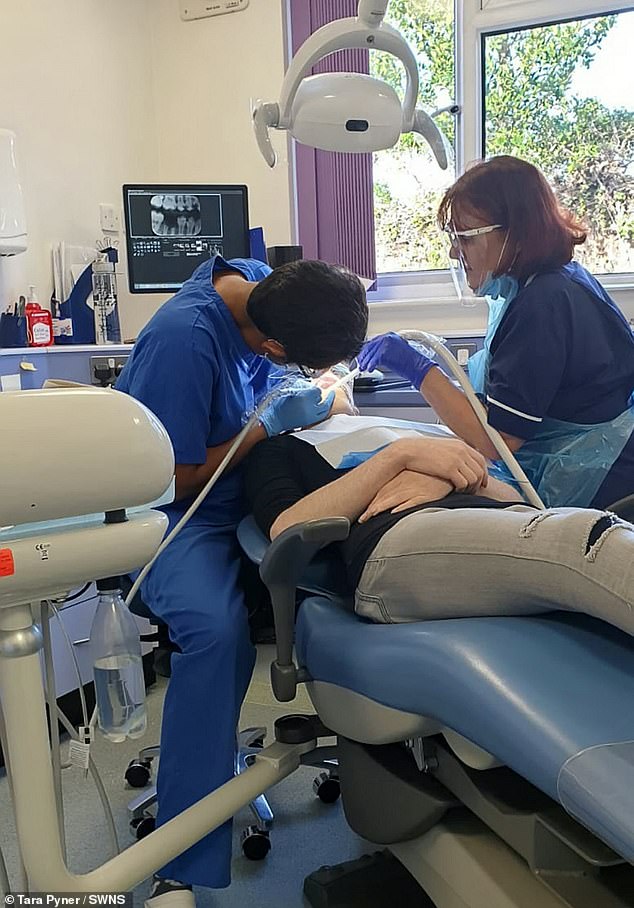 Dentists discovered every tooth in Mr Pyner’s mouth had rotted, and now he will need 24 fillings and dentures to get his smile back

Mr Pyner said: ‘I am not sure what the future holds but I hope that I can get back on my feet. Monster Energy has completely ruined my life.

‘It started as a way to relieve the stress and pressure from my college course because you have to be focused when it comes to computing and coding.

‘But I never thought that it would get this bad, it’s affected my confidence dramatically.’

Children as young as 12 are guzzling energy drinks to help them stay up late and play video games, experts warned in October last year.

Young people are attracted to such drinks due to their promises of enhanced energy, as well as their low cost and ready availability, a study reveals.

Previous research has linked energy drinks, such as Red Bull, to obesity, heart abnormalities and even sudden death due to their high-sugar and caffeine content.

Most energy-drink consumers are unaware of the products’ main ingredients, health implications or appropriate serving sizes, the current study adds.

Study author Dr Jacinta Francis from the Telethon Kids Institute in Perth, said: ‘Drinking energy drinks to stay alert while playing video games was a common theme that emerged through all of the age groups.

‘I think for the young gamers it would be wise to ban energy drinks.’

A 500ml can of Monster Energy contains 54g of sugars, while the recommended daily allowance of sugar in the UK is 30g.

It also contains 160mg of caffeine, and the packaging usually contains a warning label advising consumers against drinking more than 1.36 litres (48 oz) per day.

Vinnie, who ended up drinking three litres a day, said: ‘It started with three a day at breakfast, lunch, and dinner so I could stay focused during my studies.

‘I often felt tired and needed the energy drinks desperately.’

Several weeks into the new term in October 2017, Vinnie started buying multipacks, which increased his intake and dependence.

Vinnie said: ‘It was value for money and much cheaper than to buy individual cans.

‘But the temptation of having a pack of four and wanting to drink them all at once got hold of me through the caffeine within them.

‘It was like I had to fuel this addiction regularly and if I didn’t I would suffer from caffeine withdrawal symptoms such as severe headaches and muscle pain.’

Ms Pyner said: ‘I started seeing him coming home regularly with multipacks which were the early signs of addiction.

‘I noticed the habitat getting worse and worse as his bedroom bins were always full of the cans.

‘But I never thought that it would get this bad.’ 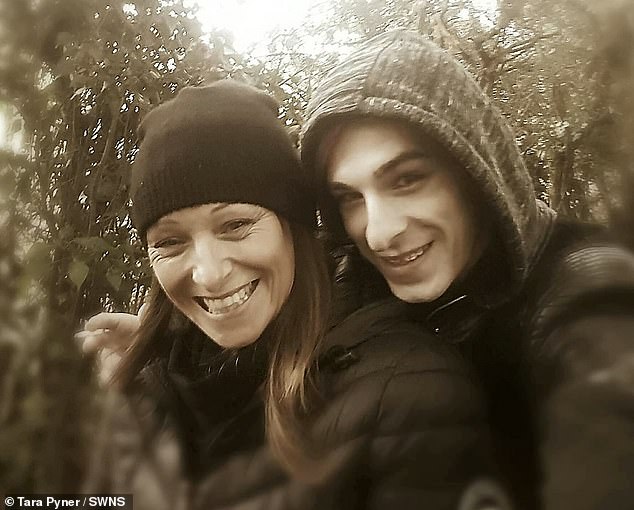 Mr Pyner, pictured with his mother, Tara Pyner, 46, said his confidence has been destroyed. He quit college due to embarrassment, and doesn’t like to leave the house 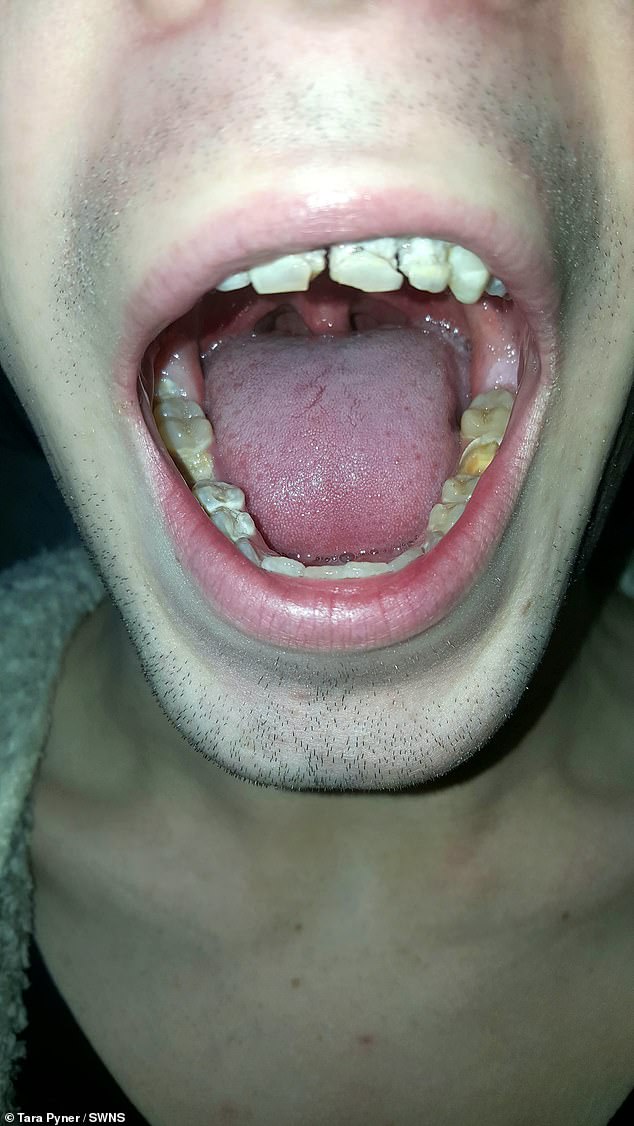 By Christmas 2017, Mr Pyner’s addiction started to take control and starting having another two cans in-between college classes taking his total to six-a-day.

As a result, he started suffering from tooth pain every time he ate.

My Pyner said: ‘Every time I bit down on an item of food it was very painful so it was always a nightmare every time I had something to eat.

‘I was starting to realise that this point that my addiction to Monster drinks was getting much worse.

‘I never thought to tell anyone, I just coped with the pain.’

He claims he brushed his teeth twice a day but started getting tooth pain.

In March 2018, he bit into an apple and heard a cracking sound.

Vinnie said: ‘I didn’t think much about it until I swallowed something hard before realising that my upper four teeth had broken off.

‘I was shocked and at the same time very worried, the damage looked absolutely awful.

‘So I was trying not open my mouth too wide when I was near mum.’

But Ms Pyner got suspicious after several days and asked him to show her his teeth.

She said: ‘It was absolutely shocking. His upper four incisor teeth had completely fallen off and you could see his gum line, it was horrible.

‘Incisors are often the first adult teeth that grow and make up most of our smile, so his smile was completely ruined.

‘At that point, I realised the damage that the Monster Energy drinks had been doing to him, it wasn’t very pleasant at all.

‘As a mum, it was very hard to take in because, for the last seven months, this addiction had taken control of his life.’

Dentists found that all of Vinnie’s teeth had rotted and was told that he would have to have 24 fillings and a pair of dentures fitted for the front four teeth.

Mr Pyner said: ‘The dentist was extremely shocked to see my teeth and she said that it was one of the worst cases of tooth decay and damage that he had ever seen.

‘Looking at my teeth, I realised what I had done, I was in a complete mess.

‘I couldn’t attend college like this so I had to leave because I couldn’t bear the embarrassment.’

As Mr Pyner’s confidence plummeted, he dropped out of college, and now spends all his time at home and rarely goes out at all.

He said: ‘I can’t do much at all, let alone think about my future.

‘I can’t apply for any jobs because interviewers will take one look at my teeth and say no straight away.

‘The smile is the first thing you see in a job interview.

‘I had an ambition to become a games designer but now my hopes have been dashed.’

He started dental treatment in September and hopes to return to college and get a job soon.

Speaking about energy drinks, he said: ‘Stay away from them, they are completely damaging and they could ruin your life.’

ENERGY DRINKS – ARE THEY SAFE?

There has been a stark rise in Britons’ thirst for caffeinated drinks – at least 600 million litres are drunk every year, 200 million more than ten years ago.

Some 55 per cent of those aged between 12 and 24 years old suffer everything from vomiting and chest pains to even seizures from the drinks, despite most consuming less than the recommended one-to-two beverages a day, a Canadian study found last January.

As well as the drinks’ alarmingly high caffeine levels, the researchers believe consuming them with alcohol or during exercise makes them even more dangerous.

Previous research has linked energy drinks, such as Red Bull, to obesity, heart abnormalities and even sudden death due to their high-sugar and caffeine content.

Most energy-drink consumers are unaware of the products’ main ingredients, health implications or appropriate serving sizes, experts have said.

How much caffeine do they contain?

A 250ml serving of a typical energy drink – half the standard bottle or can size – contains 80mg of caffeine per litre – twice as much as a regular cola drink, but the same as a 60ml espresso.

Experts have warned that caffeine-packed energy drinks could be fuelling a record rise in diagnoses of irregular heartbeats, one of Britain’s biggest killers.

Just one energy drink daily could trigger arrhythmia, an abnormal heart rhythm which increases the risk of stroke five-fold.

It is thought that this is because excessive caffeine consumption dramatically increases the amount of calcium released within the heart’s cells, disrupting the electrical rhythm.

Experts also warn the addition of high quantities of sugar in energy drinks could be a reason for their potency.

How much sugar do they contain?

The worst offending drink for sugar content is the Punched Energy and Tropical Guava Flavour product from Rockstar, which contains a staggering 78g, or 20 teaspoons, of sugar per 500ml serving – more than three times the daily recommendation of 25g for women and 38g for men.

The brand’s Super Sours Energy Drink Bubbleburst and Xdurance Performance Energy Blueberry, Pomegranate and Acai Flavour each have 70g, or 17 teaspoons, per 500ml.

Campaigns, such as Action on Sugar have called for a complete ban on the products for under 16s.

Their study in December 2017 found the average sugar content was more than an adult’s entire maximum daily recommendation for sugar intake in the UK.

Likewise, 78 per cent of products exceeded the maximum daily recommendation for sugar intake for a child aged seven to ten 10 years – 24 g or six teaspoons.

Certain manufacturers reformulated before the Soft Drinks Industry Levy in April 2018 in the UK.