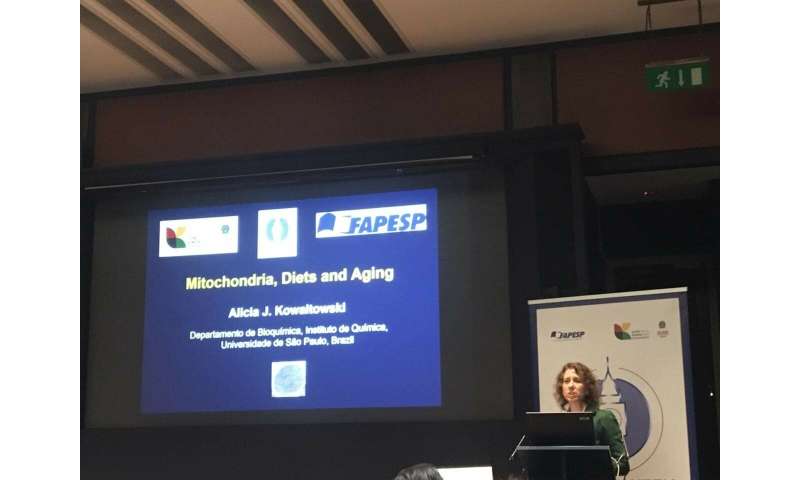 The number of calories a person eats directly influences the performance of cells. A group of researchers from the University of São Paulo (USP) has shown that low-calorie meals have a protective effect against some diseases. Related studies were presented on day one of FAPESP Week London, taking place February 11-13, 2019. The studies were conducted under the auspices of the Center for Research on Redox Processes in Biomedicine .

“We are looking at how changes to the diet affect metabolism and how that ends up changing the odds of having diseases associated with aging,” said Alicia Kowaltowski, a professor at the USP Chemistry Institute (IQ-USP). One of the group’s experiments on mice shows that a low-calorie diet can protect the brain from neuronal cell death associated with diseases such as Alzheimer’s, Parkinson’s, epilepsy and cerebral vascular accident (CVA).

The mice were divided into two groups. The researchers calculated the average number of calories the group with no caloric restrictions would eat and then fed the other group 40 percent fewer calories. After 14 weeks, mice belonging to the two groups were given an injection containing a substance known to cause seizures, damage and neuronal cell death.

While the animals in the group that had no dietary restrictions had seizures, the animals whose calories had been restricted did not. The researchers then studied what occurred in vitro. To do that, they isolated the organelles of the brains of the mice, which were also divided into two groups: those that had unrestricted diets and those that had restricted diets. When calcium was introduced to the medium, they noted that uptake was greater in the mitochondria belonging to the group that had ingested fewer calories.

Mitochondria are the organelles responsible for energy generation in cells. In the case of the mice subjected to a calorie restricted diet, mitochondria increased the calcium uptake capacity in situations where the level of that mineral was pathologically high.

In the pancreas, caloric restriction has shown to be capable of improving cell response to increased levels of blood glucose. The researchers reached this conclusion after conducting experiments using beta cell cultures that remain in the pancreatic islets and are responsible for producing insulin.

Blood serum from mice subjected to a variety of diets, similar to the study on the effects of caloric restriction on neurons, was used to nourish the cells cultivated in vitro. In the cells treated with the serum of animals that ate fewer calories, insulin secretion through the beta cells occurred normally: low when glucose was low and high when glucose was elevated. This did not occur in the animals that ate more calories (and became obese). The experiment showed that there may be a circulating blood factor that acutely modifies beta cell function.

Researchers have again raised the hypothesis that the phenomenon is related to the mitochondria, since insulin secretion depends on the availability of ATP (adenosine triphosphate, the molecule that stores energy) in the cell. When they measured oxygen consumption by the two groups of cells, they observed that it was higher in cells that received serum from animals subjected to caloric restriction. Since respiration is responsible for the release of insulin during peak glucose, it was a sign that the cells generated more ATP under that condition.

Other experiments have also shown that the mitochondria of cells treated with serum from animals subjected to caloric restriction exchanged more material with each other, which made them more efficient.

Kowaltowski pointed out that understanding how metabolism works is essential for preventing and curing metabolic diseases like obesity. It is well-known that being obese is one of the prognostic factors of unhealthy aging.

“Obese individuals are much more likely to have age-related diseases. This includes neurodegenerative diseases like Alzheimer’s, proliferative diseases like cancer, and metabolic diseases themselves, such as Type 2 diabetes, hyperlipidemia, heart attack and CVA. Obese people have a higher incidence of all of these,” said the researcher.