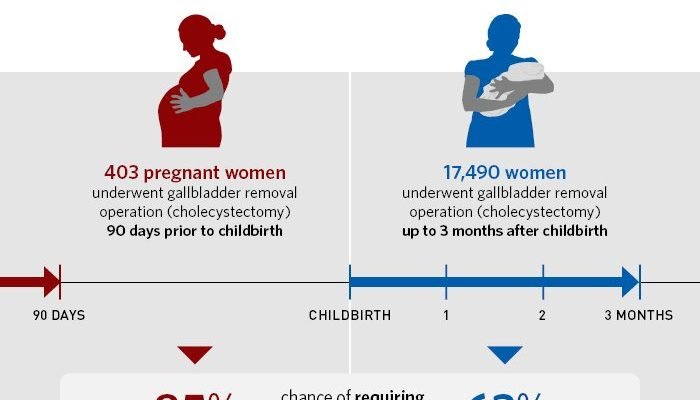 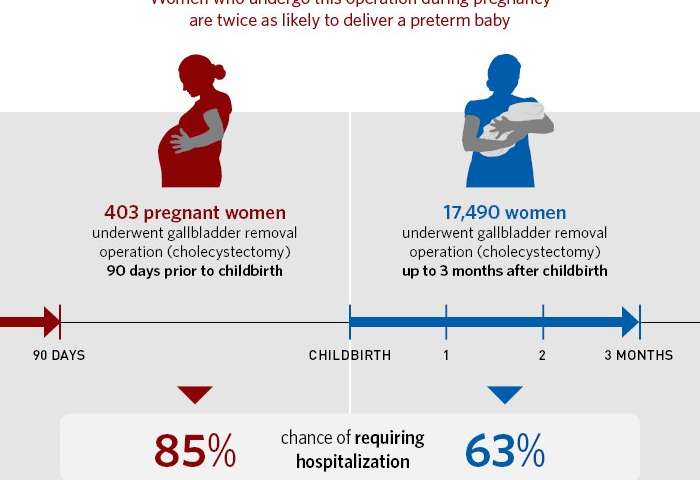 Pregnant women produce extra progesterone, which puts them at greater risk for gallstones. When the stones become problematic, causing painful attacks, a surgeon may recommend that the diseased gallbladder be taken out by performing an operation known as a cholecystectomy. However, new research findings suggest the timing of the operation may increase the risk of adverse outcomes for pregnant women.

Women who have their gallbladder removed during pregnancy are more likely to experience longer hospital stays, increased 30-day readmissions, and higher rates of preterm delivery than those who delay the operation until after childbirth, according to the study results published online as an “article in press” on the Journal of the American College of Surgeons website in advance of print publication.

“In light of these findings, whenever possible, women with symptomatic gallstones in pregnancy should wait as long as possible to let the baby mature before having the cholecystectomy,” said study coauthor Henry A. Pitt, MD, FACS, professor of surgery at Temple University School of Medicine, Philadelphia.

Dr. Pitt and colleagues studied a large database of women in California (the California Office of Statewide Health Planning and Development database) who underwent a laparoscopic or open cholecystectomy between 2005 and 2014 for gallstones or other benign biliary disease. They compared 403 pregnant women who underwent the operation within 90 days prior to childbirth with 17,490 women who had the procedure within three months after childbirth.

Most patients who undergo a minimally invasive (laparoscopic) cholecystectomy can go home the same day. However, the analysis showed that when a cholecystectomy was performed during pregnancy, it was more likely to require hospitalization (85 percent versus 63 percent) and more likely to be an open operation, whereby the surgeon uses a scalpel and makes an incision (13 percent versus 2 percent).

One important finding was that maternal delivery outcomes—including eclampsia and hemorrhage for the mother, and preterm delivery—were significantly worse when the cholecystectomy was done during pregnancy as opposed to postpartum, Dr. Pitt said.

The eclampsia rate for pregnant women who underwent this operation in the third trimester was 1 percent higher than those who chose to wait until after childbirth. Additionally, the hemorrhage and preterm delivery rates for women who had the cholecystectomy during pregnancy was 3 percent and 12 percent higher, respectively.

“The real significant finding is that babies were being born preterm when they weren’t adequately developed. And we know that preterm delivery is associated with neonatal mortality and multiple adverse outcomes for the baby,” Dr. Pitt said. “So that is the real reason to wait: to make sure the outcome for the baby is the best possible outcome.”

The initial analysis also found that women who underwent cholecystectomy in the third trimester had a longer length of hospital stay (three days versus one day), higher cost of hospitalization ($19,918 versus $17,461), and higher 30-day readmission rates (10 percent versus 4 percent) compared with the postpartum group.

For now, operative guidelines from the Society of American Gastrointestinal and Endoscopic Surgeons recommend laparoscopic cholecystectomy for all pregnant women with symptomatic gallstones and state that the procedure is safe for both the mother and the fetus.

However, Dr. Pitt believes that these study results support a change in practice because recommendations in the guidelines are based on older studies instead of current data. “These big databases like the one we used in California just didn’t exist 15 years ago,” Dr. Pitt explained.