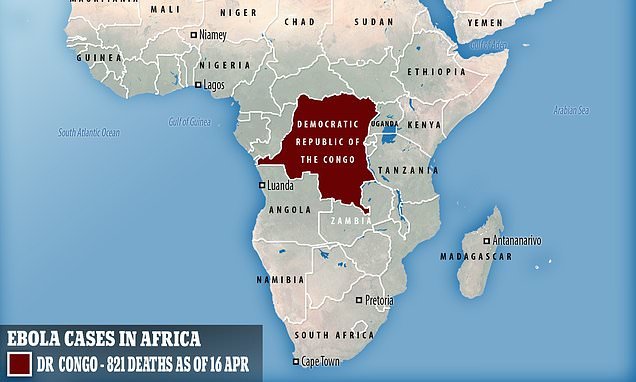 Countries around the world need to work harder to stop the Ebola outbreak in the Democratic Republic of the Congo, politicians have warned.

The African nation’s new president said he wants the epidemic, which has already killed at least 821 people, to end in the next three months.

And the UK’s International Development Secretary, Penny Mordaunt, said other countries need to ‘step up’ and do their part in tackling the virus.

The current outbreak began in August and has infected more than 1,200 people, killing almost two thirds of them. 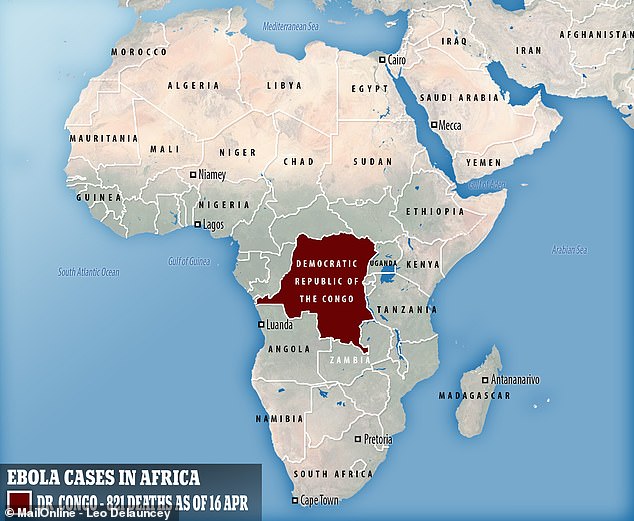 The Ebola outbreak in the Democratic Republic of the Congo has killed more than  800 people already and infected more than 1,200. The epidemic has killed around 65 per cent of everyone it’s infected 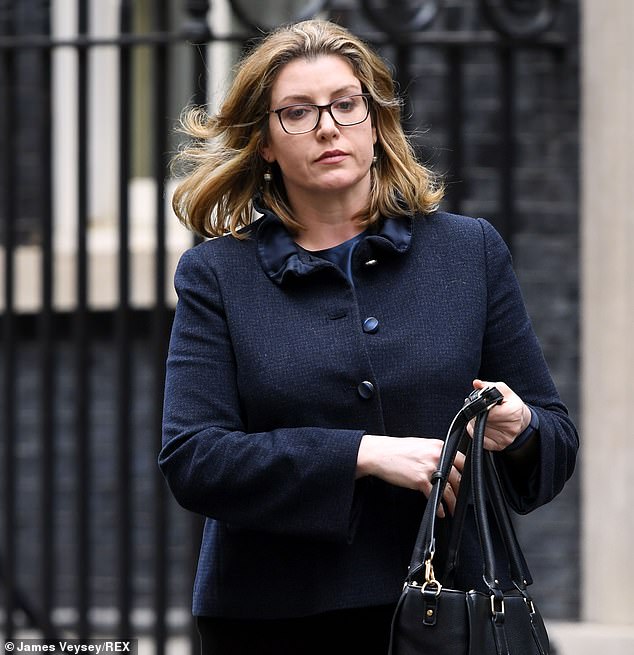 Penny Mordaunt, International Development Secretary, said more countries need to contribute to the efforts to stop the Ebola outbreak in the Democratic Republic of the Congo 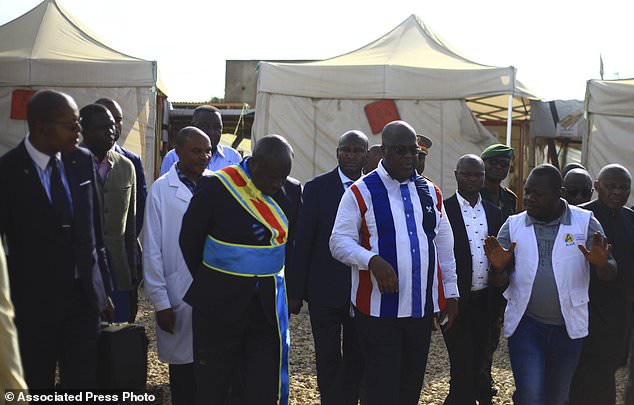 Congo’s president, Felix Tshisekedi (pictured in the striped shirt) visits an Ebola treatment centre in Beni, Eastern Congo on Tuesday April 16, 2019. He said he wants to see the deadly outbreak contained in less than three months

Ms Mordaunt said: ‘We know all too well the deaths and devastation that Ebola can inflict on communities.

‘Despite efforts to control the outbreak in the Democratic Republic of Congo, the virus continues to claim more lives each week.

‘The UK has been a major donor since the start. But this outbreak requires a truly global response if we’re to stop this threat.

‘It’s time for other countries to step up. Diseases like this do not respect borders and it’s in all of our interests to help contain the spread of Ebola.’

The Government has previously refused to disclose how much it has donated to DRC’s Ebola fight, in order to avoid health workers being targeted by criminals.

But the World Health Organization said it has received £60million ($79m) so far, and needs another £113million ($148m) to keep going for the next six months.

Ms Mordaunt’s comments came on the same day the newly installed president of the DRC said he wants the outbreak to end within three months. 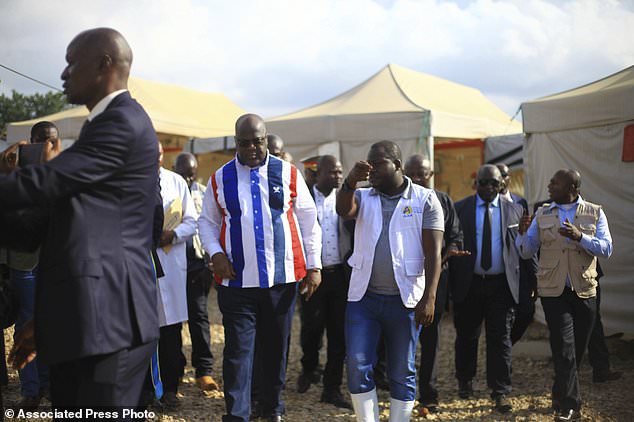 If the Ebola outbreak continues, President Tshisekedi (pictured in stripes) said: ‘People will be scared to visit the region’. He also called for armed rebels to be stripped of their guns 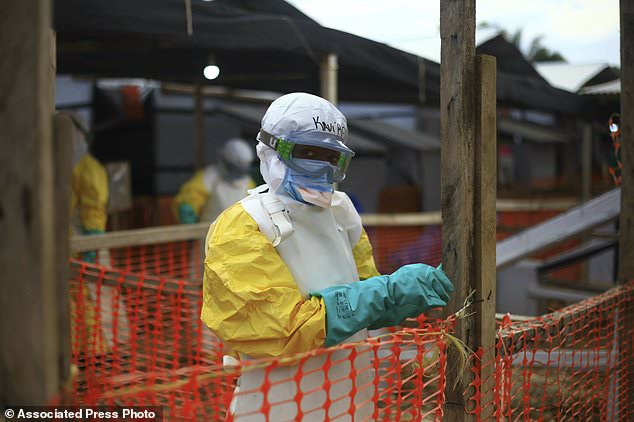 An Ebola health worker is seen at a treatment center in Beni, Eastern Congo on Tuesday April 16, 2019 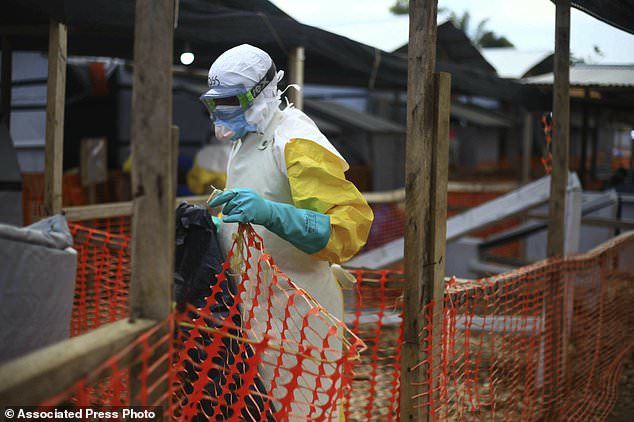 An Ebola health worker is seen at a treatment centre in Beni, Eastern Congo – the outbreak has been taking place in the north-east of the country

Felix Tshisekedi visited the east of the country, where the outbreak is happening, earlier this week and set a timeline in which he hopes it will end.

He has vowed to offer more protection to health workers, who have come under repeated attack during the past nine months.

And he called on local communities to co-operate with aid workers as he warned them Ebola is a real threat – many people do not believe the disease exists.

‘It is not an imaginary disease,’ he said after arriving in the city of Beni on his first tour of the region since he was inaugurated in January.

‘If we follow the instructions, in two or three months Ebola will be finished.’ Mr Tshisekedi also called for violent militia to be stripped of their guns and weapons.

He said: ‘The time of armed groups is over. The new government is reaching out to these children of the country to surrender arms through disarmament programmes.’ 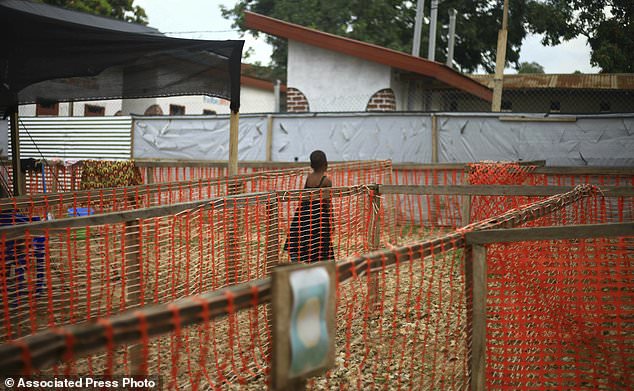 A child suspected of having Ebola virus is seen at a treatment centre in Beni, Eastern Congo, Tuesday April, 16, 2019. Congo’s president on Tuesday said he wants to see a deadly Ebola virus outbreak contained in less than three months even as some health experts say it could take twice as long. (AP Photo/Al-hadji Kudra Maliro)

If the Ebola outbreak continues, Mr Tshisekedi added, ‘people will be scared to visit the region’.

The current outbreak of Ebola is the 10th ever suffered by the DRC, where the virus was first discovered in 1976.

It’s the second worst outbreak the world has ever seen, behind only the devastating epidemic in West Africa in 2014.

The UN last week said this outbreak is of ‘deep concern’ but argued it is not a global emergency.

But one top Red Cross official said he was ‘more concerned than I have ever been’ about the potential of Ebola spreading to another region.

He called that rate unprecedented in this outbreak.

WHAT IS EBOLA AND HOW DEADLY IS IT?

Ebola, a haemorrhagic fever, killed at least 11,000 across the world after it decimated West Africa and spread rapidly over the space of two years.

That epidemic was officially declared over back in January 2016, when Liberia was announced to be Ebola-free by the WHO.

The country, rocked by back-to-back civil wars that ended in 2003, was hit the hardest by the fever, with 40 per cent of the deaths having occurred there.

Sierra Leone reported the highest number of Ebola cases, with nearly of all those infected having been residents of the nation.

WHERE DID IT BEGIN?

An analysis, published in the New England Journal of Medicine, found the outbreak began in Guinea – which neighbours Liberia and Sierra Leone.

A team of international researchers were able to trace the epidemic back to a two-year-old boy in Meliandou – about 400 miles (650km) from the capital, Conakry.

Emile Ouamouno, known more commonly as Patient Zero, may have contracted the deadly virus by playing with bats in a hollow tree, a study suggested.

HOW MANY PEOPLE WERE STRUCK DOWN?

Figures show nearly 29,000 people were infected from Ebola – meaning the virus killed around 40 per cent of those it struck.

Cases and deaths were also reported in Nigeria, Mali and the US – but on a much smaller scale, with 15 fatalities between the three nations.

Health officials in Guinea reported a mysterious bug in the south-eastern regions of the country before the WHO confirmed it was Ebola.

Ebola was first identified by scientists in 1976, but the most recent outbreak dwarfed all other ones recorded in history, figures show.

HOW DID HUMANS CONTRACT THE VIRUS?

Scientists believe Ebola is most often passed to humans by fruit bats, but antelope, porcupines, gorillas and chimpanzees could also be to blame.

It can be transmitted between humans through blood, secretions and other bodily fluids of people – and surfaces – that have been infected.

IS THERE A TREATMENT?

The WHO warns that there is ‘no proven treatment’ for Ebola – but dozens of drugs and jabs are being tested in case of a similarly devastating outbreak.

Hope exists though, after an experimental vaccine, called rVSV-ZEBOV, protected nearly 6,000 people. The results were published in The Lancet journal.