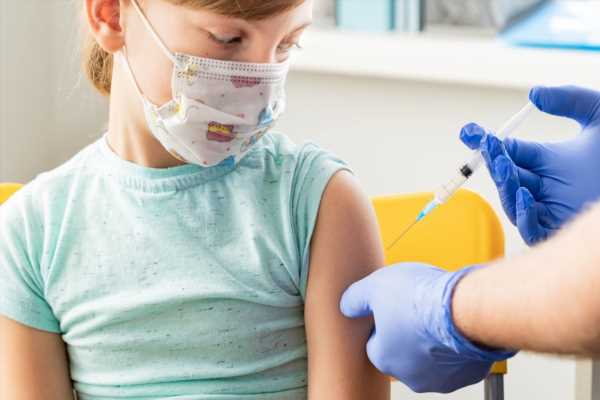 In a recent study posted to the Preprints with The Lancet* server, researchers evaluated the effectiveness of the BNT162b2 vaccine against the new severe acute respiratory syndrome coronavirus 2 (SARS-CoV-2) variant of concern (VOC) Omicron in five to 11-year-old children of Ontario, Canada.

They used a multivariable logistic regression model to describe the vaccine effectiveness (VE) of BNT162b2 against Omicron by dosing interval and from the time since vaccination up to 90 days following vaccination.

Only a few studies have evaluated the effectiveness of the messenger ribonucleic acid (mRNA)-based SARS-CoV-2 vaccines, including BNT162b2, in preventing Omicron infections in five to 11-year-old children. Published studies had estimated 31% VE against Omicron infection for this age group in the United States (US) and 68 to 74% against hospitalization.

In the present study, researchers used a test-negative design to estimate the VE of the BNT162b2 vaccine in preventing symptomatic infection and severe outcomes due to Omicron infection in the age group of five to 11 years between January 2 and May 28, 2022.

They used the first incidence of reverse transcriptase-polymerase-chain-reaction (RT-PCR) confirmed Omicron infection for analyses. Further, they identified severe cases from the Public Health Case and Contact Management Solution (CCM) by the date of COVID-19-related hospitalization and death up to May 28, 2022. They obtained all COVID-19 vaccination data from Canada's centralized information system – COVaxON. The team used multivariable logistic regression models to compute adjusted odds ratios (aOR) in vaccinees and controls.

Further, they estimated the VE of one and two doses of the BNT162b2 vaccination and defined VE as (one minus the OR) X 100%. They calculated VE at ≥14 days following the first dose and ≥7 days after the second dose. The team used standardized differences to compare test subjects with controls and vaccinated and unvaccinated children, with values >0.10 considered clinically relevant.

In the current study, the VE of two doses of the BNT162b2 vaccine against symptomatic Omicron infections was 67% among five to 11-year-old children. However, VE was lower (23%) after one dose of BNT162b2. Against severe outcomes, VE was initially high after a second dose (94%) but declined over time. VE also waned over time within each dosing interval group, with a slower waning occurring only ≥90 days after the second dose with the ≥56 days interval.

Overall, BNT162b2 conferred adequate protection against Omicron infection and severe illness among five to 11-year-old children. Further studies should evaluate the duration of the observed protection, especially with the emergence of more Omicron sub-variants.

Preprints with The Lancet publish preliminary scientific reports that are not peer-reviewed and, therefore, should not be regarded as conclusive, guide clinical practice/health-related behavior, or treated as established information.

Neha is a digital marketing professional based in Gurugram, India. She has a Master’s degree from the University of Rajasthan with a specialization in Biotechnology in 2008. She has experience in pre-clinical research as part of her research project in The Department of Toxicology at the prestigious Central Drug Research Institute (CDRI), Lucknow, India. She also holds a certification in C++ programming.