Since the pandemic started, Alex Nazarewicz has noticed something missing from his daily rides: road rage.

A life-long cyclist, the 35-year-old had become familiar with being “brushed by cars” and feeling threatened on the road. 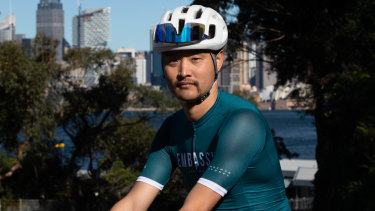 “It’s not every ride but once a week or once a fortnight people try to do something really aggressive,” he says. “It just wears you down.”

With the lack of traffic however, cyclists around the country are free to roam without feeling unsafe.

For the many lowlights brought about by COVID, one highlight is that more people are getting in the flow using pedal power. In 2020-21, a record 1.75 million bikes were sold in Australia and, in the past year, 624,000 people have taken up cycling. According to AusPlay research, it is the one sport where the participation increase is made up of similar numbers of men and women.

And while Nazarewicz rides up to 25,000 kilometres a year, it’s not just the serious cyclists taking to the streets.

In scenes so lovely they deserve a Burt Bacharach soundtrack, families around Australia are riding their bikes together.

Nicole Adamson, the GM of participation and advocacy at AusCycling, refers to herself as a “bike rider”: “If you ask someone if they’re a ‘cyclist’ a lot of people will only relate if they’re somebody who has a reasonable bike and generally wears Lycra.”

Bike riders however can have baskets on their bikes and ride in tracksuit pants, if they so desire: “They’re out on their bikes as a social activity or for fun or fitness… no Lycra necessary.” 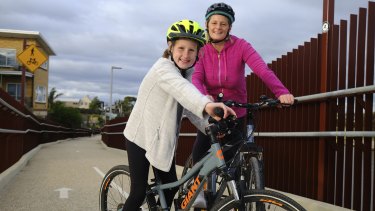 She has taken advantage of the quieter streets around where she lives in Bon Beach, south-east of Melbourne, to ride with her 10-year-old daughter.

“With COVID and less traffic it’s been an ideal opportunity to get out and to try that in a safer environment,” says Adamson, who has spearheaded the Ride Nation Schools programs, teaching primary-age children riding skills and confidence.

She worried the program might peter out during the lockdowns, but the opposite has happened: “Term 2 is normally one of our quietest terms, however in Term 2 this year we saw an increase of 219 per cent from previous years.”

With more children wanting to ride, families have been provided with an opportunity to get out of the house, to get active together and still meet the restrictions.

“What that’s done is get a whole lot of mums out on their bikes with kids,” Adamson says. “I think it helps them rediscover the joy of what riding a bike is all about and remember what it was like when you were a kid.”

Professor Chris Rissell from the University of Sydney’s faculty of Medicine, agrees adding that there are plenty of benefits to bike riding.

“It can reduce your risk of heart disease by about half if you’re doing it regularly,” says Rissell, an expert in active transport and public health. “And there’s a dose-response relationship so the longer you ride, the better the health benefits are.”

Being out in nature and riding with others confers mental and social health benefits too, he adds, pointing out that cyclists have as much right to be on the road as anyone else.

“People don’t understand they can ride two abreast in a lane and that’s legal,” he explains.

Although Rissell suspects that there is more “bad driving” and thoughtlessness than road rage towards cyclists, the perception of safety, or lack there-of, has been a persistent obstacle.

“Many people who currently drive would rather ride a bike, but the biggest barrier to increasing the uptake of bike riding is how unsafe someone feels when riding, particularly in the presence of car traffic,” says Dr Ben Beck, the head of Sustainable Mobility and Safety Research at Monash University.

Recent pop-up bike lanes around Sydney and Melbourne, however, have led to 97 per cent of riders feeling safer, says Stephen Hodge, the director of not-for-profit WeRide Australia. That sense of increased safety is reflected in the number of people using them.

Between July 2020 and April 2021, more than 500,000 trips had been taken across Sydney’s inner-city pop-up cycleway network, while about 6000 people a week have been using Melbourne’s Heidelberg Road pop-up lanes.

The sense of safety also translates in the number of injuries, adds Dr Beck.

“We know that providing infrastructure that separates bike riders from motor vehicles by a physical barrier, such as protected bike lanes, can reduce injury rates by up to 90 per cent.”

While more people are riding their bikes outside and discovering “the freedom” they offer, as Nazarewicz puts it, there is a simultaneous boom happening indoors.

Use of the indoor trainer Zwift increased by 313 per cent during the 2020 lockdown, iFIT business in Australia (including the NordicTrack bike) has more than doubled in the past 18 months, while Peloton, the wildly popular interactive fitness brand, made its Australian debut in July.

Karen Lawson, the local chief executive for Peloton, says a love of fitness and music, a desire to be mentally and physically well along with being time-poor are what unites its users, who she says are split fairly evenly between men and women.

“I think we’ve become more used to ‘I want it now, I want it localised and I want it personalised’,” Lawson says. “We’ve become used to that with shopping and something like Uber Eats, so the idea of going to the gym feels a bit antiquated…

“I think anyone that’s trying to raise a family, male or female, will recognise that it’s not easy doing that and trying to balance your wellbeing especially if you’re trying to leave the house for a class.”

So whether its freedom in when you ride, or freedom found on your ride, there are plenty of reasons to put the wheels in motion and join in the sport that’s won over 2.99 million Australian adults.