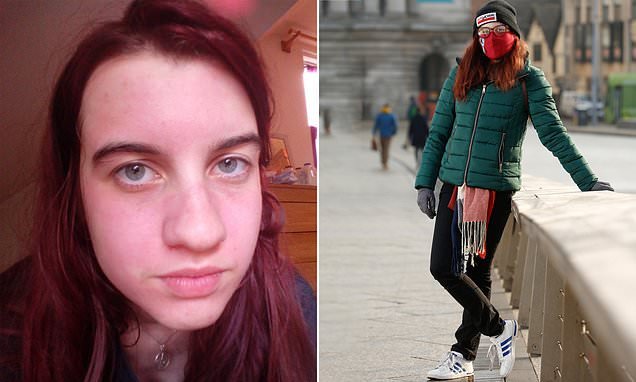 The woman who could be KILLED by the cold: 23-year-old suffers rare allergy that can trigger anaphylactic shocks if she inhales cold air or drinks a cool drink

A 23-year-old woman could be killed by the cold air or a chilled drink because she suffers from a rare allergy.

Max Fisher, from Nottingham, was diagnosed with cold-induced urticaria in 2009, when she struggled to breathe after sitting on wet grass in the summer.

Miss Fisher experiences red, itchy hives and her throat closes up because of her allergy to the cold, which could trigger anaphylactic shock.

She must wear a face mask outside in case a drop in temperature causes a fatal reaction, but has suffered abuse from strangers for doing so.

Urticaria, also known as hives, is estimated to affect around one in five people at some point in their lives, according to the NHS.

But cold-induced urticaria makes up about one to three per cent of all urticaria cases, according to the National Organisation of Rare Disorders. 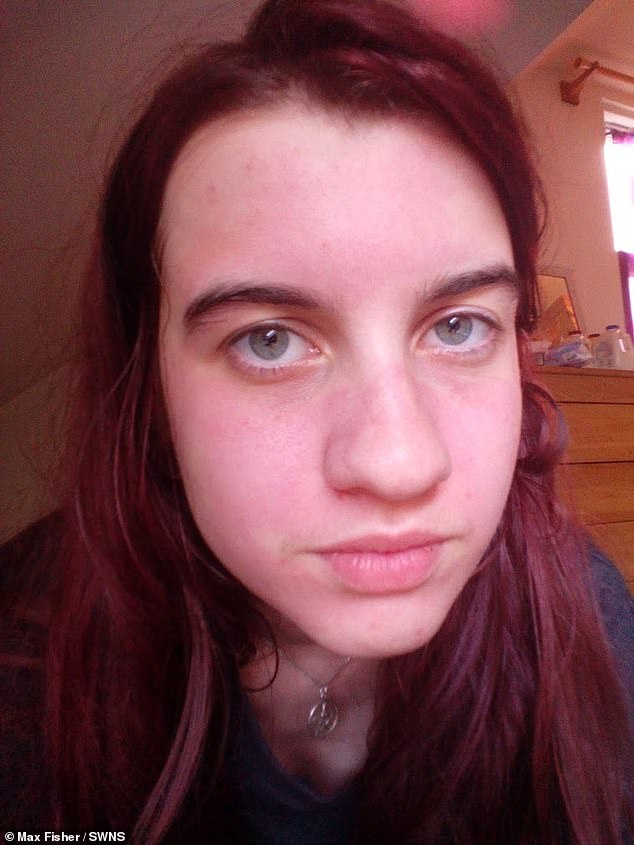 Max Fisher, 23, could be killed by the cold due to a rare allergy called cold urticaria. Her face comes up in a red rash and swelling appears when exposed to some temperatures 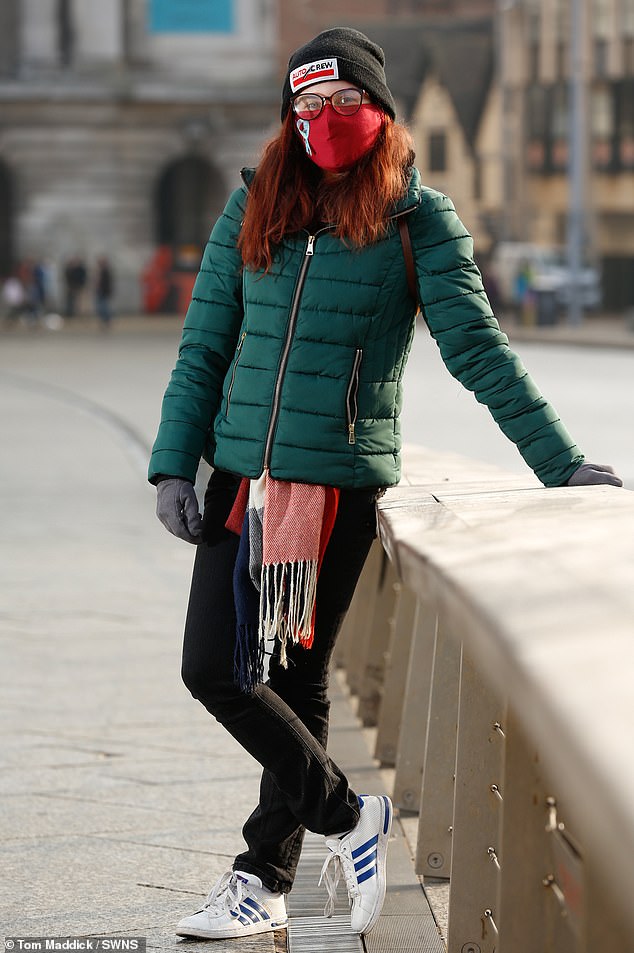 Miss Fisher, of Nottingham, must wear a mask and multiple layers of clothing when she goes outside, which has led to her suffering abuse in the street 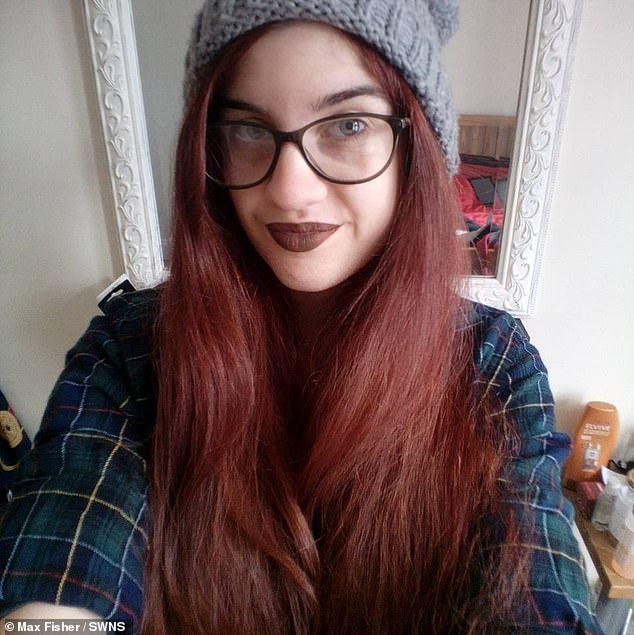 Miss Fisher was diagnosed with the cold urticaria in 2009. The condition affects an estimated one in five people at some point in their lives, according to the NHS

Cold-induced urticaria is an auto-immune disease, which causes her to break out in hives which burn and itch, and can spread across her entire body, varying in size.

In extreme cases, she can go into anaphylactic shock – which can prove fatal without urgent medical treatment.

Miss Fisher, a pharmacology graduate, said:  ‘I’m allergic to the cold so I’m basically allergic to winter. I wear a face mask outdoors to prevent a reaction.

‘The symptoms are mostly an urticarial rash, big swollen, hot and very itchy.’

But it’s not as simple as moving to a warm country, as in the summer ice in her drink causes her fingers to swell.

Opening a fridge or freezer, jumping into a pool or a breeze can chill her, causing a reaction.

Miss Fisher first experienced a breakout when she was 14, on a hot day in the middle of summer.

She developed breathing difficulties after sitting on wet grass, but it wasn’t clear why to begin with. 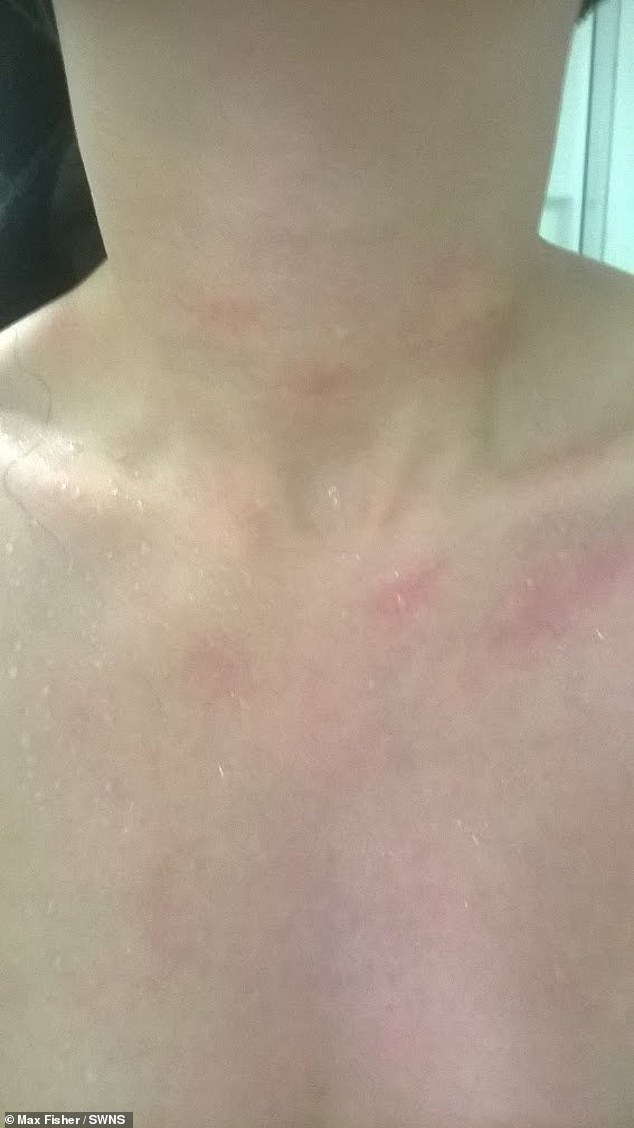 Miss Fisher breaks out in hives which burn and itch, and can spread across her entire body, varying in size. It can be triggered by ice in a cold drink or opening a fridge

WHAT IS COLD URTICARIA?

Cold urticaria is a skin reaction that causes it to break out in hives when exposed to low temperatures.

Other symptoms include swelling of the hands when holding cold objects, and the lips and throat when drinking chilled beverages.

In severe cases when the entire body is affected, sufferers may experience fainting, a racing heart, shock, and swelling of the tongue and throat, which can prevent breathing.

Anyone can develop cold urticaria, however, people are more at risk if they are young, have recently had an infection, have an underlying condition or have inherited certain genetic traits.

Cold urticaria often goes away on its own but can be treated via antihistamines and avoiding temperatures below 39°F (4°C).

Essential cold urticaria makes up about one to three per cent of all urticaria cases, according to the National Organisation of Rare Disorders.

Urticaria, also known as hives, is estimated to affect around one in five people at some point in their lives, according to the NHS.

Her symptoms were mistaken for a pollen allergy for the several weeks, and she claims even now some medical professionals don’t understand her condition.

She said: ‘It was a summer’s day and I just sat down on the wet grass and suddenly started wheezing and struggling to breathe.

‘I got an itchy red rash all over my arms and I had no idea what was going on.

‘Initially doctors thought it was a pollen allergy but further tests revealed it was urticaria.

‘Apparently the wet grass on my skin cooled it so much that it triggered the reaction.’

Miss Fisher added: ‘It’s scary when it happens because I don’t know if my throat will close up completely but now I take antihistamines every day just in case I suffer another reaction.

‘The summer is just as bad as the winter and I’ve come out in hives after walking into an air-conditioned room before.

‘As long as I’m of a constant, medium temperature with no sudden drops in the temperature I’m ok but it is a daily battle.’

The exact cause of cold-induced urticaria is not known.

Rarely, it may be associated with an underlying blood condition or infectious disease, according to National Institutes of Health, and is not likely to be inherited.

As a child, Miss Fisher was health and adventurous.

She said: ‘I was quite an outdoorsy person before I was diagnosed with the condition.

‘I used to go to car shows with my dad all the time. I would just do typical kid stuff like running around and climbing trees.’

Now, in the coldest months of the year, Miss Fisher must wear a mask outdoors, leading to stares from the public. 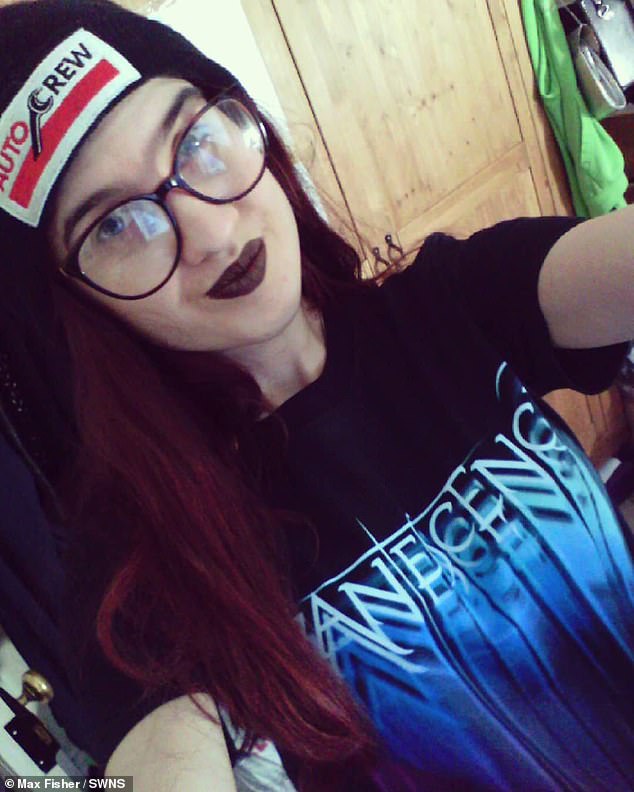 Miss Fisher first saw symptoms when she sat on wet grass in the summer. The condition can affect her all year round, due to air conditioning or cold pools 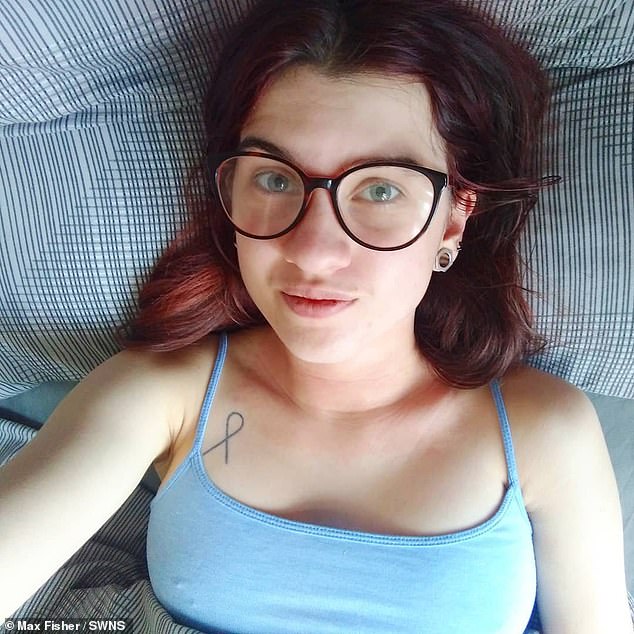 Alongside cold urticaria, Miss Fisher also has fibromyalgia, which causes pain all over the body and fatigue. She is trying to raise awareness of disabilities and allergies

She said: ‘When I wear the mask people stare and I get abuse in the street sometimes.

‘Sometimes I don’t want to deal with that just to go to the shops and get a bag of crisps from the shop. People wear masks for all sorts of reasons.

‘If I breathe in cold air, I get wheezy, so when I put the mask on it’s coming through slightly warmed material.

‘That mixes with the warm air that I have just breathed out – so it takes the edge of any cold that is out there.

‘I would love it if more people were aware of urticaria.’

Alongside cold urticaria, she has fibromyalgia, which causes pain all over the body and fatigue.

She is sometimes wheelchair-bound due to the severity of her symptoms, believing employees use it against her.

‘I live with chronic pain and sometimes I use a walking stick or a wheelchair,’ Miss Fisher said. ‘Trying to find work is just such a struggle.

‘It’s so frustrating – I’ve worked really hard – I have a Master’s degree in pharmacology.

‘I’ve done all of this hard-work and put myself out there and employers are just “ah, wheelchair”.

‘I was really nervous at first, to be like I can get out of the wheelchair, I can walk a little bit. So I don’t have to be in a box of can’t or can walk.