The man whose testicle pain turned out to be TUBERCULOSIS: 38-year-old was wrongly feared to have cancer before doctors discovered the infection

A man was diagnosed with testicular tuberculosis (TB) after battling pain down below.

The man – who has not been named – went to as hospital in Frimley, Surrey, complaining of an ‘intensely’ painful left testicle for the past four days.

After feeling a tender 5x4cm (2insx1.5ins) lump in his testicle, doctors diagnosed him with inflammation of the tube at the back of the reproductive organ, which is known as epididymitis.

But when antibiotics failed to ease his suffering, the man returned, with medics worrying he may have testicular cancer.

The man – who moved to the UK from Sudan in 2017 – then mentioned he has been battling fatigue, fever and weight loss ever since he visited his TB-infected cousins in the African country six months ago.

Fluid samples taken from his testicle confirmed he had the infection, which most commonly affects the lungs.

And, after six months on ‘TB chemotherapy’, he was declared disease-free. 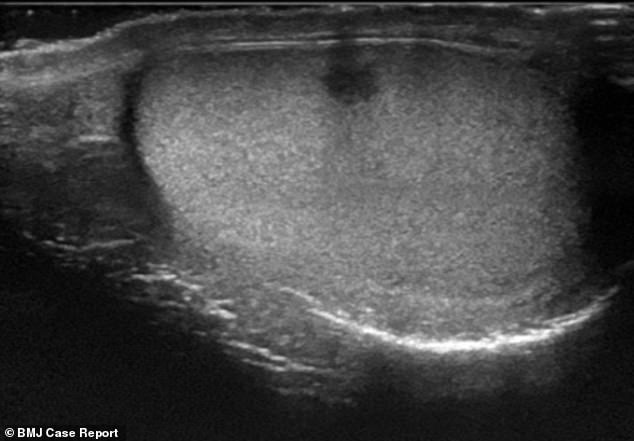 Scan is of the unnamed patient’s right testicle. Although it was the left that was painful, an examination revealed a 3x5mm lump in his right testicle, which raised the fear of cancer

The BMJ Case Report was written by doctors at Wexham Park Hospital and led by urological surgeon Dr Nishant Bedi.

England currently has its lowest rate of TB for the past 30 years, with two-thirds of sufferers being born abroad, particularly in high-risk regions like Sub-Saharan Africa and Asia.

Testicular TB is rare and makes up just 1.6 per cent of the total number of TB cases in England.

Although it is the second most common form of TB outside the lungs, only 89 cases were reported in England in 2016.

Due to its rarity, and the fact symptoms often mimic testicular cancer, diagnosis is often delayed or missed.

This can lead to infertility or cause the TB to spread and become life-threatening.

And as many as 69 per cent of patients even have a testicle unnecessarily removed due to doctors wrongly believing it is cancerous.

The patient, who does not speak English as his first language, went to the emergency department of Wexham Park Hospital complaining of pain that had not been relieved with paracetamol.

WHAT IS TESTICULAR TUBERCULOSIS?

Testicular tuberculosis (TB) is a form form of the bacterial infection that occurs in a man’s reproductive organs.

Extra-pulmonary TB – when the infection is outside of the lungs – affects just ten-to-15 per cent of patients.

Testicular TB usually causes pain and swelling down below, as well as possible ulceration or an unusual discharge.

Untreated, it can lead to infertility.

It is often initially misdiagnosed as testicular cancer due to the similar symptoms, with some patients even having the organ unnecessarily removed.

In very rare cases, the affected testicle(s) may have to be removed.

After failing to improve with the first five-day course of antibiotics he was prescribed, doctors tried him on a new type of the drug, including an intramuscular injection.

The medics then discovered a 3x5mm lesion in his right testicle, which had previously gone unnoticed.

Concerned it may be cancerous, the patient had a chest and pelvic scan.

Results revealed he had swollen lymph nodes in his chest and an accumulation of fluid in his left testicle.

When an interpreter was brought in, the patient explained the symptoms he had been battling for six months, as well as his two-month back pain.

This prompted the doctors to suspect TB, which was confirmed via DNA testing of fluid from the patient’s scrotum.

He was then prescribed a standard course of four TB antibiotics for two months and then two other types of the drug for four months.

The patient’s back pain eased after six weeks and he made a full recovery in six months.

He did, however, develop a 2.5cm (1ins) ulcer on his scrotum, which cleared up on its own.

They urge medics to consider the diagnosis in those who are showing signs of an infection that is not improving.

Tuberculosis (TB) is a bacterial infection spread between people by coughing and sneezing.

The infection usually affects the lungs but the bacteria can cause problems in any part of the body, including the abdomen, glands, bones and the nervous system.

In healthy people the bacteria are often killed by the immune system or at least prevented from spreading, but in some cases the bacteria can take hold and cause a more serious infection.

TB infection causes symptoms like fever, coughing, night sweats, weight loss, tiredness and fatigue, a loss of appetite and swellings in the neck.

If the immune system fails to contain TB bacteria the infection can take weeks or months to take hold and produce symptoms, and if it is left untreated it can be fatal.

TB is a common cause of death among people with HIV, because it is particularly dangerous for people with weakened immune systems – people with HIV are thought to be up to 27 times more likely to get the disease.

With treatment, TB can almost always be cured with antibiotics and people tend to stop being contagious after about three weeks of therapy.

TB is most common in less developed countries in sub-saharan and west Africa, southeast Asia, Russia, China and South America.