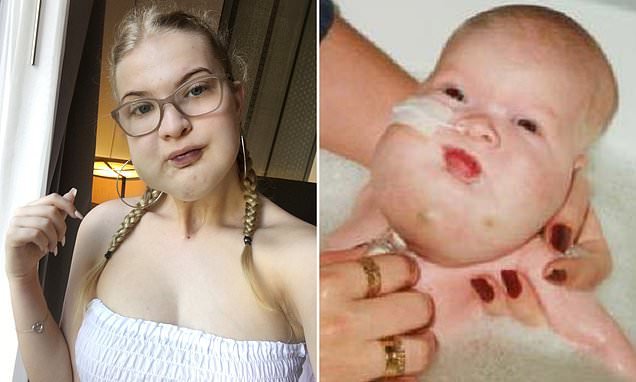 Teenager, 18, with a giant facial tumour reveals she was called a ‘blowfish’ by cruel bullies and strangers often assume she’s just had her wisdom teeth taken out

A teenager with a disfiguring facial tumour reveals bullies called her ‘blowfish’ and strangers assumed she had just had her wisdom teeth taken out.

Phoebe McIndoe, 18, from Perth, Western, Australia, was diagnosed with cystic hygroma – a collection of fluid-filled cysts – at birth.

Since then, Ms McIndoe has been in hospital with infections more than 100 times and had 16 treatments to reduce the size of the growth.

She was bullied and called ‘fatty’ and ‘blowfish’ growing up, and strangers have thought she was ‘stupid’ or ‘mentally challenged’.

But, working as a pharmacist, she said given the opportunity she would reject any ‘cure’ for her growth as it wouldn’t make her who she is today. 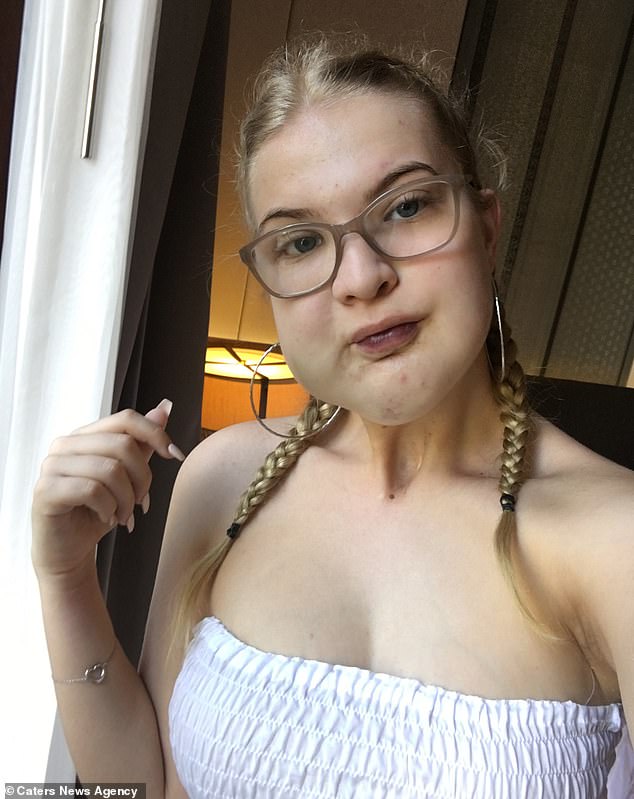 Phoebe McIndoe, 18, from Perth, Western, Australia, has been called a ‘blowfish’ and ‘fatty’ at school due to a disfiguring tumour on her face 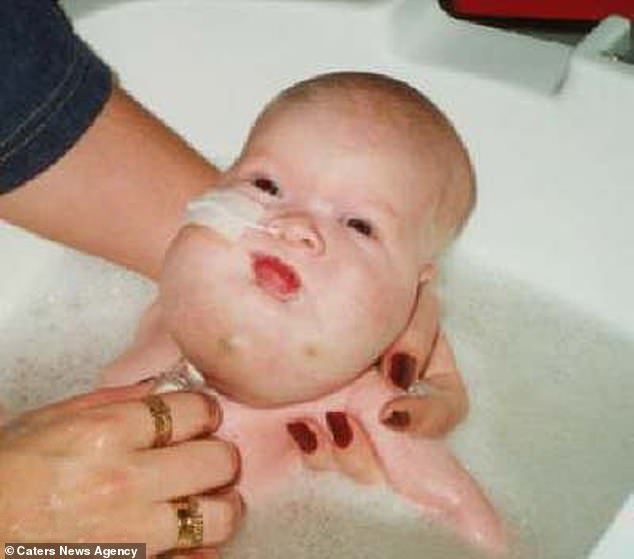 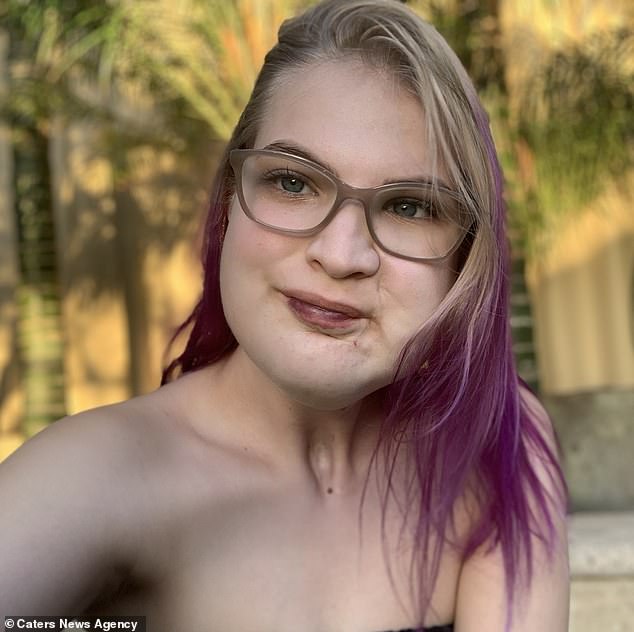 Ms McIndoe said: ‘I had a very large share of bullying and name calling, and comments that stem from people not knowing and instead stigmatizing.

‘Some people have asked if I had my wisdom teeth taken out, it’s crazy. I would rather people ask me than be left guessing and wondering.

‘The first couple of times people asked if I had my wisdom teeth out, I was flabbergasted. Sometimes it irks me still, so at times I say “I did” – you have to have fun with it sometimes.’

WHAT ARE CYSTIC HYGROMAS?

Cystic hygromas are a collection of fluid-filled cysts.

They affect up to one per cent of newborns in the UK. Their US prevalence is unknown.

Cystic hygromas most commonly form on the neck and armpits.

They occur when the lymph vessels fail to form correctly during the first few weeks of pregnancy.

Due to them occurring so early on in pregnancies, they cannot be prevented.

Cystic hygromas can be detected during pregnancy scans.

Most are visible during birth or early infancy and appear as painless, translucent, soft lumps.

Treatment is not always required but may involve surgical removal or injection sclerotherapy.

Cosmetic surgery may be performed in later life to reduce scarring.

A cystic hygroma is a collection fluid-filled sacs, known as cysts, that result from a malformation in the lymphatic system – a network of vessels within the body which form part of the immune system.

Lymph nodes are located in the neck, armpits and groin areas, and cystic hygromas are commonly found in the neck and armpits.

Doctors spotted a mass hanging down from Ms McIndoe’s neck when she was born, and she required a tracheostomy tube due to it restricting her breathing.

At six months, Ms McIndoe would have her trach tube removed and her cleft palette fixed, as well as corrective eye surgery at four – although it is not clear how the mass affected her eye.

Ms McIndoe said: ‘In primary school I was called everything from “fatty” to “blowfish” and many people thought I had a contagious disease which was horrible.

‘I grew-up not knowing why I was being excluded and why I had to be treated differently.

‘I’m not different to anyone else, there’s just a thing on the side of my face.’

In her early teens, at her worst points she was hospitalised once every few weeks to deal with blockages and infections, which cause the malformation to swell more.

Ms McIndoe said:  ‘My cystic hygroma is a whole bunch of blood vessels filled with lymphatic nerve fluid and tissue, which gets blocked up and swells up.

‘Sometimes it can reduce with massage but other times I need general antibiotics to lift the infection.

‘If there is a big blockage that’s harsh enough to block the fluid and get infected, it requires going into hospital for a drip in my arm with antibiotics.’ 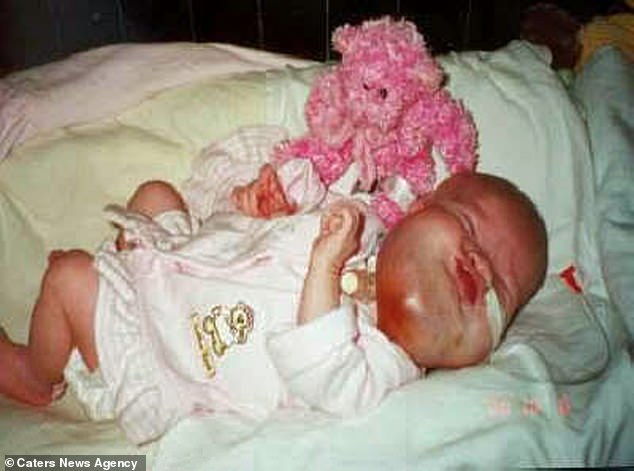 Hours old, surgeons recognised the mass on Ms McIndoe’s neck before diagnosing her. Pictured at five weeks old after having surgery with a tracheostomy tube to help her breathing 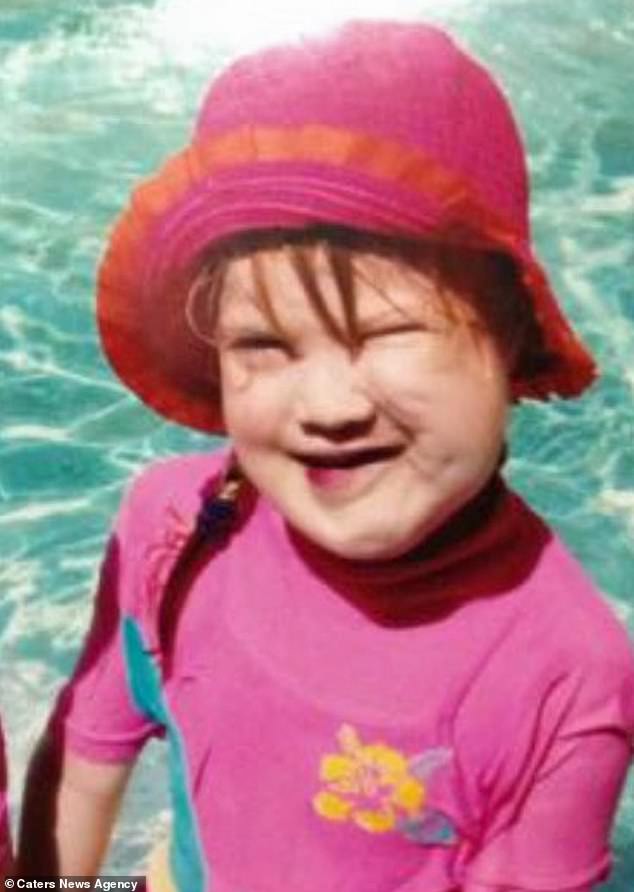 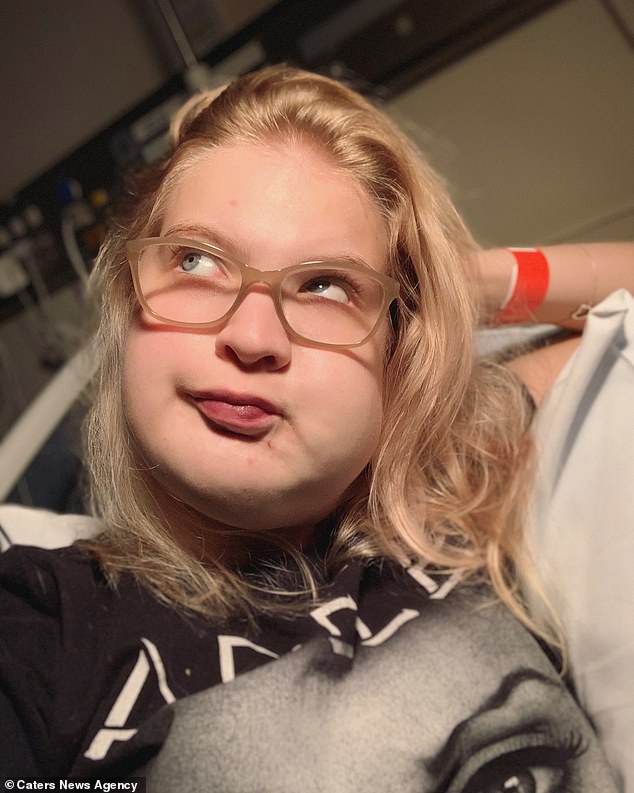 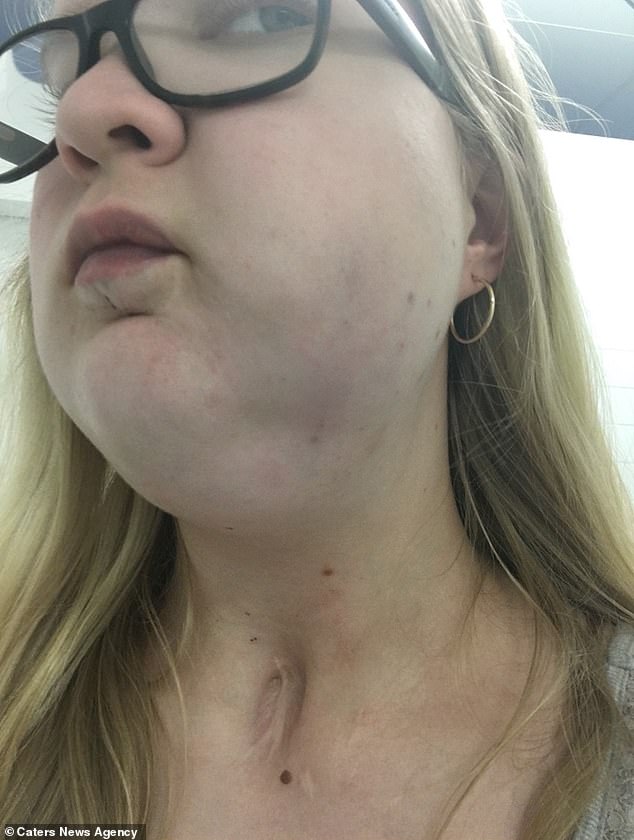 Ms McIndoe aged 16 after her last surgery to reduce the swelling and blockage. If a blockage gets infected, she needs to be in hospital with antibiotics through a drip

Although Ms McIndoe’s job requires ‘a lot of thinking, chemistry and maths’, she often feels like customers look down on her.

She said: ‘I know people make comments and even as an adult it’s very prevalent. At times people treat me like I’m mentally challenged or stupid.

‘My job is very intense and requires a lot of thinking, chemistry and maths, but customers think I’m just someone who sits out the back.

‘If someone came up and said, ‘I’ve never seen anyone like you, do you mind telling me about it?”, I would way prefer that.’

The outlook after surgery for cystic hygroma’s as a child is normally good. But depending on the size and location, the often come back.

Ms McIndoe said that if a ‘magic cure’ was offered to her, she wouldn’t take it.

She said: ‘The completely sensible answer would be yes, but part of me would say this is me and who I am. It would be like losing a part of myself and I wouldn’t want that. 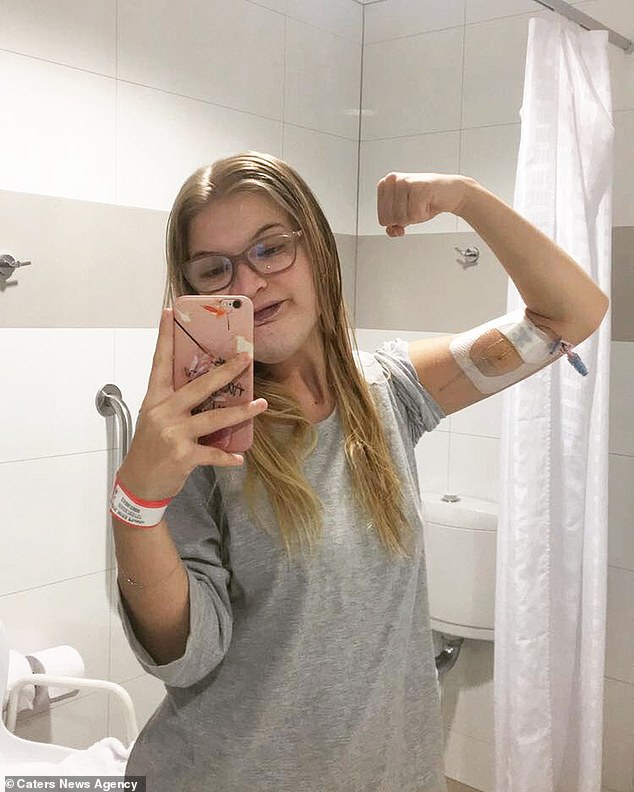 Ms McIndoe has been in hospital more than 100 times for infections – but if a ‘magic cure’ was offered to her, she wouldn’t take it 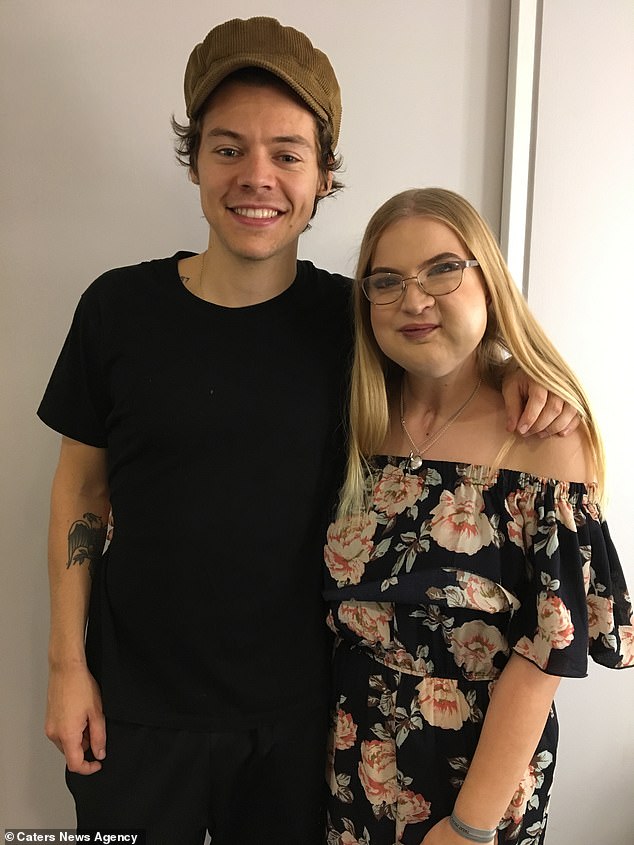 Ms McIndoe, pictured with Harry Styles, prefers to be asked about her disfigurement than be pre-judged so that she can help them understand her condition 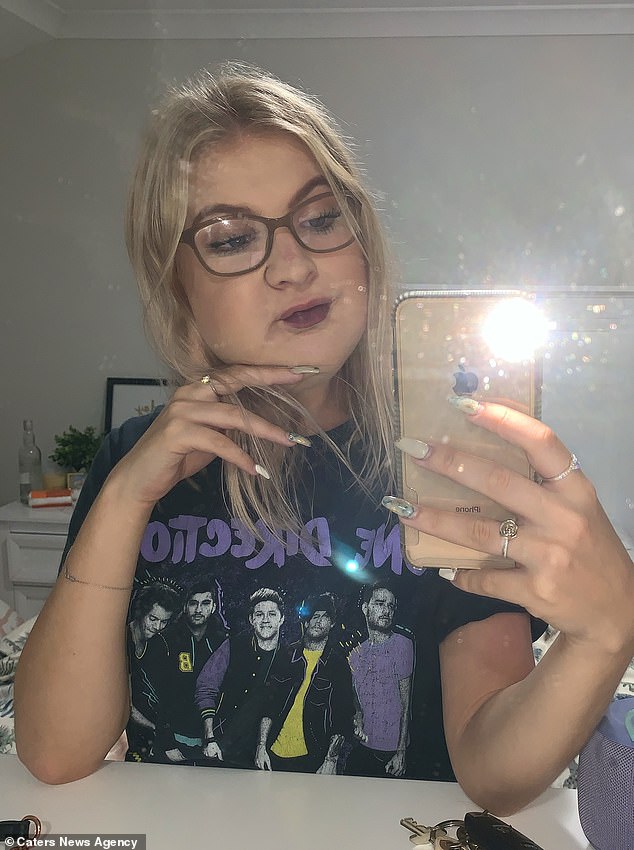 Ms McIndoe said: ‘I know I look different to other people, but I can walk, talk, feed myself and all of my brain functions are normal’

‘I one hundred percent love who it’s made me and I wouldn’t be who I am without it.

‘My life is amazing, and I am so happy and lucky with every opportunity that has been passed my way. It’s forever a part of me and I’m not ashamed of that.’

While Ms McIndoe has learned to accept her facial difference now, this wasn’t always the case.

She said: ‘When I was younger, I was all “woe is me” and hated it, I couldn’t understand why this was my world.

‘I was a big downer then, but I hit this point in life where I realised that I cannot change what has happened.

‘While it was hard to accept myself, it’s not something that can be changed, cut-off or thrown away. I will live with this for the rest of my life.’

Ms McIndoe hopes one day that people will ask her questions about her struggles rather than prejudging her.

She said: ‘I know I look different to other people, but I can walk, talk, feed myself and all of my brain functions are normal.

‘I normally tell people I was born with a type of facial malformation, which is a tumour that affects me physically but not mentally.

‘I don’t see the tumour when I look in the mirror – I was born with it so know no other life, I’ve never known any different, so I just see myself.’