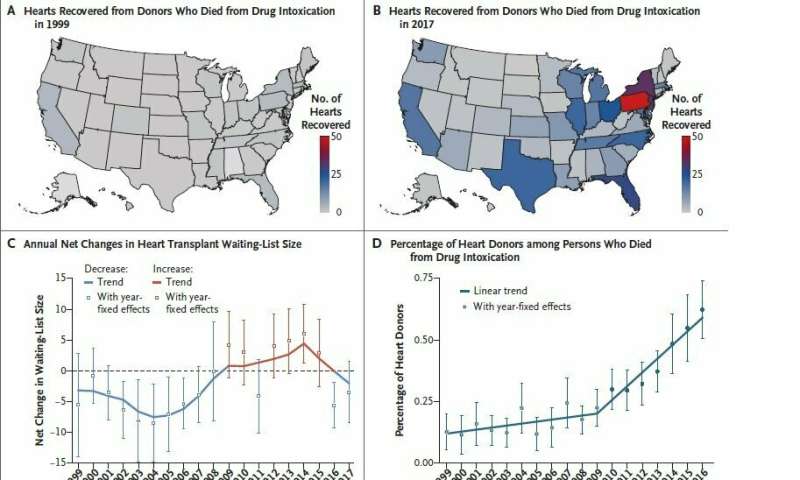 Transplantation and cardiology experts at Brigham and Women’s Hospital, in collaboration with colleagues at the London School of Economics, analyzed these patterns as well as state-wide variations in the number of donor organs recovered from drug-intoxication-related deaths. They found substantial variability from state to state and region to region. Their findings are detailed in The New England Journal of Medicine.

“In the U.S., the drug crisis is clearly not uniform, and neither is the rate of recovered hearts from drug-intoxication-related deaths,” said corresponding author Mandeep Mehra, MD, the medical director of the Brigham’s Heart and Vascular Center. “The fact that there’s heterogeneity between regions means there’s ample opportunity to learn from each other.”

The team analyzed data from the Organ Procurement and Transplantation Network to determine changes in the size of the transplant waitlist and data on drug-intoxication deaths from the Centers for Disease Control and Prevention WONDER online database. Bringing these datasets together allowed the team to calculate the proportion of recovered donor hearts from drug-intoxication-related deaths.

The team reported major increases in drug-intoxication-related deaths and organ recovery in the Northeast, Midwest and Southwest. Overall, the team estimated that 6.24 hearts are recovered from every 1,000 lives lost due to drug intoxication.

“Since one donor may provide a variety of organs to multiple recipients, the total number of people on waitlists who can receive a life prolonging transplant may be substantially higher,” said Mehra.