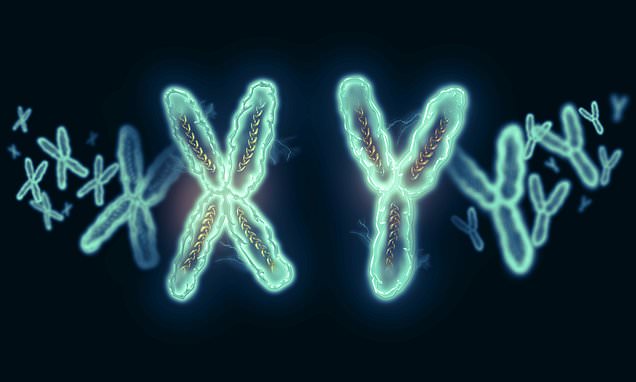 How fading Y-chromosome can put older men at risk: Scientists have shown for the first time that the loss can harm the heart

Age-related loss of the Y-chromosome — the part of human DNA that is unique to males — raises men’s risk of potentially life-threatening heart problems as they get older, new research suggests.

The discovery, detailed in the journal Science, paves the way for a simple test to identify men whose Y-chromosome count puts them at higher risk of conditions such as heart failure, in which an ailing heart struggles to pump blood around the body.

Humans have two sex chromosomes, X and Y. Males typically have one of each, while women have two X-chromosomes.

Scientists have known for decades that some men start to lose Y-chromosomes from their cells as they get older. 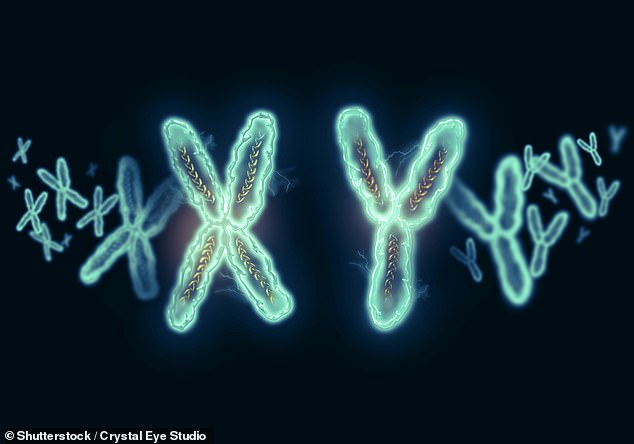 Age-related loss of the Y-chromosome — the part of human DNA that is unique to males — raises men’s risk of potentially life-threatening heart problems as they get older, new research suggests

For example, a previous study of thousands of men in the UK found the chromosome to be absent in about a fifth of those aged 40 to 70 years old. This phenomenon, known as Y-loss, has been linked to a range of health conditions including cancer, cardiovascular disease and Alzheimer’s disease, as well as a shorter lifespan.

However, scientists were unable to determine whether loss of the Y-chromosome was directly causing disease or whether, like wrinkles or greying hair, it was simply a sign of ageing.

Migraine medicines can curb appetite and ward off obesity.

U.S. scientists found obese mice ate less and lost weight when given a daily dose of triptans, a treatment for migraine.

Those given frovatriptan lost 3.6 per cent of their weight, on average, in less than a month, which the researchers from UT Southwestern Medical Centre say was ‘impressive’.

They suspect triptans target the serotonin 1B receptor, a protein thought to play a role in appetite.

Now, for the first time, scientists have shown that Y-chromosome loss can harm the heart. (Women experience a loss of their sex chromosomes, too, but this has not been associated with shorter lifespan and disease.)

The scientists, from the University of Virginia in the U.S. and Uppsala University in Sweden, first proved the link in mice.

The mice low in Y-chromosomes also developed more fibrosis — or thickening — of their heart muscles. This thickening stiffens the heart and makes it harder for it to pump blood.

The researchers then moved on to people and looked at medical and genetic information on more than 223,000 men who gave blood samples to the UK Biobank, a large health database.

TheY found that men who had lost the Y-chromosomes from more than 40 per cent of their white blood cells were 31 per cent more likely to die from cardiac conditions, including heart failure, over the following 12 years than those who didn’t have Y-loss.

The researchers concluded that, together, these results indicate that Y-loss contributes to fibrosis of the heart muscle, cardiac dysfunction and mortality in men.

They speculate that the loss of the Y-chromosome affects how some cells in the heart work, causing fibrosis and heart disease.

Professor Kenneth Walsh, who led the study, told Good Health: ‘As we age, one of the things that happens is that we develop fibrosis in various tissues and organs, including the heart, kidneys and lungs. And that process is accelerated by loss of the Y-chromosome.’

Rate of Y-chromosome loss varies, however. ‘Some men lose it very fast — they are super-losers — but others don’t, and we don’t yet understand why that is,’ says Professor Walsh.

In future, testing for Y-chromosome loss could lead to the ‘super-losers’ being identified.

‘If you happen to be one of those men who are losing a lot of their Y-chromosomes, then that might be an indication to see a specialist who could do a cardiac MRI scan to measure the extent of fibrosis,’ says Professor Walsh.

Although there is currently no treatment for cardiac fibrosis, scientists are working on new drugs to reverse the damage.

Professor John Perry, a geneticist at the University of Cambridge who has studied Y-loss, said the findings were interesting but urged men not to worry, saying: ‘It is a very modest risk factor for heart disease compared with other factors that are more significant, such as blood pressure, weight and ‘bad’ LDL cholesterol.

‘These other factors are modifiable, while you can’t really do anything about Y-loss,’ he says.

‘The only thing that there’s slight evidence for is that if you smoke and you stop smoking, rates of Y-loss can go down a bit.’

‘The ultimate hope here is that we can tackle Y-loss, that we can neutralise the effects of Y-loss and have healthy hearts as a result,’ adds Dr Mikhail Spivakov, a geneticist at Imperial College London.