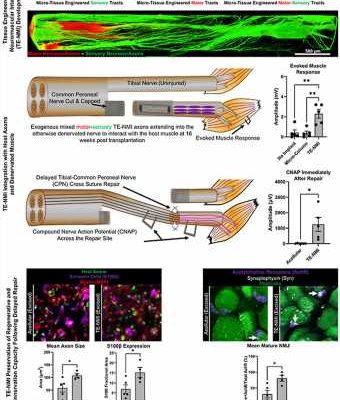 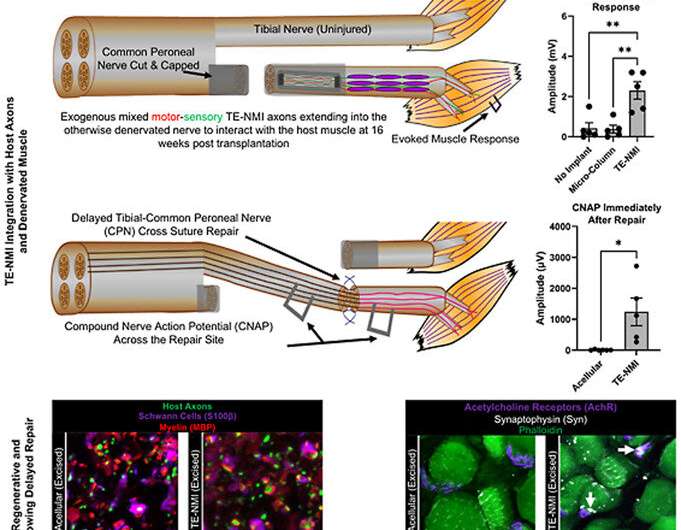 Researchers engineered the first injectable microtissue containing motor and sensory neurons encased in protective tissue, called tissue engineered neuromuscular interfaces (TE-NMIs). The TE-NMI neurons provide a source of axons to muscles in rats who suffered nerve injuries, and “babysit” the muscles to prevent degeneration and loss of function, while the damaged nerve regrows, according to researchers at the Perelman School of Medicine at the University of Pennsylvania. Their findings were published in Bioactive Materials.

The TE-NMIs are comprised of nerve cells encapsulated in a protective hydrogel, and the entire microenvironment is injected in close proximity to muscles. This “ship in a bottle” method protects the neurons and increases the likelihood that a greater quantity of axons will connect with the muscle and maintain regenerative pathways.

Researchers severed the sciatic nerve in rats, and injected them with either a TE-NMI or a microtissue without any neurons. In the group that received TE-NMIs, researchers were able to electrically stimulate the nerve stump being “babysat” by the TE-NMI and record a muscle response up to five months after the tissue was implanted. No muscle response was detected in the control group.

“There are hundreds of thousands of patients who undergo surgery to repair nerve injuries every year, and even if a surgeon performs a perfect procedure, they can’t make axons regrow faster than about one inch per month. For nerve injuries in the upper arm or upper leg, regeneration could take years; however, the pathway leading to the muscle and the muscle itself will irreparably degenerate after six to 12 months without connections from axons, resulting in permanent loss of motor and sensory function,” said senior author D. Kacy Cullen, Ph.D., an associate professor of Neurosurgery. “By increasing the time window for a patient’s axons to reconnect to muscle, this research has potential to improve the extent of recovery for patients without causing further damage.”

For example, patients who suffer from a brachial plexus injury—a nerve root avulsion where nerves are pulled away from the spinal cord—may regain elbow function, but will likely never regain function of their hand. In these cases, a neurosurgeon would typically split a healthy nerve near the hand, and reroute it to stimulate the hand muscles to restore partial function while the nerve regrows. TE-NMIs would potentially do a more thorough job, without having to damage a patient’s healthy nerve, researchers suggest.