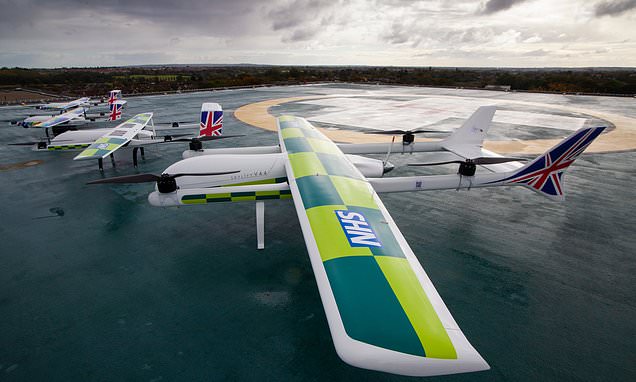 NHS England will trial drone deliveries of cancer drugs in a bid to slash waiting times for the vital medication.

Chemotherapy drugs will be flown from Portsmouth to a hospital on the Isle of Wight in 30 minutes, down from the four hours it normally takes by conventional transport.

Patients on the island will then be able to pick them up from their local hospital or pharmacy, rather than having to travel to the mainland for prescriptions.

It is hoped that drone technology will one day enable doctors to make ‘same-day delivery’ orders for drugs and medical equipment in other parts of the country.

Amanda Pritchard, chief executive of NHS England, announced the pilot as the health service marked its 74th birthday on July 5.

She said moving to drone technology would also be good for the environment, by cutting carbon emissions from cars, ferries and planes.

Health officials said they chose chemotherapy because the drugs have a short shelf life and are difficult to transport. 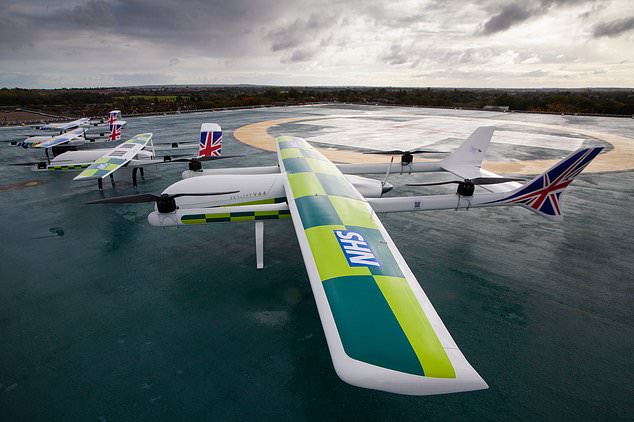 Sajid Javid claimed he wanted to see the country become a ‘world leader in cancer care’.

The Health Secretary added: ‘Using the latest technology to deliver chemo by drone means patients will have quicker, fairer access to treatment no matter where they live.

‘As the NHS turns 74, innovations like this will help improve patients’ access to lifesaving care while ensuring the NHS is making the best use of the record funding we’re investing to bust the Covid backlogs.’

It is hoped the trial will offer a better option for cancer patients living on the Isle of Wight, many of whom have to travel to the mainland for treatment.

The drone programme will be trialled first on the island followed by Northumbria.

Announcing the pilot, Ms Pritchard said: ‘Delivering chemo by drone is another extraordinary development for cancer patients and shows how the NHS will stop at nothing to ensure people get the treatment they need as promptly as possible – while also cutting costs and carbon emissions.

‘As the NHS turns 74 it is clear that the pace of change and improvement across the health service is only accelerating, as our fantastic staff seek to make the most of life-changing advances to improve patients’ lives as we promised in the NHS Long Term Plan.’

The Isle of Wight was also the first place to trial the NHS Covid contact tracing app in summer 2020, before it was rolled out nationally.

The new drone trial is being launched in partnership with London-based tech company Apian.

Darren Cattell, chief executive of the Isle of Wight NHS Trust, said: ‘The island has a long history of innovation.

‘We are excited to continue that tradition by utilising the latest technology to overcome the challenges we face and to provide the very best service to our patients.

‘We are still at a relatively early stage but the use of drones to transport medical supplies is a concept that has radical and positive implications for both the NHS and for patients across the UK as well as the Isle of Wight. It is great to be part of this innovative project.’

More than £100million was spent on prescribing common drugs like paracetamol last year, despite them being available for pennies on the high street.

Official data also shows the NHS in England spent thousands on illicit substances like cocaine for use as an anaesthetic.

It comes just a day after Health Secretary Sajid Javid promised that ‘every pound’ in the NHS will be ‘well spent’ going forward.

In total the NHS spent £9.69billion on prescription drugs in England for the 2021/22 financial year.

That’s despite the health service banning GPs and other prescribers from dishing out medications which patients themselves can buy cheaply in shops since 2018.

Think-tanks today said taxpayers will be dismayed by the NHS’s ‘wasteful’ spend on ‘pointless prescriptions’ in light of the recent national insurance tax hike.

Paracetamol made up £73.7million of the spend, being prescribed over 16million times, at about £4.50 a pack — roughly 15 times the price of a pack of paracetamol at supermarket Tesco.