The NHS is to fast-track the introduction of ‘game changing’ new cancer drugs that target tumours according to their genetic make-up.

Tumour agnostic drugs can treat a wide range of cancers regardless of where they originate, such as the breast or lungs.

They work by blocking an enzyme which helps the tumour to grow. In trials, 75 per cent of tumours responded.

Children are expected to benefit the most, as well as those with rare cancers who don’t have many treatment options.

Two drugs are hoped to be licensed for use in England this year, but will need to be approved by NICE first. 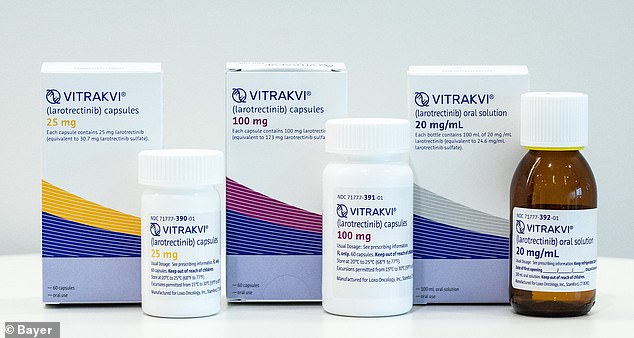 The NHS is preparing to fast-track the introduction of ‘game changing’ new cancer drugs, such as larotrectinib, that target tumours according to their genetic make-up

Simon Stevens, chief executive of NHS England, said preparations are under way to ensure patients benefit as soon as possible.

However, he warned that manufacturers will need to offer the treatment at fair prices for it to be made available on the NHS.

Mr Stevens is expected to make the announcement in a speech to health leaders at the Confed 19 in Manchester tomorrow.

He is set to say: ‘This exciting new breakthrough in cancer treatment is the latest example of how the NHS can lead the way in the new era of personalised cancer care.

‘The benefits for patients, in particular children, of being able to treat many different types of cancers with one drug is potentially huge.’

Mr Stevens, who has been at the helm of NHS England since 2014, is expected to add that it will help them ‘lead longer, healthier lives’.

The announcement follows the introduction of CAR-T therapy in September last year, which was also fast-tracked.

NHS England was among the first to offer CAR-T, which involves programming a patient’s immune system cells to target their cancer.

‘NHS patients in England were at the forefront of the CAR-T revolution,’ Mr Stevens is expected to add.

‘And I want to make sure that they are also among the first in the world to benefit from these treatments.

‘Preparations are under way to make sure the NHS can adopt these next generation of treatments.

WHAT ARE TUMOUR AGNOSTIC DRUGS?

Research has expanded here in recent years due to developments in genomic sequencing technologies.

A tumour agnostic drug can treat any type of cancer, regardless of its origins in the body or the tissue.

Most cancer treatments are developed to treat a cancer that has developed in a specific organ or tissue, like breast cancer or lung cancer.

But tumour agnostic drugs treats any kind of cancer as long as the cancer has the specific molecular alteration targeted by the drug.

Findings out the molecular features  of a tumour can help doctors decide which treatments may be best for an individual with cancer, regardless of where the cancer is located or how it looks under the microscope.

These drugs show promise in clinical trials, with tumours responding in two-thirds to three-quarters of the cancers tested, according to NHS England.

Targetted therapies already exist, such as Pembrolizumab (Keytruda). But these don’t have the potential to treat a wide range of cancers like tumour agnostic drugs do.

It gives hope to patients with rare or difficult to treat cancers.

‘But manufacturers need to set fair and affordable prices so treatments can be made available to those who need them.’

The drugs can treat tumours which have a genetic variation known as neurotropic tyrosine receptor kinase, or NTRK, which accelerates growth.

It is most commonly found in rare cancers affecting children and adults, such as salivary tumours and secretory breast cancer.

The drugs work by blocking the NTRK enzyme in tumours which have tested positive for the genetic variation, causing them to shrink.

In early trials, tumours responded in two-thirds to three-quarters of the cancers tested.

Around 850 patients a year could benefit from the front-runners while many thousands a year are eventually expected to benefit in the future.

Larotrectinib, produced by pharmaceutical company Bayer, and entrectinib, made by Roche, are expected to be the first drugs of this type licensed by the EU later this year.

Patients will need to have testing to identify if they would benefit from the drugs, which the NHS expect will become routine.

Ian Walker, director of clinical research at Cancer Research UK, said: ‘The concept of focusing on specific mutations that drive a person’s disease, versus the cancer type, is a fascinating one.

‘Whilst this approach may not work in all cases, where the weight of clinical evidence supports the approach, this could open up opportunities for cancer treatment that we wouldn’t have had 20 years ago.

‘It’s essential that patients are offered routine genetic analysis of their tumours, no matter where they live, to match them to appropriate treatments, such as these drugs.

‘If approved by the National Institute for Health and Care Excellence (NICE), tumour agnostic drugs could give hope to children and young people with cancer, patients with rare cancer types, and their families.’

NICE said it has already started appraisals for the two drugs as part of wider aims to publish guidance for any cancer drug as close as possible to it receiving its marketing authorisation – the licence which shows the drug is safe for use.