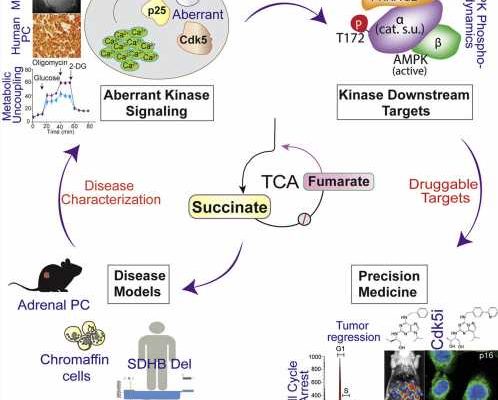 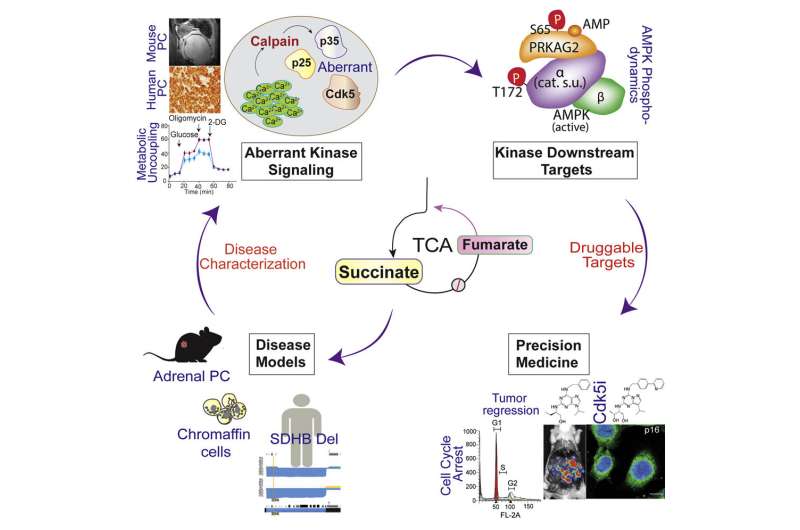 Researchers have deciphered a signaling cascade through which inborn errors in metabolism provoke deadly neuroendocrine tumors in the adrenal glands. This discovery explains how impaired metabolism due to mutations in a key enzyme called succinate dehydrogenase B disables a normal bioenergetic sensing mechanism, triggering cells to divide uncontrollably.

This explanation of how cancer cells divide despite having a less efficient energy production opens new possibilities to treat this and other forms of cancer. The phenomenon of cancer cells’ dividing uncontrollably—while almost inexplicably shifting to an impaired metabolic state—was dubbed the Warburg effect, in honor of Otto Warburg, Ph.D., M.D., who first described it almost 100 years ago and won the Nobel Prize in physiology or medicine in 1931. Further aspects of the phenomenon relating to hypoxia have been famously described in the 2019 Nobel Prize in physiology or medicine awarded to William Kaelin Jr., M.D., and colleagues.

Now, a new study, published in the journal Cell Reports and led by University of Alabama at Birmingham researchers, shows how succinate, one of the unused metabolites of the faulty energy production, triggers a second chain of protein-to-protein interactions that turns off a key mechanism that coordinates energy sensing during a cell’s resting state. As a result, the cells escape from their normal state and invoke an aberrant cell cycle activity, a characteristic of cancer cells.

“This paper represents a major advance in our understanding of this recalcitrant form of cancer,” Bibb said. “It also advances our understanding of how alterations in metabolism drive cancer and hopefully will allow us to bring forward more effective treatments.” Bibb is a professor in the UAB Department of Surgery, and Gupta is a research scientist in the O’Neal Comprehensive Cancer Center at UAB.

The steps of how succinate triggers a cascade of protein-to-protein interactions that turns off a key energy-sensing mechanism and causes cancer are detailed in this multi-institution study. The researchers used modern cell biology to show how succinate buildup leads to loss of control of calcium and the activation of proteases, followed by alternations in the activity of a series of protein kinases that mediate intracellular signaling networks. At the center of this cancer-causing process, a protein known as AMP kinase is inactivated, so it can no longer sense low energy levels and pass this information on to processes that block cell proliferation. The result is a default release from cell cycle checkpoints, leading to uncontrolled cell proliferation.