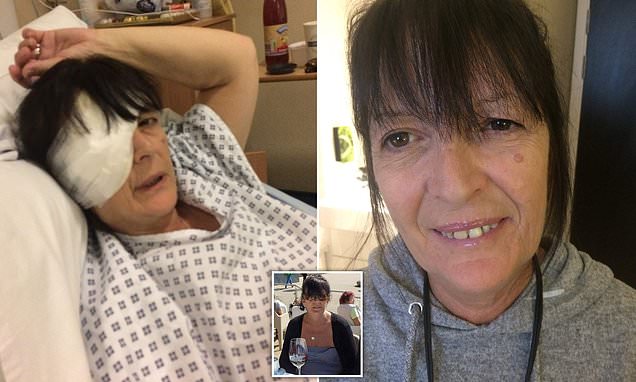 Sun worshipper, 59, who lost her eye to skin cancer warns against fake designer sunglasses which offer no UV protection

For years, Chris Wilcocks loved to soak up the sun on Turkish and Spanish beaches flaunting her ‘blingy’ fake designer shades.

But now the 59-year-old, from Essex, is furious with herself for being foolish after she lost her eye to skin cancer caused by UV rays.

And she has pinned the blame on her 40-strong collection of knock-off sunglasses, which were once her pride and joy but now just make her shudder with fright.

Ms Wilcocks, from Basildon, said: ‘When they told me it was sun damage that caused the cancer I was utterly devastated. 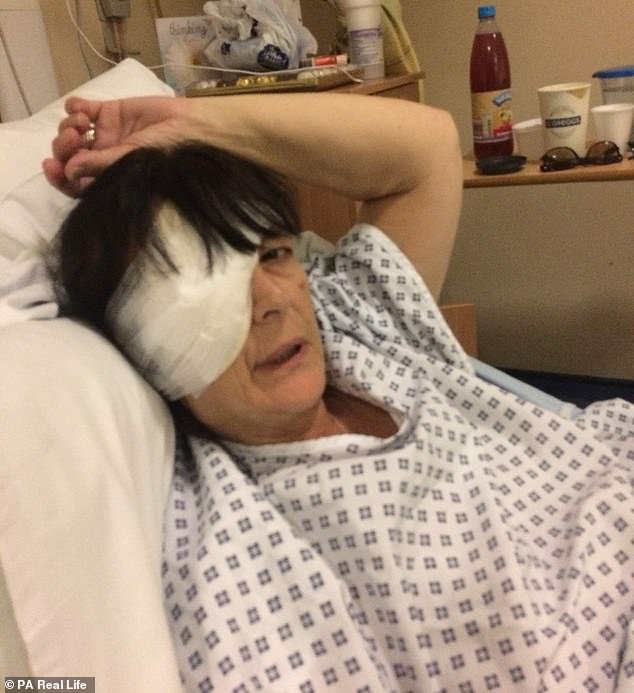 Chris Wilcocks, 59, from Basildon, Essex, lost her eye to ocular melanoma after spending years soaking up the sun with fake shades 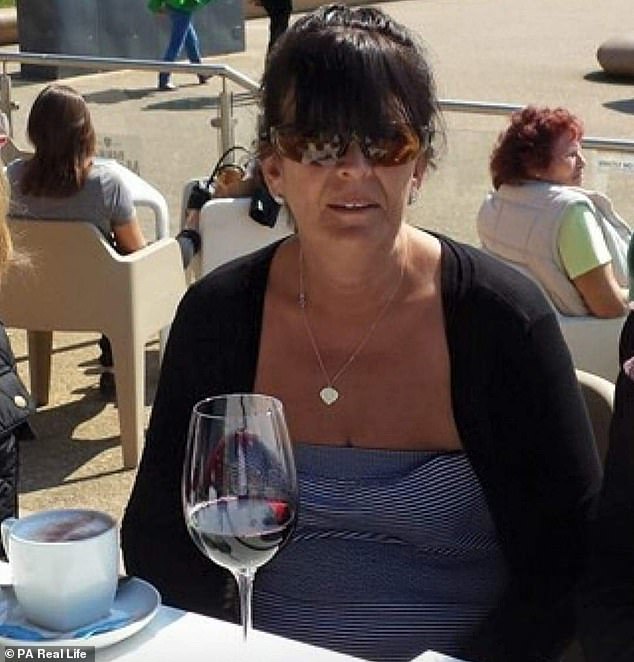 The mother-of-two once boasted a 40-strong collection of knock-off sunglasses, which were once her pride and joy but now just make her shudder with fright.

‘I always went for the blingiest sunglasses – I just loved the glamour, unfortunately, and they had clearly done nothing to protect my eyes.’

The mother-of-two would wear the cheap shades throughout the year and on holidays with her 61-year-old builder husband Graham.

As well as wearing the shades on foreign beaches with the sun beating down, Ms Wilcocks had also shirked eye tests for years.

This damaging combination climaxed on one morning in August 2018, when the mother was suddenly robbed of her sight.

The former home care manager said: ‘I’d woken up bright and early and went into work to make the most of it.

‘I was walking briskly along a corridor when, suddenly, it was like all the lights had gone out. 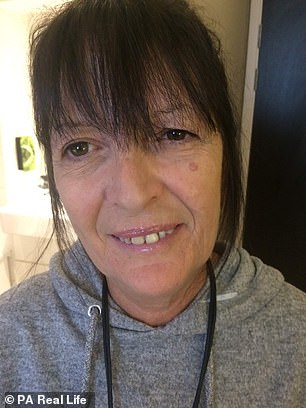 She had an operation to have a new custom lens fitted

‘”I’ve gone blind, I’ve gone blind!” I cried, as my colleagues sat me down. I was so panicked I could hardly think, and the next thing I knew I was in an ambulance.’

She said: ‘The doctor looked at the back of my eye and almost immediately told me that it needed to be removed instantly.

‘I was told the tumour was too large for any other possible treatment.’

Despite everything, Ms Wilcocks tried to put on a brave face for her husband and sons Lee, 36, a joiner, and Luke 30, a landscaper.

She said: ‘It was just so upsetting. I tried to stay strong for the family, though. That’s what mums do. My tears were kept behind closed doors but they were there.’

Ms Wilcocks was booked in for an hour operation to remove her eye at The Royal Liverpool University Hospital on September 2, 2018. 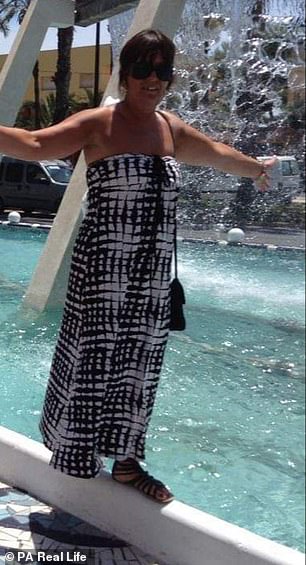 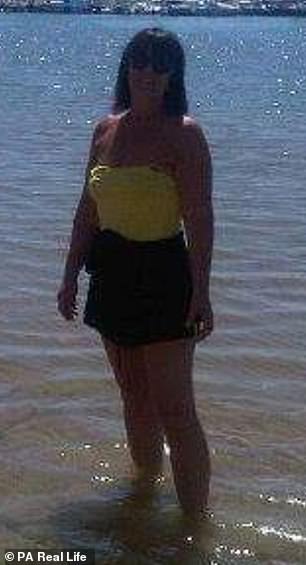 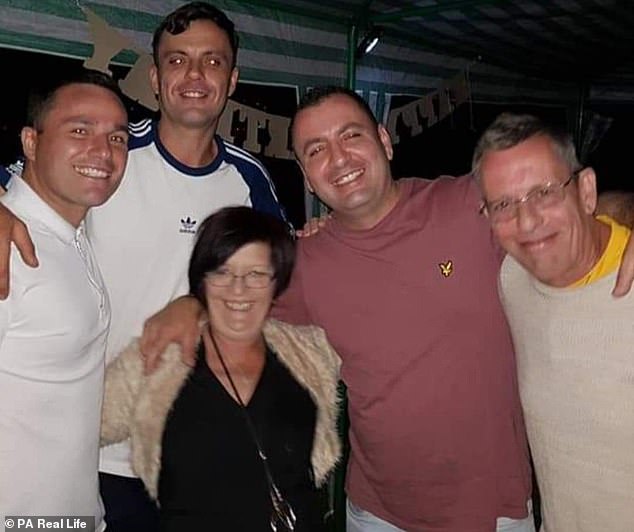 Ms Wilcocks tried to stay strong to protect her husband Graham, 61, (right) and her sons Lee, 36, a joiner, and Luke 30, a landscaper

She said: ‘Moments before the operation, it really hit me that I was going to lose my eye for good.’

She said: ‘Part of it was self-consciousness, but part of me just felt silly. Silly that I’d worn those cheap sunglasses for all those years, over all those summers.

‘I must have had at least 40 pairs and I’d barter the shopkeepers down from 10 euros to about six or seven for a pair.’

She wore an eye-patch for two weeks before returning to the hospital to have a prosthetic eye fitted.

As she began to adjust to her new eye, Ms Willocks was dealt another devastating blow in April this year.

CT and PET scans at north London’s Mount Vernon Hospital – carried out to check on her progress – revealed that the cancer had spread to her liver.

She said: ‘The day I was told the cancer had spread wasn’t a very good day at all… it was hard.

And in May 2019 she began a year-long course of immunotherapy. This involves visiting Southend Hospital once a fortnight for a five hour session, during which special drugs are administered through an IV drip.

WHAT IS OCULAR MELANOMA?

Ocular melanoma (OM) is a cancer of the eye that approximately 750 Britons and 2,500 Americans are diagnosed with annually.

Although it can occur in people of all races, it is most common in those with light-pigmented skin and blue eyes. The median age of diagnosis is 55.

It develops slowly from pigmented cells of the choroid, in the iris or ciliary body and is often referred to as a ‘silent killer’. These areas make up the uveal and the disease is sometime referred to as uveal melanoma.

Usually 10-15 years after diagnosis, in half the cases, the malignant tumor can spread through the body via metastasis resulting in the death of the diagnosed person.

It is especially when it reaches the liver but in some patients the process can be delayed by 20-25 years.

Unlike cutaneous melanoma of the skin, OM is not believed to be related to sun exposure.

Ms Wilcocks added: ‘The side effects can be tough. I’m tired all the time. I’ve had to take time off work because I’m so fatigued. But I’m hopeful for the future – I have to be.’

Doctors told her they are hopeful that at the end of her treatment her cancer will go into remission.

But, in the meantime, she is keen to raise awareness about the dangers of wearing cheap sunglasses and the need to have regular eye tests.

She said: ‘It frightens me how many people out there are wearing these sunglasses with next to no sun protection.

‘I just want to shout at them and tell them my story. I spent years using reading glasses off the shelf which is why I didn’t go to the opticians for so long.

‘I just wish I’d have known they weren’t an alternative to going and seeing a professional and getting my eyes tested properly.

‘I wish the packaging on those things made it clear you need to go to the opticians regularly.

‘Really, I’d like to ban cheap sunglasses without UV protection altogether but, for now, I’ve got to focus on raising awareness.’

Ms Willocks added: ‘It’s like smoking used to be – people need to know the facts. And, at least, if you’re going to buy cheap glasses then make sure you go for an eye test. They cost next to nothing.

‘I was always being told by friends and family to go and I completely ignored them.

‘Doctors said if it wasn’t for my blood vessels bursting I could have sat there for months and months as the cancer grew and grew.

‘In a way, going blind saved my life. I dread to think what might have happened if I hadn’t.’