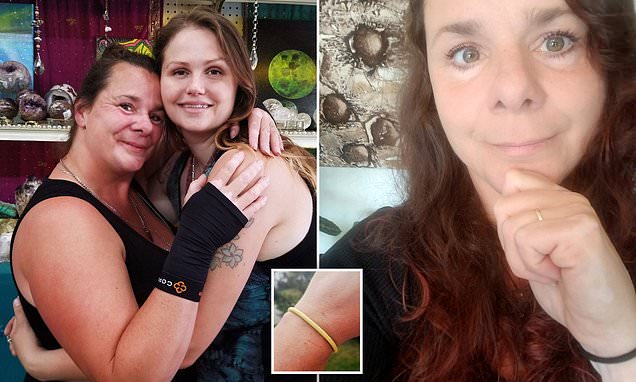 Mother, 47, claims wearing hair bobbles on her wrist for 30 years has given her carpal tunnel syndrome

A mother-of-four claims wearing an elastic hair band on her wrist has given her permanent nerve damage.

Lisa McLennan, 47, was diagnosed with carpal tunnel syndrome earlier this year and believes her habit of wearing scrunchies on her arm made it worse.

The common condition is caused by the compression of a nerve in the wrist which can cause pain, tingling and potentially weakness in the arms and hands.

Mrs McLennan became convinced wearing a tight piece of elastic on her arm had triggered the condition when a shopkeeper said her own doctor told her not to do it.

There are no suggestions from health officials that wearing tight elastic or clothing on the wrist could lead to carpal tunnel syndrome. 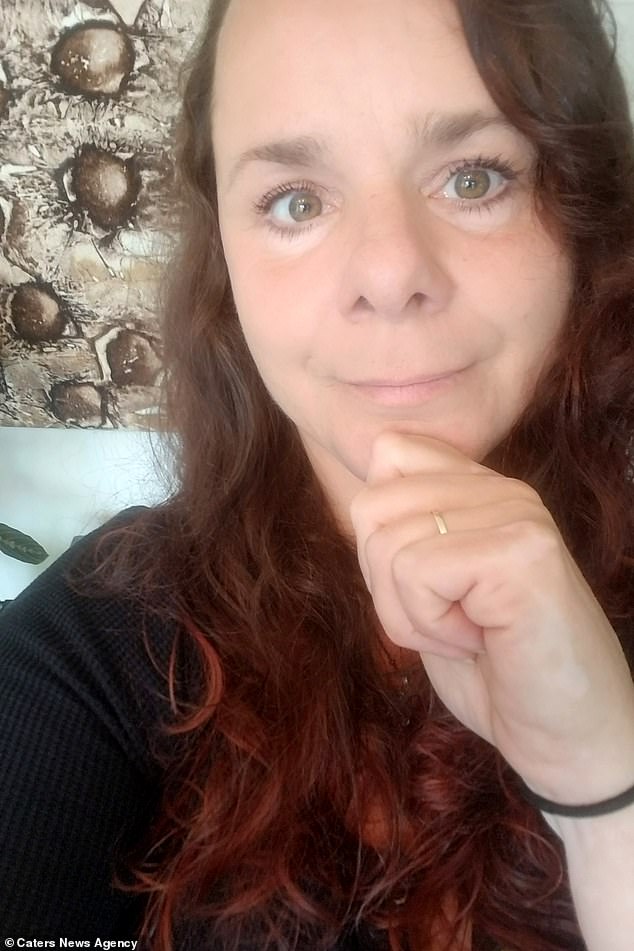 Lisa McLennan, from British Columbia in Canada, said wearing scrunchies on her wrist for years has contributed to her carpal tunnel syndrome, which is worst in her left arm

‘I injured the tendon in my thumb and [the doctor] checked me for carpal tunnel syndrome,’ Mrs McLennan, from British Columbia in Canada, said.

‘I was in the shop a few days later telling the woman who worked there how my left wrist was more severe than my right and she pointed to my elastic and said “stop doing that then”.

‘She explained that a neurologist had told her not to do it because it can cause issues.’

Mrs McLennan said she had worn the hair bands round her wrist since she was a teenager, meaning they had put pressure on her arm for three decades.

And when she developed a pain in her wrist she first thought it was arthritis, which she suffers with elsewhere.

But a visit to the doctor revealed it was instead caused by carpal tunnel, which most often affects middle-aged women. 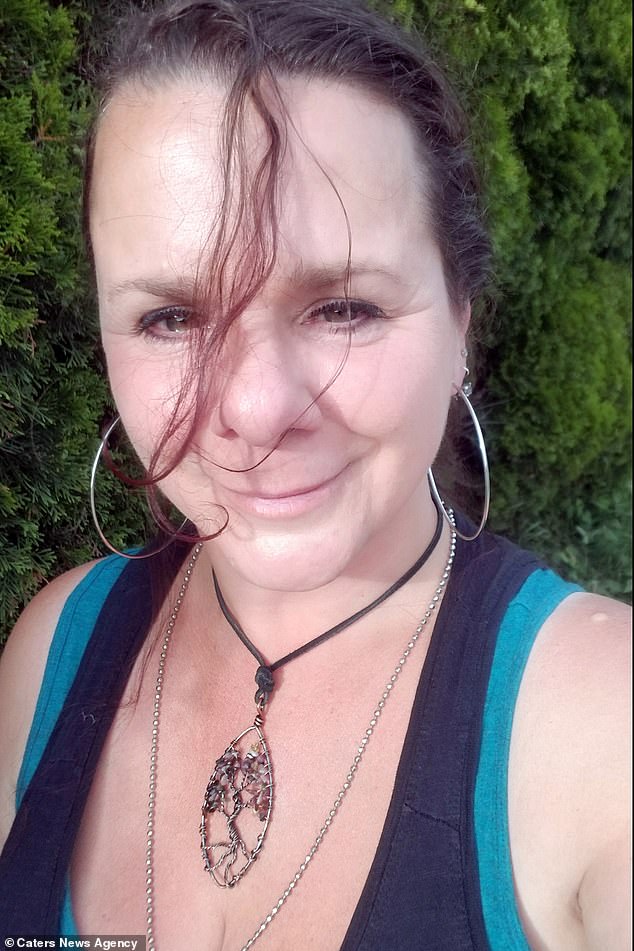 Mrs McLennan first thought the pain in her wrist was arthritis, which she has in her neck, but a doctor diagnosed her with carpal tunnel syndrome earlier this year

It’s triggered by pressure on the median nerve, which runs down the middle of the arm, through the inside of the wrist and into the fingers.

People who are overweight, pregnant, have arthritis or diabetes, have injured their wrist or have to hold vibrating tools or bend their wrists a lot for work at at more risk, according to the NHS.

Despite Mrs McLennan admitting to meeting several of these criteria she remains convinced the hair bands have exacerbated the pain and numbness in her arm.

She said: ‘The pain goes away because there is so much damage done to my nerves.

‘I’m overweight now but I wasn’t when I was younger – I was quite skinny so the elastic fitted more loosely.

‘Don’t do it, just don’t whether it causes issues right now or not. It’s an easy fix; an easy, pro-active way to save yourself pain later.’ 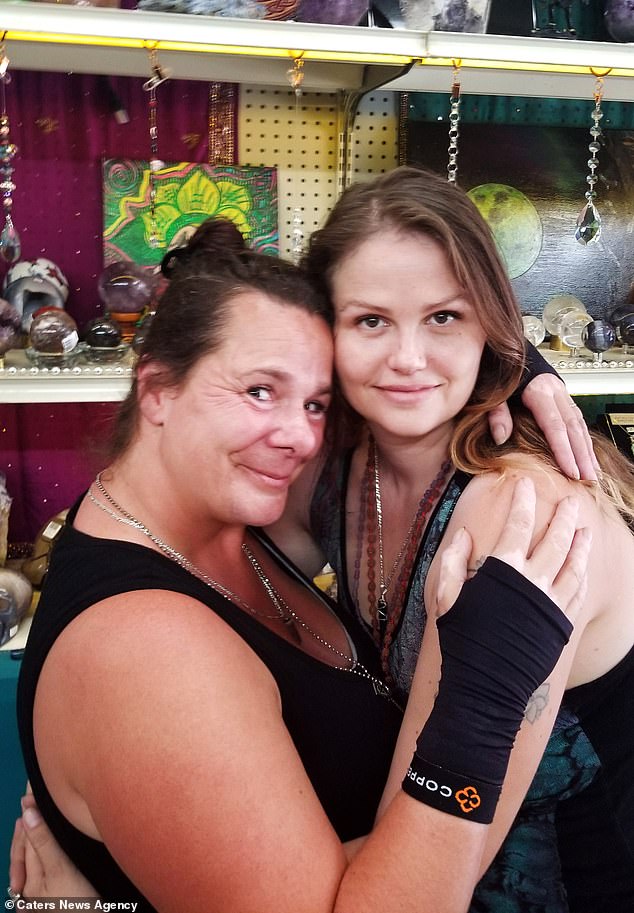 Mrs McLennan hadn’t considered that the pieces of elastic were what was causing the carpal tunnel until a shopkeeper she knows, Helen (pictured), said her own neurologist had told her there was a link 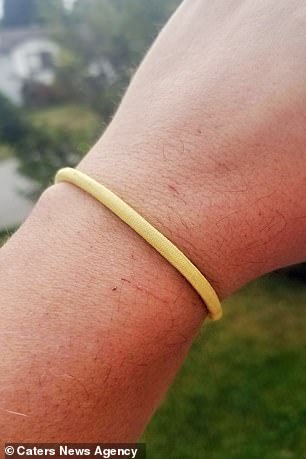 The NHS and Institutes of Health in the US don’t list external pressure on the wrist as a risk factor for carpal tunnel syndrome.

Pressure on the nerve is usually internal and caused by swelling or problems with the muscle, they say.

But wearing something tight on the wrist for a long time could, in theory, cause inflammation by having a tourniquet effect.

Mrs McLennan said she has since quit using scrunchies altogether in a bid to stop herself wrapping the elastic round her hands.

The stay-at-home mother added: ‘It was just a habit, it was always on my wrist whenever it wasn’t in my hair.

‘I’m so aware now that I shouldn’t be doing it but I’ll be cleaning the house, find an elastic and put it on my wrist. Then I think “oh no what am I doing?”

‘I have taken to using a hair claw instead so I don’t put the elastic on my wrist.’

WHAT IS CARPAL TUNNEL SYNDROME?

Carpal tunnel syndrome is a common condition which is caused by pressure on a nerve in the wrist, usually imposed by internal swelling.

People with carpal tunnel include pain, tingling or numbness in the fingers, hands or arms, and potential weakness in the thumb or difficulty gripping things.

The symptoms usually start slowly and aren’t uncomfortable all the time, tending instead to come and go.

Although the condition can affect people of any age, it’s more common among women and people in middle or old age.

Things which may increase someone’s risk of developing carpal tunnel include being overweight, having arthritis or diabetes, a family history of the condition, having a job which requires a lot of bending of the wrist, gripping or holding vibrating objects, or having a past injury in the wrist.

Possible treatments include wearing a wrist splint to keep the joint stable and straight, taking steroids to reduce swelling, and even surgery to relieve pressure on the nerve if other methods haven’t worked.