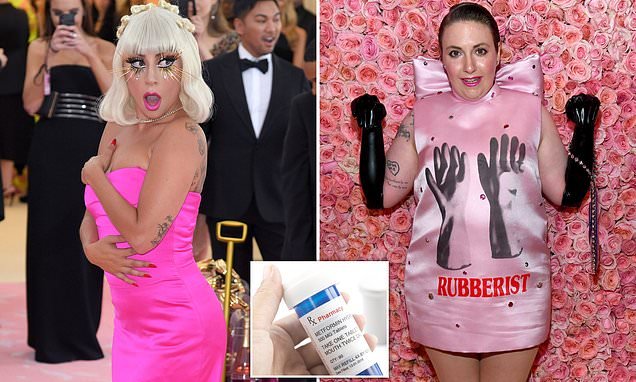 A ‘go-to’ diabetes drug could transform the lives of fibromyalgia sufferers, research suggests.

And some even saw their pain intensity go from ten out of a possible 11 to zero thanks to the commonly-prescribed diabetes drug.

The researchers also found a clear link between fibromyalgia and insulin resistance, which occurs when the body fails to respond to the hormone and skews its blood sugar control.

Insulin resistance is thought to trigger ‘dysfunction within the brain’s small blood vessels’, which may lead to widespread pain, the researchers claim.

They hope their findings will speed up the diagnosis and treatment of the condition, of which sufferers include Lady Gaga and Girls creator Lena Dunham.

Patients are currently forced to wait an average of five years before doctors get to the bottom of their symptoms.

In September 2017, Lady Gaga (left) revealed she had been diagnosed with fibromyalgia. Around a year later, Girls creator Lena Dunham (right) revealed she too had the disorder. They are both pictured at the Met Gala Camp: Notes on Fashion in New York on May 6

The research was carried out by The University of Texas Medical Branch at Galveston and led by Dr Miguel Pappolla, a professor of neurology.

Fibromylagia affects around 2.7 per cent of people worldwide, with three women suffering for every one man, the researchers wrote in the journal PLOS ONE.

Patients endure pain all over their body, with many also reporting fatigue, low mood and slow thinking.

And fibromyalgia’s burden extends well beyond its symptoms. The condition is said to cost the US alone around $100billion (£768,637,000) a year, with similar set backs occurring in Europe, the researchers wrote.

Doctors are currently forced to rely on a patient reporting their symptoms, as well as a physical examination of their tender areas.

To test metformin’s effects on fibromyalgia patients, the researchers first analysed their blood for markers of insulin resistance.

They found ‘most patients with fibromyalgia can be segregated by their HbA1c levels, a marker for insulin resistance’.

Fibromylagia is a chronic condition defined by widespread pain and fatigue.

It affects up to 2.7 per cent of people worldwide, with three women suffering for every one man, studies suggest.

Fibromylagia is often triggered by a trauma, such as a car accident or childbirth, as well as infections. Why this occurs is unclear.

The discomfort tends to be felt as aches and burning from head-to-toe.

And the fatigue ranges from feeling sleepy to the exhaustion of having the flu.

Severe sufferers are often unable to work or socialise.

The pain can be worse at some times than others and may change location, such as becoming more severe in parts of the body that are used the most.

Other symptoms can include headaches; IBS; diarrhoea or constipation; poor concentration; dizziness; allergies and stimuli sensitivity, such as to light or heat.

Studies suggest the average patient waits five years to be diagnosed, which is thought to be due to X-rays and other medical tests not picking the condition up.

It is generally defined as pain that lasts for more than three months and affects 11 or more out of 18 tender points when pressed.

An HbA1c test is often used to diagnose type 1 and 2 diabetes, as well as to check how a patient is managing their condition.

It measures the percentage of haemoglobin in a person’s blood that is coated with sugar, with higher levels suggesting their blood sugar is poorly controlled. This then implies an increased risk of diabetes complications.

The researchers then analysed 23 fibromyalgia patients who were referred to a pain-medicine clinic with myofascial pain syndrome. This occurs when putting pressure on sensitive ‘trigger points’ in the muscle causes pain there and elsewhere.

Hba1c measurements were taken from the participants and compared against age-matched controls with normal glucose levels.

A twice-daily metformin dose of 500mg was then added to the fibromyalgia sufferers’ existing painkiller regimen.

All the participants self reported their discomfort throughout the study via the 11-point Numeric Pain Rating Scale.

Results revealed a ‘dramatic decrease’ in the pain scores of those treated with metformin.

Eight out of 16 of the patients who self reported their pain as ten at the start of the study claimed it even went down to zero.

The researchers described this as ‘a degree of improvement never observed before in such a large proportion of patients subjected to any available treatment’.

This is ‘unlikely a placebo effect’ due to ‘the impressive degree of long lasting pain improvement’ and ‘non-responders’ being ‘conspicuously absent’.

This is in contrast to the patients who were treated just with their standard painkillers, who saw their discomfort go down, but rarely disappear altogether.

The researchers caution, however, fibromyalgia sufferers tend to be overweight or obese and are therefore more at risk of insulin resistance anyway.

Metformin may also relieve pain via a method independent of blood sugar control. Other drugs that also target insulin resistance should therefore be tested for their effect on fibromyalgia, the researchers added. 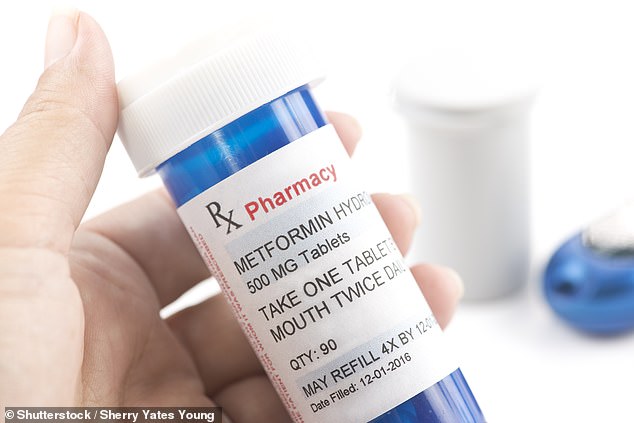 Metformin (pictured, stock) helps the body to control blood sugar in type 2 diabetes. The drug helps type 2 diabetics better respond to their own insulin, lowers  the amount of sugar created by the liver and reduces the sugar absorbed by the intestines

In September 2017, Lady Gaga revealed on Twitter she had been diagnosed with fibromyalgia.

In an interview with Vogue a year later, she claims she believes the condition was triggered by a sexual assault by a music producer at 19, as well as breaking her hip while on tour in 2013.

‘[Fibromyalgia is] really a cyclone of anxiety, depression, PTSD, trauma and panic disorder, all of which sends the nervous system into overdrive, and then you have nerve pain as a result,’ she said at the time.

‘People need to be more compassionate. Chronic pain is no joke.

‘It’s every day waking up not knowing how you’re going to feel.’

Around the same time, Girls creator Lena Dunham revealed she had also been diagnosed with fibromyalgia.

In an Instagram post in October 2018, she described how she had a flare-up after watching Dr Christine Blasey Ford testify in front of a Senate Judiciary hearing that then-Supreme Court nominee Brett Kavanaugh had raped her as a teen.

‘On the day after Dr Ford’s testimony I awoke with a start at 3am,’ Dunham wrote.

‘It felt like every cell in my neck was singing.

‘My ankles and wrists were weak and my fingers didn’t do their assigned job.

‘Yesterday I felt like I was suspended in gel and when I meditated a line of pain zipped from my neck to my foot.’

Fibromyalgia is thought to be brought on by the ‘abnormal processing’ of painful stimuli.

However, this limited understanding has done little to ease patients’ suffering, with a 2016 study concluding there has been no advances in fibromyalgia’s treatment since its discovery. 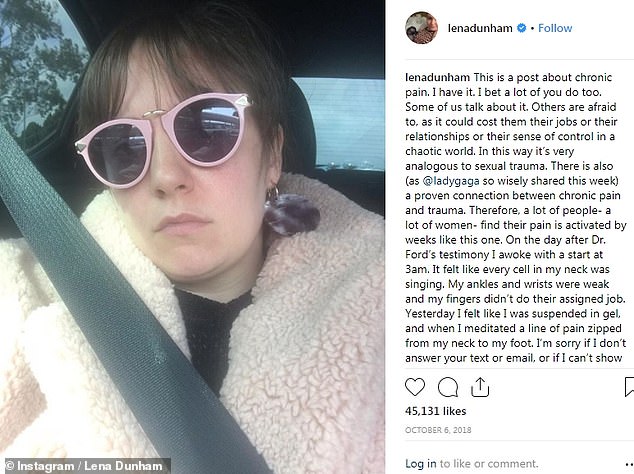 In an Instagram post from October 2018 (above), Lena Dunham revealed she had fibromyalgia and endured a flare-up after watching Dr Christine Blasey Ford testify in front of a Senate Judiciary hearing that then-Supreme Court nominee Brett Kavanaugh raped her as a teen