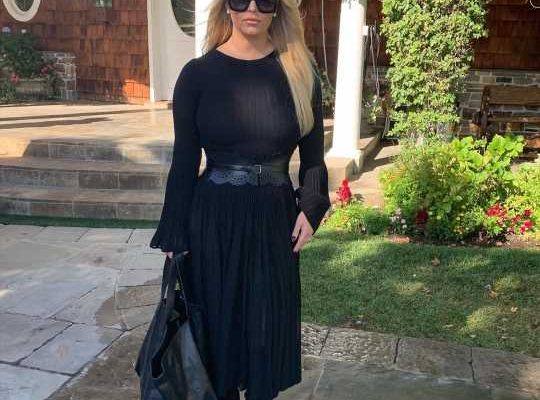 Jessica Simpson was ready for a change in the months after giving birth to her third child, daughter Birdie Mae, and she made it happen with hard work and dedication.

The actress and singer revealed Tuesday that she lost 100 lbs. in six months, and a source tells PEOPLE that she was “very committed” to the process.

“She set a goal and she went for it,” the insider says. “She had a hard time not feeling like herself.”

Simpson, 39, worked out with trainer Harley Pasternak and his co-trainer Sydney Liebes, and got back to her favorite form of exercise, walking.

“Jessica had a trainer and she was very committed to working out. She also did a lot of walking — walking is huge for her mentally and physically,” the source said. “It’s always been something she does to clear her head and for the steps.”

And the fashion designer, who recently launched JessicaSimpson.com, for her Jessica Simpson Collection “really cut out junk food.”

“She ate a lot of vegetables. She also discovered the vegetables she likes that can also be masked into different dishes. And she limited foods that were fried and high in calories. But she did not deny herself and gave herself nice heathy meals,” the source said. “She believes in moderation and she was conscious of her goal. At certain times she allowed herself to indulge.”

Simpson told PEOPLE in July that she was “working really hard” on losing weight.

“It’s not easy at all, but I am determined to feel good,” she said. “I discovered I really like cauliflower. Who knew it could be a substitute for almost anything?!”

And she’s now hit her goal. Simpson wrote on Instagram Tuesday that after she “tipped the scales at 240,” she’s where she wants to be.

“So proud to feel like myself again,” she said. “Even when it felt impossible, I chose to work harder.”

Her trainers, Pasternak and Liebes, cheered her on with posts on their own Instagram accounts.

“After being nonstop pregnant for as long as I can remember, she’s down 100 lbs. and looks younger today than she was when we met,” Pasternak wrote.

“I’m so unbelievably proud of you!!” Liebes added, writing directly to Simpson. “You have worked your ass off and the reward is priceless! You are the coolest, most hilarious, most hardworking woman I have ever met and I can’t believe how much you have accomplished in these six months.”