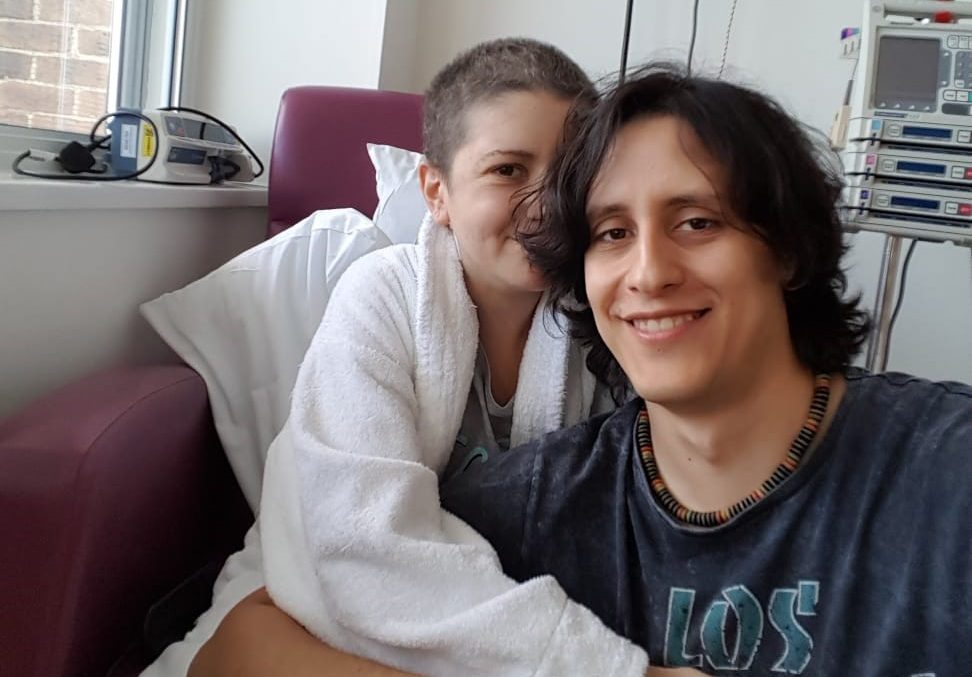 My mum tells me that when I was three, I started complaining of joint pain and, out of nowhere, I was always exhausted.

Initially, she had no idea what was wrong and thought I just wanted attention.

But after small bruises started appearing on my skin, she took me to the GP and within a few weeks I was diagnosed with Acute Lymphoblastic Leukaemia (ALL) – a type of blood cancer – in 1991.

I was treated with chemotherapy and went into remission.

But it was just two years later, aged five, that I relapsed. Strangely, I only have pleasant memories from this time, like going down to the hospital canteen for midnight snacks with my mum and brother and being told off for riding on my drip stand. I’m so grateful that Mum managed to keep our childhoods alive, despite what was happening to us as a family.

Again, after treatment, I went into remission. The first time we’d received that good news, my mum had thrown a big party to celebrate – but, after my second diagnosis, she said ‘never again’. This time, the aim was to return to normality – we saw friends, went on little holidays in the UK and went back to school.

But it turned out that this was only the start of my journey with the disease. I’ve now had leukaemia five times, most recently in 2018.

At eight, I started experiencing excruciating headaches and my mum knew something was wrong immediately.

Soon, I was diagnosed with ALL for a third time – along with a brain tumour. The hospital where I’d been treated up until this point said there was nothing more they could do for me, which was devastating.

At that age, I had a better understanding of everything, including what death was, but I struggled to comprehend that they couldn’t save me.

Fortunately, a couple of weeks later, a professor from The Royal Marsden Hospital heard about my case – and suddenly, I had options. I was offered radiotherapy and my first bone marrow transplant.

Before the transplant, you have to undergo intensive chemotherapy and radiotherapy to kill off or weaken your old cells (and any cancer cells, because you have to be in remission to receive a transplant). Cells from a donor are then given to you via a drip.

At that point, you have no immunity, so I was in isolation in hospital waiting for the bone marrow cells to take and start making new ones. It’s very scary, as there’s no guarantee it will work, and it’s dangerous, as you’re not protected by your immune system.

Though the transplant was successful, it left me weak and I had to use a wheelchair. I was constantly sick from the radiation and I didn’t fully recover until I turned 10, just before starting secondary school.

It was quite a difficult time for me as I hadn’t mixed with a lot of other children consistently through my childhood, so I was quite anxious about starting school. On the other hand, I was eager to go because I craved normality.

Despite my health problems, I settled in at school well and I was determined to catch up. I really enjoyed art and design and had a great group of friends.

Everything changed again around Christmas when I was 15. I thought I had a bad cold but one day, as I was relaxing at home, it started to affect my breathing.

My brother, aged 17 at the time, was so worried that he called my mum home from work. I was concerned – I’d never had breathing problems before but, as it was a new symptom, it never occurred to me it would be cancer again.

They took me to A&E, and then that evening I was diagnosed – this time, it was chronic myeloid leukaemia (CML), a form of the disease that affects different cells and generally progressed more slowly than acute forms, like ALL.

Also, CML is common in men over 60, not 15-year-old girls. I was gutted. There was so much I wanted to do with my life and I was worried going through treatment again would hold me back.

My amazing team at The Royal Marsden struck a delicate balance between helping me continue education and keeping a close eye on the cancer’s progression.

I was initially treated with imatinib, a form of oral chemotherapy, to get my white blood cells under control and stop the cancer from advancing. It also had minimal side effects, so I was able to go back to school, take my GCSEs and apply for college.

Unfortunately, the chemo was a short-term solution — eventually I’d need another bone marrow transplant. I really didn’t want another one because the rehabilitation from my first transplant was so intense.

I was also shaken emotionally as I was told that, had they not treated me, I would have only lived for five months. At the time, I thought I was fine but I remember being moody at school, which was out of character for me. I didn’t realise I was in shock but the news definitely changed me.

However, it didn’t destroy my ambition and I wanted to carry on with my plans for the future. I got into my first choice of college — the London College of Fashion — which was a dream come true. I love clothes and I’ve always been inspired by David Bowie, who is so cool.

I think I’m drawn to him because I stand out, too: when I was 15, I bleached my hair and dyed it red because of him. I was furious when people thought I’d done it because of Britney Spears’ hair colour in her music video for Toxic, which had just come out.

Sadly, in my final term of my first year, the cancer progressed, meaning that I urgently needed the transplant. I had it within weeks and finished college while I was in the hospital. Fortunately, it went smoothly, and I was able to start my second year of college four months later.

Although I was still on medication and had no hair, I was determined cancer wouldn’t prevent me from achieving my goals.

The next 12 years were incredible. I moved out of my parents’ house, got a degree in costume design for performance and set up my own millinery business — Amy the Hatter — five years ago.

I also met Carlos, my partner, in 2008 through a friend on a night out. We instantly clicked; we have a similar taste in music but, above all, I could just feel that he was a good person. My life has been very hectic and he’s very calm, which I craved.

Unfortunately, life threw another curveball in 2018. In January, I was suffering with constant fatigue and felt pain in my spine. My doctor thought it was sciatica, which is nerve pain from an injury or irritation to the sciatic nerve, although an MRI didn’t show anything.

By March, I was short of breath and struggling to walk. Worried, I called 111 and went to A&E, where I had a blood test. After seeing my results, I became incredibly frightened when a nurse said that I couldn’t leave because a haematologist wanted to see me.

Carlos rushed to the hospital. I told him there was only one reason why I would need to see a haematologist. Just after midnight, the doctor confirmed our fears after an agonising wait. My leukaemia was back. I was 29 and this was my fifth diagnosis.

Carlos has been an amazing physical and emotional support, particularly following my most recent diagnosis. He came to visit me every day during my transplant, sometimes staying over and sleeping in a chair by my bed. All the nurses knew him and still ask me how he is now.

My treatment — including my third bone marrow transplant — left me too weak to walk. In 2019 I was also suffering from malabsorption, which meant my ability to digest and absorb nutrients had decreased, and malnutrition, a serious condition caused by my diet not containing the right amount of nutrients

But with Carlos’ encouragement, as well as from The Royal Marsden’s Physiotherapy and GIaNTs (Gastrointestinal and Nutrition) teams, I learnt to walk again and recovered my strength. In fact, earlier this year I managed to walk 40 miles throughout January to raise money for The Royal Marsden Cancer Charity.

I’ve been in remission since October 2018, but the fear of the cancer returning is always there.

Every time I get a cough or an ache, I worry. The dread can be overwhelming. However, I’ve worked with a psychologist to help me manage these feelings.

I can never convince myself it won’t come back — it’s happened five times — but I work hard not to let the fear control me.

Last year, Carlos and I got engaged at a nature reserve. It was quite muddy, so he had to squat rather than get on one knee, but it was incredibly romantic — just us in a beautiful space.

Right now, I’m focusing on planning our wedding next year, which will be in a lighthouse in Scotland. I’m enjoying living my life my way, undictated by cancer.