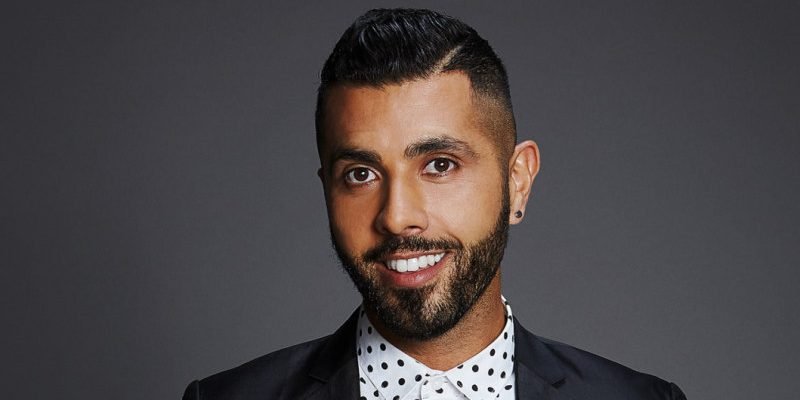 The first time Patrick Abboud marched in Mardi Gras he was so petrified of being recognised, he wore a disguise.

A closeted young gay man with Middle Eastern parents, he feared he’d lose his family if they knew the truth.

But the pull towards the colourful celebration of gay pride was strong. Dressed as an Arab sheikh and hiding behind dark glasses, he joined the sea of rainbow floats, scanning the crowd for any uncles, aunts, cousins or neighbours who might recognise him. 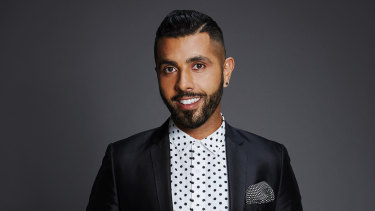 Patrick Abboud has long shed the diguise he wore to cover his identity at his first Mardi Gras..

“By the end of the parade my feet were bloodied because I had sandals on and they’d actually come off my feet and I didn’t even feel it because I was jumping up and down so much from euphoria,” he said.

“It’s such an exhilarating feeling to be so free from your shackles.”

Fast forward15 years later and Abboud is now the out and proud host of SBS’s Mardi Gras coverage as the parade marks its 41st birthday this Saturday.

When he came out, his mother wailed in despair … Now his parents invite friends over to proudly watch their son.

It has been a long, and at times painful, journey of acceptance for his parents, who are now fully supportive but struggled in the early days. Their son was the first gay person they’d ever met.

When he came out, his mother wailed in despair. When he walked into a room, his Palestinian-born father would walk out, he says.

Now, they invite friends over to proudly watch their son host the live broadcast of one of the world’s biggest gay and lesbian parades in the world.

Abboud’s decision to put himself in the national spotlight was in part driven by a desire to be the role model he never had.

Growing up in western Sydney in “one of the gayest cities in the world” he didn’t recognise himself in that scene and knew no other gay people from Middle Eastern backgrounds. At 21, he returned to his mother’s homeland, Lebanon, and it was there, in a country where
homosexuality was still illegal, that he found himself.

The biggest lesson was realising he didn’t have to choose between his sexuality and his culture.

“It was just this incredible epiphany of well maybe I am gay because now I feel like I can be myself and I don’t have to strip myself of that other half.”

Abboud is moved to tears when he thinks of how different things could have been if he’d seen someone like him on television growing up.

“It would have been absolutely life-changing. I can’t even begin to articulate how much that would have changed my journey and possibly would have saved me years and years of unnecessary grief, and also my family,” he said.

It is this representation that he feels is so important, even in a post-marriage equality era, where some might think the hard battles are over.

He says that in many multicultural communities, being gay is still stigmatised to the point of silence, leaving young LGTBI Australians dangerously isolated.

The power of Mardi Gras, Abboud believes, is not just the pride and pageantry of the parade itself but the life-changing stories shared throughout the broadcast.

After the 2015 program, he received a handwritten letter from a young gay Muslim man living in regional Australia with Palestinian parents.

“He’d been watching the broadcast locked in his bedroom with a chair against his bedroom door – his parents were outside in the lounge room – and he told me he’d written a suicide note and he’d had that sitting in his bedroom for weeks,” Abboud said.

“We had a story of a young Lebanese girl coming out and her Arab-speaking parents spoke
about it on the broadcast. Him seeing that essentially saved his life.

“He unlocked the bedroom door, came outside and handed the letter to his parents and
said, ‘This is what’s been in my mind and in my heart and this is how I’m feeling and I don’t
want to do this but I need your help’.”

After six years as host, Abboud hopes that each Mardi Gras broadcast helps empower more
people who are struggling, just as he did, to be comfortable with who they are.

“What we’re trying to do is show people that they aren’t isolated so that they get to the
point where they feel confident and comfortable and safe enough in whatever worlds
they’re moving in to step out of the shadows and to know they’re not alone.

The 41 st Sydney Gay and Lesbian Mardi Gras parade will be streamed live on SBS on Demand
on Saturday March 2, and a special broadcast will air on Sunday March 3.

Jill Stark is a journalist and author of Happy Never After: Why The Happiness Fairytale Is
Driving Us Mad