When David Hodge, 30, was told that a sperm sample he gave to an IVF clinic contained no sperm, he was devastated.

“I felt like a failure in life, really,” says Hodge, a council water operator in Forbes, NSW, who’d been tested in 2015 after he and wife Sarah were struggling to become pregnant. “It pretty much felt like it was the end of the world. You know, we’ve got cousins that have kids, and I really wanted to tick that off the bucket list, to have my own kids. And to be told, ‘no’, was just like a massive kick in the guts, really. ” 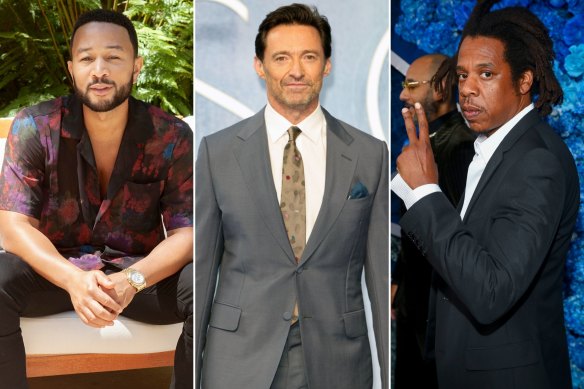 Men who have spoken publicly about grappling with fertility struggles like miscarriage, stillbirth, and an inability to conceive include, from left, John Legend, Hugh Jackman and Jay-Z.Credit:Getty Images

He cried. A lot. Mostly to his wife, who was also desperate to become a mother. Hodge discovered that he had sperm but was born without a vas deferens (a tube that carries sperm from the testis to the urethra where it leaves the body during ejaculation) – and would have to have his sperm surgically extracted from his testis if he was to be able to father his own children. But he told no one else besides immediate family for about three years.

“I was a bit ashamed,” says Hodge, who had never heard of anyone with his condition, which accounts for about one to two per cent of all cases of male infertility. “I didn’t know how people would react.”

The amount of Australian men who will encounter a fertility struggle of some kind is significant. And the emotional toll is “definitely” under-reported and isolating, says Dr Frank Quinn, a fertility specialist at IVF Australia. 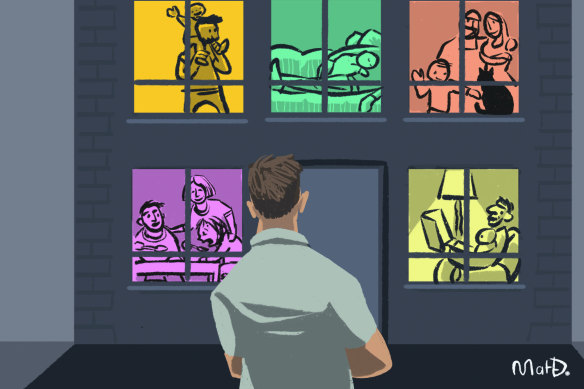 There is an emotional burden on men with infertility too.Credit:Matt Davidson

So many men, say experts, are in shock when they are confronted with the realisation that they may struggle to have a child with their partner.

“And men often times don’t verbalise or talk about their problems perhaps as much as women, and so one of the issues is that they can suffer alone to a certain degree,” says Quinn. “They’ve obviously got their partner to chat, but they’re not likely to go down to the pub on a Friday night and chat to their mates and say, ‘We’re having issues and I have a low sperm count’. So that suffering tends to be sort of quite an isolated sort of experience.”

“If they disclose that the reason they’re going to see a whole lot of specialists is because they have a sperm problem, one of the most common remarks that’s often made [to them] is ‘Does that mean you’re shooting blanks?’” he says.

There are a growing number of high-profile men who have spoken publicly about the sorrow and stress that infertility and pregnancy challenges can bring to a relationship.

“There’s often a sense of inadequacy, that they’re not normal, and some of them will feel shame,” says Quinn of many of the male patients he sees in his Sydney office. Often, this is because they have a low sperm count – or, in some cases, no sperm – which is why their partner is struggling, or unable, to become pregnant.

When a low sperm count leads to a man’s partner having to undergo the invasive medical procedures involved with IVF – like injections to harvest eggs, and then an operation to collect them – the men often feel guilty, says Quinn.

And when men have no sperm, the emotional toll can be severe, partly as a result of a pervasive expectation in our culture that men will “pass on their genes” to the next generation, says Quinn.

“It puts pressure on the best relationships,” he says. “He feels guilty, and he’s withdrawn. Because they’re [the men] thinking, ‘Why am I having sex? I don’t have any sperm, you can’t get pregnant.’ For some men, that can present later on with basically frank depression.”

“I had one client and he was incredibly supportive of his partner, and just got very much into a ‘This will happen, this will happen’ [mentality], and it kept not happening,” says Graber, of their failed IVF experiences. “She [his partner] kept miscarrying. And he became really depressed. Because it was the first time in his life where he couldn’t make something happen by being positive, by putting his mind to it. He became clinically depressed, quite significantly.

Men who must consider having to use donor sperm in order to have a child with their partner often face other anxieties.

“Because the women are still carrying the child, the guy’s worried that they’re not going to bond and connect with the baby,” says Graber, who frequently counsels couples through infertility crises. “Like, that they’ll know that it’s not theirs, and some deep primal thing will kick him and make him reject the offspring.”

Other men sometimes worry that their future children – should donor insemination be successful – will reject them.

“I’ve run several therapy groups for men who are undergoing, as a couple, donor insemination, and [the men] would often say, ‘What’s the child going to think about me, you know, when they get to be 13, 14, and we tell them how they were conceived?’” says Roger Cook, a psychologist and infertility counsellor who has researched the psychological effects of infertility on men. “[They’d say] ’We all know what adolescents are like, they’re going to say, ‘Well you’re not my father anyway.’”

Others thought they weren’t worthy husbands if they couldn’t impregnate their wives.

“They were the guys who would sometimes say to their wife, ‘Oh look, I’m not up to it here, I’m not able to produce sperm, I can’t get you pregnant, I know you want a child, why don’t you separate and you can find somebody else who can’,” says Cook, an adjunct professor at Swinburne University, of men he has interviewed about infertility.

He remembers the wives, in those scenarios, reassuring their partners and categorically rejecting this offer.

But Graber has encountered clients who haven’t been as fortunate.

She recalls one couple that had undergone numerous cycles of IVF, with no success, before the husband decided that he was “finished”, when the wife wanted to keep trying.

“I think he wanted to stop getting his hopes up, and then having it [IVF] fail,” says Graber.

The couple went to court over the use of the remaining sperm that had been stored at the IVF clinic, which she wanted to retain. “It had to be destroyed,” says Graber, about the sperm, as the court case was unsuccessful. The couple divorced.

Men also suffer distinct psychological stresses during IVF when it is their partner whose body is posing an obstacle to pregnancy, rather than their own.

“The focus really is on the woman and her experience of it, and it needs to be for a lot of it, but then they” – the men –“feel like they’ve got to be the strong one, and be there for her, and tend to neglect themselves,” says Graber.

Then there is the stress they experience when forced to have sex on demand – at a time during their partner’s menstrual cycle when they are most fertile – in order to boost the chances of conception.

“So that means the woman has to say to her partner, ‘OK, we’ve got to have sex tonight’, now that’s not always something that every man in the world can just do on demand,” says Cook, adding that the stress of this scenario sometimes leads to erectile dysfunction. (Usually, he says, this resolves once the pressure is taken off.)

Men’s stress when confronting fertility problems is often compounded because of the stereotype that women are more maternal than men.

“It’s just not even considered widely that this” – sadness at a difficulty to have children – “might be a thing for them,” says Graber. “[They get] ‘Oh, you’ll be right. You’ll get more holidays. Get to sleep in on Sundays.’.”

Creating opportunities for the men in our lives to talk about their experiences is crucial and will ensure the problem isn’t magnified, says Cook, who ran a clinic that supported people with fertility problems at Swinburne University for 20 years.

“If a man says, ‘My God, I can’t talk about this, this is so embarrassing’, that’s going to magnify the problem. So being able to express it and at least talk about it with a sympathetic partner, that’ll do a helluva lot to fixing things.”

Men who are struggling with the pressure of having sex on demand – a common stress of fertility treatments – should go out for dinner or have a glass of wine with their partner, around the time she is fertile, to “normalise” the situation, which takes the pressure out of the situation, says Quinn.

And a fertility struggle, says Graber, might upend a man’s conception of who they are and what they want – in a positive way.

“It makes them actually look at what is a man,” she says. “A man is not his sperm count. A man is not even his ability to conceive.”