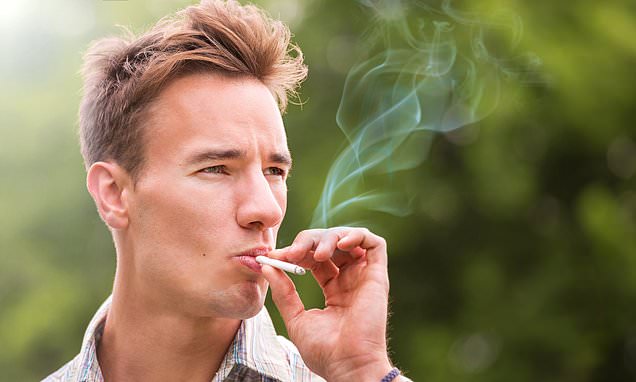 Fathers who smoke around their pregnant partners may put their unborn child at risk of asthma, research suggests.

A study found youngsters who were exposed to smoke in the womb from their dads are more likely to develop the wheezing condition by six years old.

Smoke exposure in the womb is thought to trigger DNA changes to genes that regulate our immune system.

This may lead to asthma, which can be brought on by the immune system mistakenly identifying harmless substances as ‘threats’.

It then launches a defense against these threats, which includes inflammation of the airways.

The link between a smoking mother and asthma was already known but researchers said smoke specifically from fathers, who are likely to spend a lot of time with the mother, has not been studied in detail. 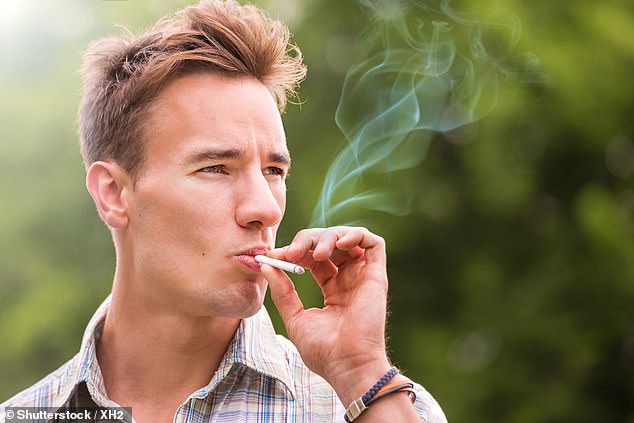 The research was carried out by Po-Zen Hospital in Kaohsiung, Taiwan, and led by Dr Chih-Chiang Wu, of the department of paediatrics.

Dr Avni Joshi, a researcher at the Mayo Clinic Children’s Center in Rochester, Minnesota, who was not involved in the study, said: ‘Smoking is bad at ANY point in time: Before the baby is born and after the baby is born.

‘Many parents defer quitting until the baby is born, but this study stresses the prenatal exposure to tobacco creates changes to the unborn child’s immune system.

‘Hence it is best to quit as a family decides to have children, even before the conception happens.’

Childhood asthma has been on the rise worldwide in recent decades, the researchers wrote in the journal Frontiers in Genetics.

One in 11 children (1.1million) in the UK are receiving treatment for asthma, Asthma UK statistics show.

And one in 12 youngsters in the US had the condition in 2017, according to the Asthma and Allergy Foundation of America.

The ‘complex disease’ is thought to be ‘programmed by early-life environmental exposure’, the researchers wrote.

Childhood asthma has long been associated with mothers smoking during pregnancy.

Several studies have found women who light up while expecting are more likely to have children who wheeze.

However, less was known about how fathers who smoke influence their child’s later lung health.

To uncover this, the researchers followed 756 babies over six years.

The infants’ parents were asked about their smoking habits.

Asthma is a common but incurable condition which affects the small tubes inside the lungs.

It can cause them to become inflamed, or swollen, which restricts the airways and makes it harder to breathe.

The condition affects people of all ages and often starts in childhood. Symptoms may improve or even go away as children grow older, but can return in adulthood.

Symptoms include wheezing, breathlessness, a tight chest and coughing, and these may get worse during an asthma attack.

Treatment usually involves medication which is inhaled to calm down the lungs.

Triggers for the condition include allergies, dust, air pollution, exercise and infections such as cold or flu.

If you think you or your child has asthma you should visit a doctor, because it can develop into more serious complications like fatigue or lung infections.

Almost one in four of the babies were exposed to tobacco in the womb via their fathers.

This is compared to just 0.2 per cent of the mothers who lit up while pregnant.

Results revealed 31 per cent of the children whose fathers smoked while their partners were pregnant suffered from asthma by the time they were six.

This is compared to just 23 per cent of the youngsters who developed asthma despite their fathers not smoking.

Asthma was more common among the children whose fathers were heavy smokers.

Of those whose dads got through more than 20 cigarettes a day, 35 per cent developed asthma.

This is compared to 25 per cent of the youngsters whose fathers smoked less than 20 cigarettes over 24 hours and 23 per cent of the children whose dads did not light up at all.

In a second part of the experiment, the researchers analysed DNA from the umbilical-cord blood of the babies.

This was collected immediately after the infants had been born, and again at 18 months and six years old.

They found the more fathers smoked during their partners’ pregnancies, the more methylation occurred along three genes that are involved in immune system function.

Methylation is the addition of the organic compound methyl to DNA, which modifies how genes are expressed.

The youngsters with the highest degree of methylation were almost twice as likely to develop asthma in early childhood.

However, smoking was not linked to the onset of allergies among the children or their levels of the IgE antibody.

IgE increases in response to an allergen, such as pollen, triggering a range of symptoms like rash, sneezing and swollen lips.

This suggests asthma that is triggered by tobacco exposure is unlike allergic asthma, which is driven by exposure to an allergen or excessive levels of the IgE antibody.

The researchers, stress, however, the study was not designed to uncover how parents who smoke during pregnancy may directly cause methylation.

It also unclear how these DNA alterations lead to asthma, they add.