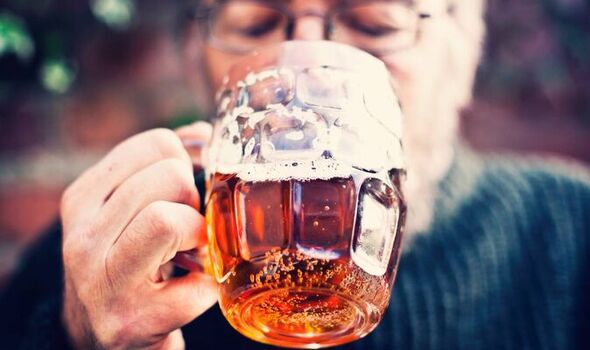 Data from almost half a million people enrolled in the UK Biobank were used by the team to look for telltale genetic markers which show how much alcohol a person drinks. People with healthier, longer DNA telomeres are also thought to have longer lifespans and length was measured from swab tests.

The top 40 percent of drinkers, who consumed more than 17 units of alcohol a week, were found to have telomere shrinkage caused by alcohol consumption.

The remaining 60 percent of people, who drink less than 17 units a week, were found to be genetically undamaged.

“Shortened telomeres have been proposed as risk factors which may cause a number of severe age-related diseases, such as Alzheimer’s disease.”

“Our results provide another piece of information for clinicians and patients seeking to reduce the harmful effects of excess alcohol.”

“The dose of alcohol is important as even reducing drinking could have benefits.”

The NHS recommends people do not drink more than 14 units a week and that this should be spread over at least three days to avoid binge-drinking.

Telomeres are repetitive DNA sequences that cap the end of chromosomes, protecting them from damage.

Telomere length is considered an indicator of biological aging, since 50-100 DNA bases are lost each time a cell replicates.

Once telomeres become too short, cells can no longer divide and may even die.

The study found someone who drinks 32 units a week – 14 pints of 4 percent strength beer – was biologically three years older than someone who consumed four pints a week.

Dr Richard Piper, chief executive of Alcohol Change UK, who were not involved in the study, said: “This particular study shows clear links between consuming alcohol and ageing, and points towards a possible link between alcohol and Alzheimer’s.”

“The researchers are transparent that this study does not prove a causal link, but they also make a well-argued case about the likely biological mechanism.”

“There is an ever-larger body of science showing how exactly alcohol causes so much ill-health and so many early deaths.”

The findings are published in the journal Molecular Psychiatry.