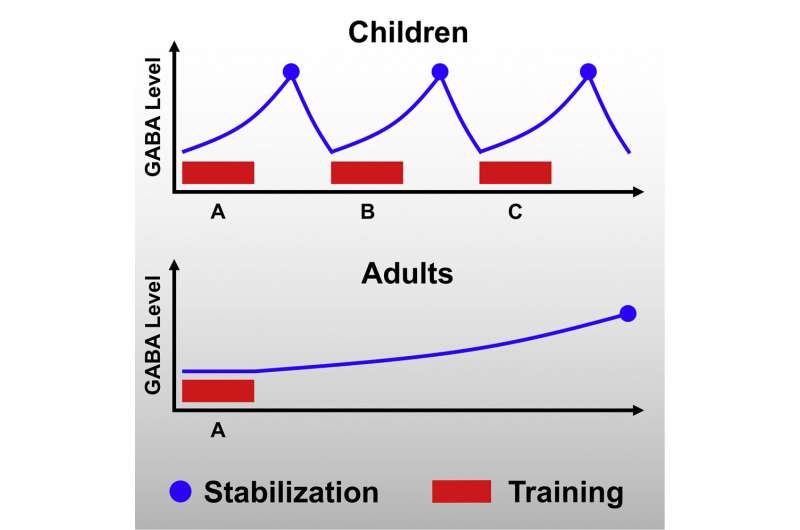 If you’ve ever had the feeling that your elementary school kids were “smarter” than you—or at least capable of picking up new information and skills faster—a new study in Current Biology on November 15 suggests you’re absolutely right. The new study also offers a reason: kids and adults exhibit differences in a brain messenger known as GABA, which stabilizes newly learned material.

“Our results show that children of elementary school age can learn more items within a given period of time than adults, making learning more efficient in children,” said Takeo Watanabe of Brown University.

Their findings showed that children have a rapid boost of GABA during visual training that lasts after training ends. That’s in marked contrast to the concentrations of GABA in adults, which stayed constant. The findings suggest that children’s brains respond to training in a way that allows them to more quickly and efficiently stabilize new learning.

“It is often assumed that children learn more efficiently than adults, although the scientific support for this assumption has, at best, been weak, and, if it is true, the neuronal mechanisms responsible for more efficient learning in children are unclear,” Watanabe said.

Differences in GABA were one obvious place to look for answers. While previous studies already had, the researchers noted that GABA in kids had only been measured at one time-point. It also wasn’t measured at a time that had any special significance in terms of learning.

So, they set out in the new study to see how GABA levels change before, during, and after learning. They also wanted to see how that differed between kids and adults.

What they saw in adults that were offered the same visual training was notably different. In adults, there were no changes in GABA whatsoever.

The discovery predicts that training on new items rapidly increases the concentration of GABA in children and allows the learning to be rapidly stabilized. Further experiments also supported this.

“In subsequent behavioral experiments, we found that children indeed stabilized new learning much more rapidly than adults, which agrees with the common belief that children outperform adults in their learning abilities,” says Sebastian M. Frank, now at the University of Regensburg, Germany. “Our results therefore point to GABA as a key player in making learning efficient in children.”

The findings suggest that children are likely to acquire new knowledge and skills more rapidly than adults, they say. It should add further encouragement for teachers and parents to give children many opportunities to acquire new skills, whether that’s learning their times tables or riding a bike.

The findings also may change neuroscientists’ conception of brain maturity in children.

They say such differences in maturation rates between brain regions and functions should be examined in detail in future studies. They also want to explore GABA responses in other types of learning, such as reading and writing.