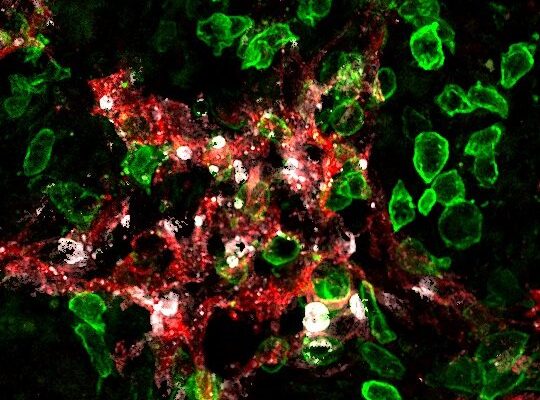 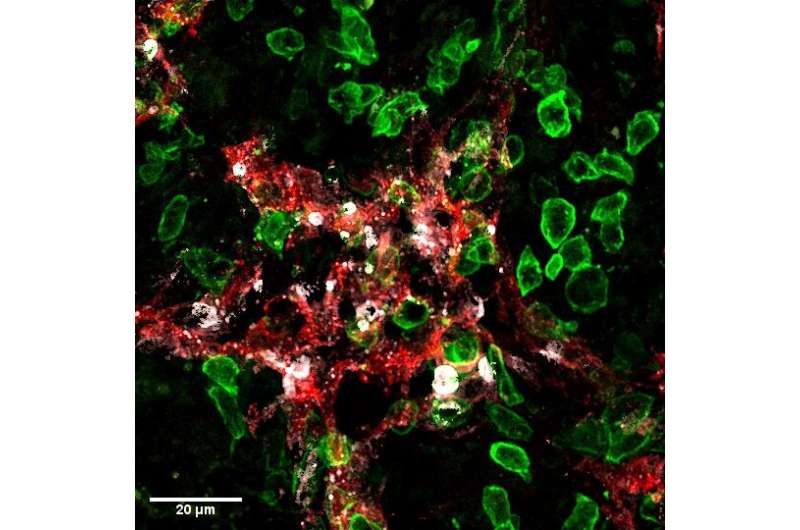 To grow, tumors rely on a specific structure, the tumor stroma. This includes blood vessels, which provide the nutrients necessary for the multiplication of diseased cells, and of lymphatic vessels, through which they migrate to metastasize. The development of lymphatic vessels—a mechanism known as lymphangiogenesis—in and around a tumor is therefore of poor prognosis. A team from the University of Geneva (UNIGE) has demonstrated how “killer” T-cells used in immunotherapy to eliminate cancer cells can also destroy tumor lymphatic vessels, thus greatly reducing the risk of metastasis. Exploiting this synergistic effect could increase the effectiveness of treatments against cancers where lymphangiogenesis is important, such as colorectal cancer, melanoma, or breast cancer. These results can be read in the journal Science Advances.

The lymphatic system is the main route through which cancer cells spread in the body. They first colonize the sentinel lymph nodes, then move to give rise to secondary metastases elsewhere in the body. However, therapies to block tumor lymphangiogenesis have so far been disappointing. “Indeed, they also represent the route for some immune cells, the dendritic cells, to exit from the tumor and activate anti-tumoral killer-T cells,” explains Stéphanie Hugues, Associate Professor in the Department of Pathology and Immunology and in the Geneva Center for Inflammation Research of the UNIGE Faculty of Medicine, who led this work. “We must therefore find a balance in order to inhibit this mechanism without blocking it completely, and thus decipher its mode of action in detail.”

To do this, the scientists used so-called “killer” T lymphocytes used in immunotherapy protocols. “These T-cells are immune cells specifically activated in labs to eliminate tumor cells, before being injected to patients,” explains Laure Garnier, a junior lecturer in Stéphanie Hugues’ laboratory and first author of this work. “Here, we injected them into mice suffering from melanoma. And if, as expected, the killer lymphocytes destroyed the tumor cells, they also attacked the lymphatic endothelial cells that line the lymphatic vessels.”

Indeed, the destruction of cancer cells leads to the release of tumor antigens. These small cancerous parts are then captured by the lymphatic endothelial cells which, having become carriers of tumor identification markers, are also recognized as enemies by the T-cells that attack them. This mechanism therefore disrupts the tumor-associated lymphatic system to significantly reduce the risk of metastasis without blocking it entirely.

The research team confirmed these results with other approaches, such as vaccination, which aims to strengthen the immune system. “We also observed the destruction of lymphatic endothelial cells, and consequently a decrease in lymph node metastases, thus limiting the risk of secondary metastases. Moreover, as this action only takes place in the tumor microenvironment, no systemic effect is to be feared,” emphasizes Laure Garnier.

How can this effect be strengthened without jeopardizing the action of the immune cells, which need the lymphatic vessels to enter the tumor? There are several options, such as intervening once immunity has been established, or in conjunction with therapeutic protocols where the immune system is so strong that limiting lymphangiogenesis would not impair its function. “Nevertheless, our results show that the most effective approach is to use killer T-cells generated in the laboratory, and therefore ready to attack, in order to bypass the first phase of activation, which can prove problematic,” says Stéphanie Hugues.