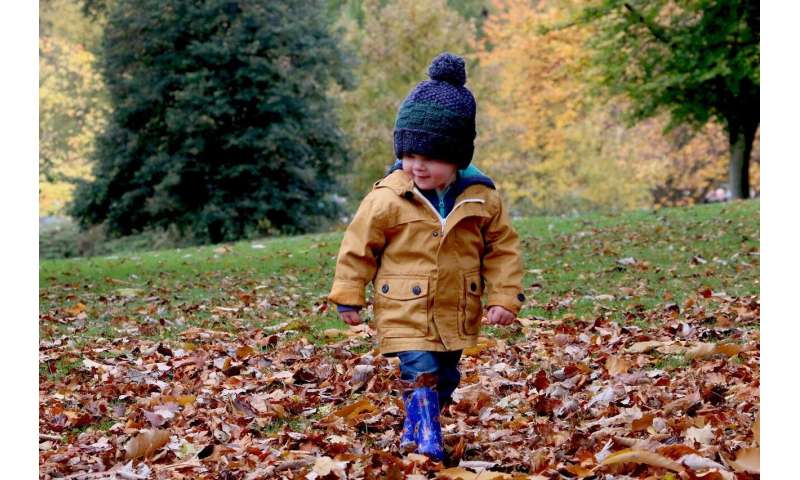 Preschoolers may not be as good at resisting large portions of everyday foods as was previously thought, according to Penn State researchers.

In a study, the researchers examined whether children between the ages of three and five were susceptible to the portion size effect—the tendency of people to eat more when larger portions are served.

They found that when served larger portions of typical meals or snacks, the children consumed more food, both by weight and calories.

Alissa Smethers, a doctoral student in nutritional sciences, said the findings—recently published in the American Journal of Clinical Nutrition—suggest that caregivers should pay close attention to not just the amount of food they serve but also the variety of food.

“It’s hard to define portions that are appropriate for all preschoolers, since their calorie requirements vary due to differences in height, weight and activity level,” Smethers said. “But it’s a good idea to look at the proportions of different foods you’re serving, with fruits and vegetables filling up half the plate and with smaller portions of more calorie-dense foods, as recommended in the USDA MyPlate nutrition guide.”

Barbara Rolls, Helen A. Guthrie Chair and director of the Laboratory for the Study of Human Ingestive Behavior at Penn State, added that the results also suggest that the portion-size effect can be used strategically by caregivers to help children eat more fruits and vegetables.

“The positive side is that you can use the portion size effect strategically, for example by serving larger portions of fruits and vegetables to increase their consumption,” Rolls said. “You can also serve them at the start of the meal or on their own as snacks. When there are no other foods competing with them, kids may be more likely to eat them.”

Smethers said that while it was known that adults are likely to eat more when served larger portions of food over time, it was thought by some researchers that young children can sense how many calories from food they need and adjust their eating habits accordingly, a process called “self-regulation.”

Previous studies have tested this theory by looking at children’s eating habits at one meal or over a single day. But Smethers said it may take longer—up to three to four days—for self-regulation to kick in, and so she and the other researchers wanted to study the portion size effect in children across a full five days.

The researchers recruited 46 children between the ages of three and five from childcare centers at the University Park campus for the five-day study. All meals and snacks were provided for the children, who during one five-day period received baseline-sized portions—based on Child and Adult Care Food Program requirements—and during another period had portions that were increased in size by 50 percent.

“In the larger portion meals, we wanted to serve portion sizes that the children might encounter in their everyday lives,” Smethers said. “For example, instead of getting four pieces of chicken nuggets, they would get six, for a 50 percent increase.”

During both five-day periods, the children were allowed to eat as much or as little of their meals or snacks as they wanted. After the children were done eating, the leftover foods were weighed to measure how much each child consumed.

Additionally, each child wore an accelerometer throughout each five-day period to measure their activity levels, and the researchers measured their height and weight.

After analyzing the data, the researchers found that serving larger portions led to the children eating 16 percent more food than when served the smaller portions, leading to an extra 18 percent of calories.

“If preschoolers did have the ability to self-regulate their calorie intake, they should have sensed that they were getting extra over the five days and started eating less,” Rolls said. “But we didn’t see any evidence of that.”

The researchers also found that children with higher BMI percentiles for their age were more likely to be influenced by larger portions. Additionally, the portion size effect seemed stronger in children with overweight or obesity than for children without.