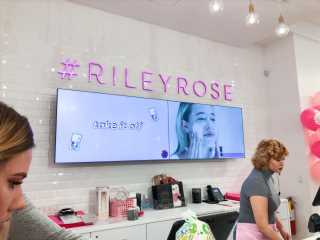 Riley Rose is shuttering all of its freestanding stores, stopping orders on its web site and moving the brick-and-mortar beauty concept into existing Forever 21 locations.
The store closures come a month after Forever 21 filed for Chapter 11 protection. Sources told WWD that a letter was sent out this week to brands sold at Riley Rose, informing them of the news.
A notice posted on rileyrose.com states, "We are moving! As of 10/28, we welcome you to our new home located on the Beauty by Riley Rose tab at forever21.com, where you can continue to purchase your favorite products and on 10/15, we'll stop taking orders at rileyrose.com."
At least one beauty brand at press time has told WWD it plans to cut ties with the retailer.
The first Riley Rose store was opened in 2017, and was seen to the industry as an attempt by Forever 21 to capitalize on dragging mass market beauty sales in drugstores and swelling consumer interest in affordable digitally native and K-beauty brands. As of this year, about 15 Riley stores were operating in malls across the country, most of them owned by General Growth Properties. The first East Coast location, opened in late 2017 at the Brookfield Properties-owned Bridgewater Mall in New Jersey, closed at some point this year, prior to the bankruptcy, a source told WWD. A location opened in November 2017 at The Shops at La Cantera, another Brookfield-owned property, shuttered in March.
Forever 21 filed for Chapter 11 in September, and touted the bankruptcy as an opportunity to "rightsize its store base and return to basics." Under the terms of the Chapter 11 restructuring strategy, it was announced the retailer is to close most of its international locations in Asia and Europe, along with up to 178 doors in the U.S., though many of its U.S., Mexico and South America locations are to remain open and operating.
Forever 21 did not respond for comment at press time. It is not known how many Riley Rose shop-in-shops will open inside Forever 21 stores. However, the first shop-in-shop opened in July, in the New York Penn Station store.
More From WWD:
Undercover Shopper: Riley Rose
Forever 21 Falls, A Fast-Fashion Bankruptcy
Forever 21 Strapped for Cash as Rent Bills Loom
Source: Read Full Article