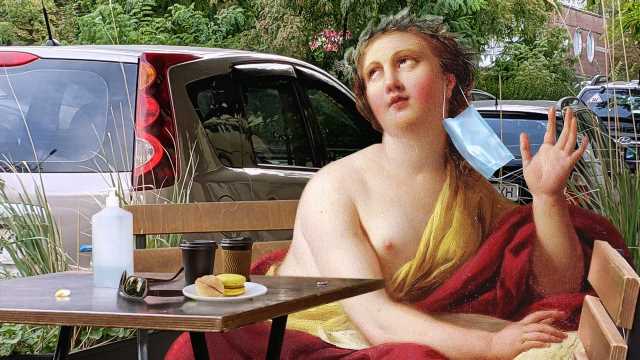 To be alive is to experience stress. Or, to be more dramatic: Life is suffering. But none of us could have prepared for the stress — abject, encompassing — that 2020 would bring. In January, America began the year with the baseline anxiety that the killing of an Iranian general by a U.S. drone strike might plunge us into World War III. Things generally went south from there.

Now, as COVID-19 works its way through the country, so does another ailment. Risk factors include sudden changes in routine, social isolation, fear of getting sick or making others sick, and financial insecurity. Symptoms range from nausea to hives. To get a better picture of how the pandemic has shifted the American psyche, I spoke with therapists across the country — and every provider I asked said mental health conditions like chronic stress, anxiety, and depression have spiked since March.

Stress isn't always this expansive and threatening. But when you factor in a global health crisis that adds emotional and physical stress and subtracts many coping mechanisms, it can manifest in new, seemingly unconquerable ways. "If you've had a hard day, you can't just go out for a run or head to a friend's house," says Austin-based therapist Grace Dowd. "These things might not be safe."

Losing your hobby or a familiar routine is enough to provoke grief, but probably nothing is as profound as the loss of connection with other people, of all the nuance and support of in-person interaction. Now, deciding whether to see a friend feels a lot like being forced to make a choice between your physical and mental health.

"There are often no right answers, but the consequences [of every decision] feel so high," says Ali Mattu, a clinical psychologist in the San Francisco Bay area. "Everything feels high stakes."

There’s a cruel feedback loop to chronic stress: Anxiety can trigger physical symptoms, like nausea or a sore throat, which can create new anxieties about catching the virus and/or contributing to a pandemic. Like body, like mind: All of this persistent, mounting stress in our everyday lives can exacerbate existing mental health conditions, or trigger new ones.

Jessica Harris, a therapist based in Maryland, says she’s seeing more cases of anxiety and depression among her clientele; plus, people who have been sick themselves or lost a loved one to COVID-19 are showing signs of trauma. According to Mattu, chronic stress is also known to impact physical health, even compromising the immune system. And the strain is worse for Black Americans during yet another public referendum on police violence and systemic racism.

Ednesha Saulsbury, a therapist at Be Well Psychotherapy in New York City, reports that many of her Black clients are dealing with PTSD symptoms, anxiety, hypervigilance, and avoidance since the death of George Floyd in May.

Apologies if reading this has so far created more anxiety in your own life, but we promise, there is good news: Stress has spiked for most of us, but therapists say personal growth has too. For example, some people are taking stock of their lives and rearranging priorities to match their values. Dowd says a crisis of this scale can enable people to pull the trigger on major life decisions they had been putting off, such as moving in with a partner, quitting a job they hate for a more satisfying one, or getting married or divorced. She chalks this up to people having ongoing feelings of restlessness and being "stuck."

"The pandemic is the great accelerant," she says, citing a strange blend of boredom and anxiety that can fast-track plans to fruition. A sense of hopeful desperation amid a complete absence of certainty is also leading people to rekindle old spiritual practices, or start new ones. Mindfulness practices, meditation, and yoga — especially practiced first thing in the morning as a tone-setter for the inevitably stressful day ahead — help people be more present, even taking the edge off anxiety symptoms, Saulsbury says.

More good news: Therapy has become a bigger priority than ever. Early on in the pandemic, that wasn’t necessarily the case: Saulsbury says numerous clients dropped out of therapy due to financial insecurity or the lack of privacy in tiny New York apartments (at least one of her patients had to conduct therapy in the bathroom). But several months in, the tide has turned. Now, she says, more people are willing, even desperate, to talk through their problems.

Everyone has a different story, but a common theme in session is self-compassion. People beat themselves up about not achieving at work the way they did pre-pandemic, or for being "bad friends" or "bad partners," which creates a sense of ongoing, low-level guilt. Both Dowd and Saulsbury say they focus on normalizing disappointment and grief — these are, as they say, unprecedented times — and encouraging people, in general, to take it easier on themselves.

With all the unexpected pain and confusion 2020 brought, it’s easy to view the year as a wash. But Saulsbury says she doesn’t see it that way and neither do an astounding number of her clients. "I talk to a lot of people who say 2020 helped them sit with their feelings in a way they hadn’t before, to figure out what they wanted, and to figure out what’s important to them," she says. "So many people have lost their lives. It makes sense that we’re thinking about ours in a different way." Or, in other words: After a long night, dawn is inevitable. —Ashley Abramson is a writer in Minneapolis.