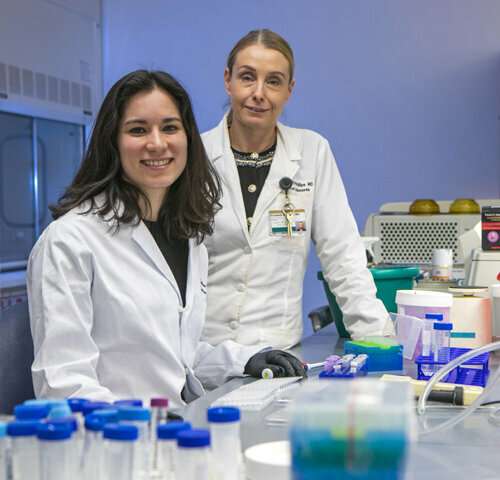 Researchers at Vanderbilt University Medical Center and colleagues have identified a gene that increases the risk for a severe and potentially life-threatening reaction to the commonly prescribed antibiotic vancomycin.

Routine testing for this gene could improve patient safety and reduce unnecessary avoidance of other antibiotics, they reported in the Journal of Allergy and Clinical Immunology.

“We think this test will be important in the clinical care of patients starting vancomycin and will prevent mortality and short- and long-term complications,” said the paper’s senior author, Elizabeth Phillips, MD, an internationally known expert on severe adverse drug reactions.

“This observation also represents significant progress as we zero in on the mechanisms of these life-threatening immune-mediated drug reactions,” she said.

Vancomycin is commonly given in the hospital or as home intravenous therapy for several weeks in combination with other powerful antibiotics to treat serious and potentially life-threatening bacterial infections.

Within two to eight weeks of initiating antibiotic therapy, however, some patients develop a severe reaction known as DRESS—Drug Rash with Eosinophilia and Systemic Symptoms—characterized by fever, widespread skin rash and internal organ damage caused by an aberrant T-cell mediated immune response to the drug.

When DRESS develops, all treatment is stopped. The mortality rate that results, often from a combination of organ damage, the need for strong immunosuppressants such as steroids and compromised treatment options for the underlying infection, approaches 10 percent.

While the true incidence of DRESS is not known, every year in the United States “hundreds of thousands of patients are at risk,” said Phillips, the John A. Oates Professor of Clinical Research and professor of Medicine, Pharmacology and Pathology, Microbiology and Immunology at VUMC and Vanderbilt University School of Medicine.

For several years, vancomycin has been known to be a common antibiotic trigger for DRESS, however the genetic risk factors predisposing specific patients were not known.

Through a detailed search mechanism and review of the records they were able to identify that patients in the databank who developed DRESS while taking vancomycin had an over-representation of the genetic variant HLA-A*32:01.

The researchers confirmed their findings in a prospective cohort of patients from VUMC and Australia who had been diagnosed with DRESS.

Since many patients who develop DRESS are often exposed to multiple antibiotics and other drugs simultaneously, the researchers used a specific diagnostic test developed in their laboratories called gamma-interferon ELISpot, which exposed patients’ white blood cells to vancomycin and other concurrently administered antibiotics.

This test enabled them to determine which drug was most likely causing DRESS.

Combining the BioVU and prospective data, the research-ers found that 86 percent of patients who developed probable vancomycin-associated DRESS carried HLA-A*32:01, compared to none of the matched control patients who received vancomycin for several weeks and did not develop a reaction to it.

By conducting a survival analysis of the BioVU patients with HLA-A*32:01 versus controls who did not carry the risk allele, the researchers determined that approximately 20 percent of patients who started vancomycin and who carried the HLA variant developed DRESS within four weeks.