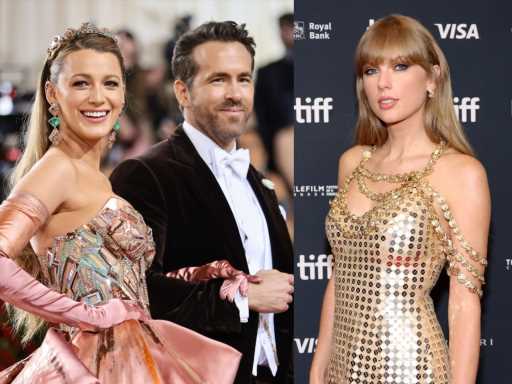 With Taylor Swift‘s new album drop comes fervent speculation from her fans about sly messages hidden in the lyrics of Midnights’ tracks, and like she so cleverly did with Folklore’s “Betty,” Swifties think their queen revealed the name of Blake Lively and Ryan Reynolds‘ next child in one of her new songs.

Speculation is ablaze on Twitter about the track “You’re On Your Own, Kid,” which includes the phrase “So long, Daisy May” after the first chorus. If you’re waiting for a climax or an “Aha!” moment that confirms this line is hard evidence of Baby Reynolds’ No. 4‘s name, don’t hold your breath — “So long, Daisy May” is all the Swifties need to be utterly convinced that Lively and Reynolds’ little bundle of joy is sure to be given the sweet moniker.

One fan tweeted, “Calling it now Blake Lively & Ryan Reynolds baby is going to be named Daisy Mae #MidnightsTaylorSwift.” Another joined in the speculation, writing, “The only name I’m hearing on this new album is Daisy… is this @VancityReynolds & @blakelively new baby’s name?? #callingitnow.”

Proving the Swifties have impressive group-think, another fan tweeted, “I love coming to Twitter to confirm things like — yes other people also think Daisy May/Mae is the name of Blake Lively’s baby.”

The previously mentioned 2020 Folklore track, “Betty,” included the names of Lively and Reynolds’ two eldest daughters, James and Inez, in the song’s lyrics, with its title being the name of their unborn third daughter — a piece of information the famous couple hadn’t yet revealed when the album dropped. Hence, Swifties are now excitedly predicting Lively and Reynolds’ fourth child will be named Daisy May after the sole name drop on Midnights.

During a SiriusXM Town Hall special with Jess Cagle in August 2021, Reynolds spoke about “Betty,” saying, “The names [in the song] are the names of our kids. We trust [Swift] implicitly — she’s very sensitive to any of that stuff. And obviously the song has nothing to do with our kids other than our kids’ names. But I mean, what an honor.” He continued, “We thought it was pretty damn amazing. We still do. You know, I still walk down the street and shake my head thinking ‘I can’t believe that happened.’”

Lively and Reynolds’ eldest daughter also made an audio cameo on Swift’s 2017 reputation track “Gorgeous.” At the beginning of the song, a child says “gorgeous,” and it turns out the sweet little voice belongs to James.

The couple was so excited about their daughter’s Easter egg moment that they went to one of Swift’s concerts to experience it live in 2018. In a beyond-precious video taken by a fellow concert attendee, Lively and Reynolds are seen all-out fangirling and jumping up and down in the moments before hearing James’ voice on the loudspeakers, with Lively excitedly filming the experience.

Only time will tell if Taylor Swift is truly the Grand Revealer of the Lively/Reynolds kids’ names — we’ll have to wait until early 2023 to find out if the couple’s springtime baby is a Daisy after all.