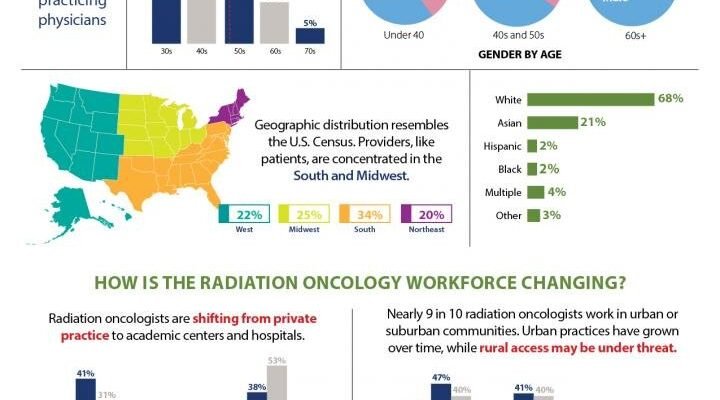 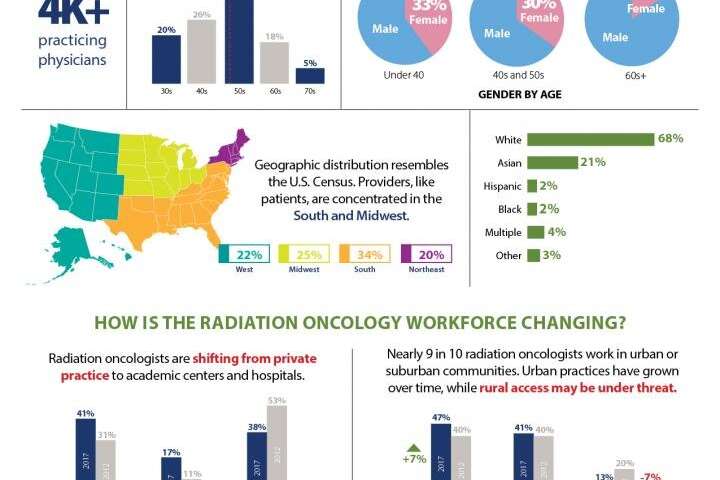 The newest study of America’s radiation oncology workforce finds that gender and race gaps have narrowed slightly, although persistent and growing geographic disparities point to a need for more equity in access to radiation therapy care. The survey, which drew responses from more than 1,100 physicians across the country, finds that fewer radiation oncologists are practicing in rural communities and that these doctors are more likely to retire in the coming years.

Key takeaways from the study include:

(1) Shift from rural to suburban and urban locations: Nearly nine in 10 radiation oncologists work in urban or suburban communities (47% and 41%, respectively). Since the previous workforce survey in 2012, the proportion of rural radiation oncologists declined from 16 to 13 percent, indicating that rural access to radiation therapy services may be under threat.

The trend may be exacerbated by disproportionately more physicians leaving the rural workforce and fewer new physicians taking positions in these communities. Nearly 30 percent of radiation oncologists in rural communities plan to retire or reduce hours in the next five years, compared to 18 percent of urban/suburban physicians. Moreover, surveys of recent radiation oncology graduates point to growing demand for jobs in major cities coupled with waning demand for those in smaller cities.

In response to this trend, ASTRO launched an initiative in early 2019 focusing on rural access to radiation oncology care. A group of physicians led by former ASTRO Chair David Beyer, MD, FASTRO, will explore factors behind the shift, as well as strategies to protect and bolster access.”One in five Americans—about 60 million people—live in rural communities, and most of these people want their medical care close to home. For many patients, access is the difference between being treated or not being treated, and so we are trying to understand—what are the obstacles that keep a lack of access from being their reality?” said Dr. Beyer. “Unfortunately, this trend is not unique to radiation oncology and is a problem across health care. In the rural Arizona community where I practice, for example, there is a shortage of primary care physicians. There is a shortage of surgeons. There are many shortages.”

(4) Widespread adoption of new technology: 95 percent of practices offer shortened, or hypofractionated, radiation therapy, providing their patients a more convenient treatment option without increasing the risk of side effects or the cancer returning. The most common tumors for hypofractionation include breast tumors (94% of practices), bone metastases (92%) and brain metastases (74%). Clinics also increased adoption of advanced technologies and techniques for providing radiation therapy treatments, such as stereotactic radiation and real-time image guidance.

“In some ways, the radiation oncology workforce is changing to look more like the patients we treat. The modest but noticeable increases in the number of women and racial/ethnic minorities, for example, indicate that our field is moving toward more equity,” said Claire Y. Fung, MD, Chair of the ASTRO Workforce Subcommittee, which conducted the study, and a radiation oncologist at Beth Israel Deaconess Medical Center in Boston. “The shifts in employment patterns and the movement from rural practices to urban hubs, however, point to possible areas of disparity in access to care. Studies such as this one help ASTRO and other health care groups recognize these threats and address them proactively.”