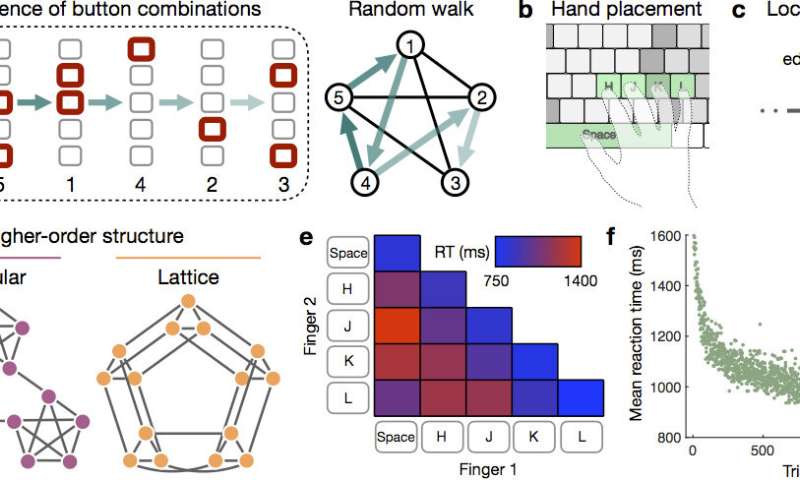 During their first year of life, infants can recognize patterned sound sequences. As we grow, we develop the ability to pick out increasingly complex patterns within streams of words and musical notes. Traditionally, cognitive scientists have assumed that the brain uses a complicated algorithm to find links between disparate concepts, thereby yielding a higher-level understanding.

Researchers at the University of Pennsylvania—Christopher Lynn, Ari Kahn and Danielle Bassett—are building an entirely different model, indicating that our ability to detect patterns might stem, in part, from the brain’s desire to represent things in the simplest way possible.

The brain does more than just process incoming information, said Lynn, a physics graduate student. “It constantly tries to predict what’s coming next. If, for instance, you’re attending a lecture on a subject you know something about, you already have some grasp of the higher-order structure. That helps you connect ideas together and anticipate what you’ll hear next.”

The new model offers striking insights on human cognition, suggesting that people can and indeed do make mistakes in detecting individual components of a pattern in order to catch a glimpse of the bigger picture. For example, Lynn explained, “if you look at a pointillist painting up close, you can correctly identify every dot. If you step back 20 feet, the details get fuzzy, but you’ll gain a better sense of the overall structure.” The brain may well adopt a similar strategy, he said.

To test its theory, the team developed an experiment in which people view a computer screen depicting a row of five squares and then press one or two keys to match the display they see. The researchers timed the responses, concluding that people hit the correct keys more quickly when they anticipate what’s coming next.

As part of the experimental setup, each stimulus presented to a subject could be viewed as a node in a network, with one of four adjacent nodes representing the next stimulus. The networks come in two forms—a “modular graph” consisting of three linked pentagons and a “lattice graph” consisting of five linked triangles. Subjects reacted more quickly when presented with the modular graph, suggesting they could better discern its underlying structure and, hence, better anticipate the image to follow.