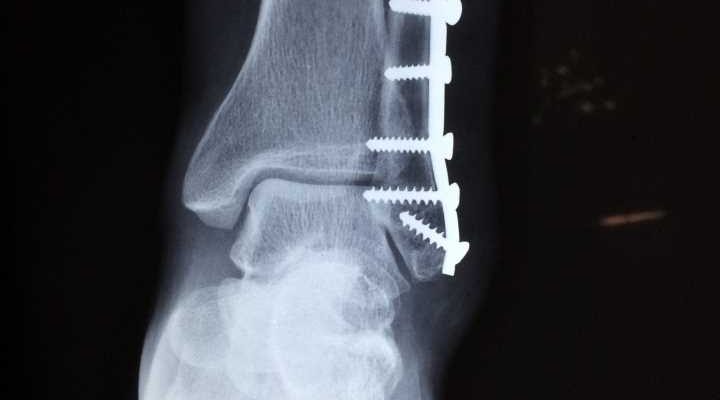 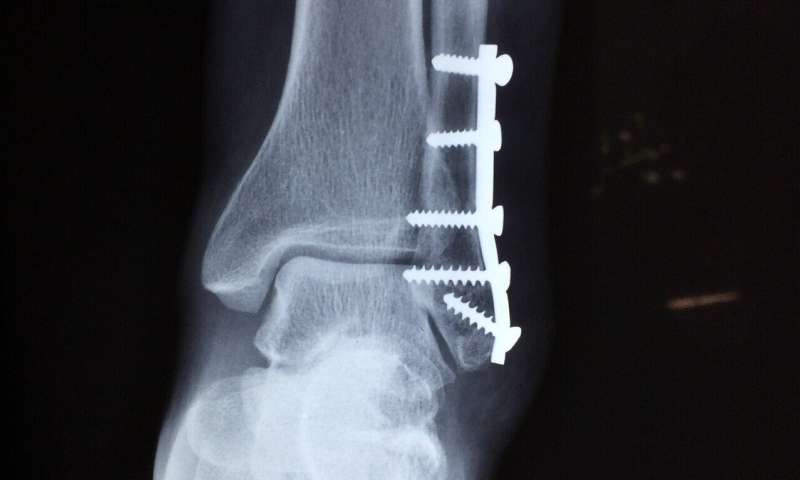 Where bones fracture, surgeons often have to join the fragments with implants. Magnesium orthopedic screws, which over time dissolve in the body, spare patients another operation after healing is completed and reduce the risk of infection. What happens inside the body during this process, though, is still largely unknown. To develop optimized alloys and orthopedic screws with functionalized surfaces, Empa researchers are now investigating magnesium corrosion.

When surgeons want to fix bone fragments after a fracture, the critical question is what type of implants to use: screws and plates made of titanium or steel, which are mechanically and chemically very stable in the body, but have to be removed later on by another surgical procedure? Or implants made of organic materials that dissolve over time but can have certain other drawbacks, such as lack of mechanical strength or unfavorable degradation products? Empa researchers are currently working on solving this dilemma: tiny magnesium implants and screws. These are mechanically robust at first but dissolve later on in the body in a controlled way that does not cause tissue damage.

Such magnesium implants are particularly interesting for medical orthopedic applications in children whose bones are growing rapidly. The biodegradable screws do not impair the child’s bone growth and save the small patients a second surgery. In addition, the risks of infection can be minimized and costs can be cut. “Magnesium is more commonly regarded as a white powder that is often taken as a dietary supplement,” says Arie Bruinink from Empa’s Laboratory for “Joining Technologies and Corrosion.” Implants made of magnesium alloys are not only biocompatible, however; they also have mechanical properties during the first delicate healing phase that are bonelike and, therefore, even more suitable than those of titanium.

The blessing of a resorbable screw can also be its curse. After all, the dissolution is associated with complex corrosion processes that alter the surface structure and yield a number of products—that might or might not be hazardous. Depending on the type of magnesium alloy, hydrogen gas can develop during degradation due to insufficient corrosion resistance—to an extent that even a gas cushion is being formed under the patient’s skin. Although it is in the surgeon’s intention that magnesium screws are degraded by corrosion, during which magnesium oxidizes and hydrogen is produced, the formation of gas cushions should be avoided. If all of a sudden more hydrogen gas is formed than the body can remove, the healing process of the fragile bone can be disturbed.

However, it is precisely this bio-corrosion, to which a magnesium screw is exposed, that has so far been poorly understood. This is where Empa’s corrosion researchers come in, using specially developed analytical methods to depict bio- corrosion in the body under conditions that are as realistic as possible. The goal: optimal alloys of magnesium and other biocompatible elements as well as new surface properties for resorbable magnesium screws. Ultimately, the researchers aim for a slow, well-controlled degradation of the implants that does not lead to gas pocket formation within the tissue.

“So far, it is already clear that the reaction is different depending on the level of acidity in the tissue,” explains Bruin- ink. In a slightly acidic environment, large amounts of hydrogen gas are formed during magnesium corrosion; at a pH value in the alkaline range, carbonate-containing products are produced, among other things, which can even inhibit the desired magnesium degradation. In a neutral environment with a pH value of 7.4, such as in blood, magnesium hydroxides and phosphate products are formed, which at least slow down further corrosion. Blood—as a potent buffer—is able to keep its pH value within a constant range. According to Bruinink, magnesium implants have hitherto been analyzed in comparably potent but rather non-physiological buffer systems. He does not consider this procedure to be realistic.

“Blood is a juice of very special kind”—this is how Goethe’s restless scholar Faust put it. Whether Doctor Faust knew anything about the so-called interstitial fluid, is not known. The saline fluid with its approximately ten liters far exceeds the volume of blood in the human body. This underestimated “juice” moves slowly between tissues and cells at a speed a hundredfold slower than a snail. And it is precisely this interstitial fluid that is of crucial importance if new implants are to be developed. The healing process of a bone fracture, which is controlled by immune cells and is intended to produce a well-balanced structure of bone resorption and remodeling, is primarily embedded in interstitial fluid.

The acidity of the tissue fluid, however, is subject to much greater variability than that of blood. Depending on the body part and tissue condition, a variety of parameters can affect the inserted screw. In order to provide a realistic prognosis of the course of biocorrosion in the body, Bruinink has developed experimental analysis techniques and flow cells, in which the pH regulation is modeled on the body. In a battery of ten flow cells, for instance, the researcher inserts samples of magnesium alloys that are washed by artificial interstitial fluid—with the same slowness as in the human body.