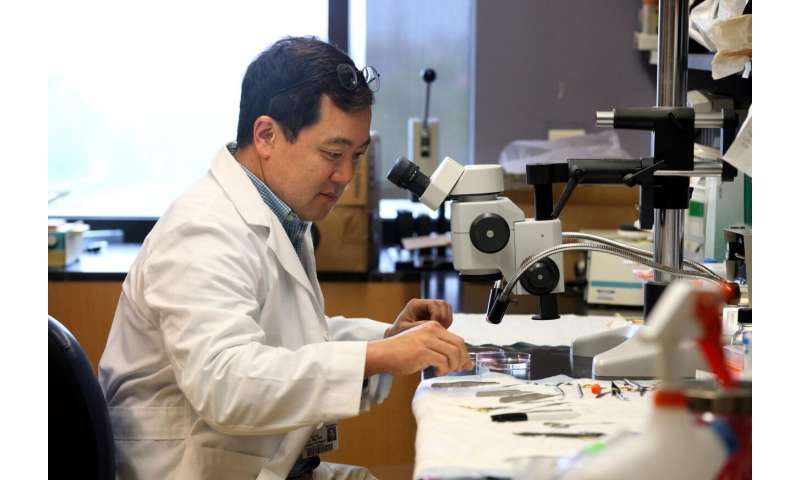 Almost one percent of all American babies are born with malformed hearts. Heart abnormalities are at once the most common and most deadly type of birth defect in the U.S.

Malformations in the structures of the right side of the heart have been linked to mutations in the master regulator gene Nkx2-5.

Researchers at the Medical University of South Carolina (MUSC) report in Scientific Reports that Ccdc117, a target gene of Nkx2-5 that is expressed in heart precursor cells, produces a protein that promotes rapid cell growth. That protein assists in the transfer of iron-sulfur compounds, created in the mitochondria, to the enzymes responsible for DNA replication and repair. When that protein is absent, the enzymes cannot synthesize DNA or unwind it to make repairs.

“When we removed this protein, there was a substantial decrease in the rate of DNA synthesis and a very big increase in the amount of DNA damage,” explains Kyu-Ho Lee, M.D., Ph.D., assistant professor of pediatrics at MUSC and senior author on the article. “The net result is that, without Ccdc117, cells stall in the early phases of division.”

Nkx2-5 has long been thought to promote the growth and division of precursor heart cells, but, before Lee’s finding, researchers did not know how it did so.

“We proved that there’s a linkage between Nkx2-5, a gene that’s very well known to be a frequent cause of congenital heart disease, and this iron metabolism pathway, which is also well known to control cell division,” explains Lee. “Cell division is an important issue in the developing heart.”

Mitochondria, which assemble iron-sulfur compounds, were once thought of simply as the powerhouse of the cell. They are now known to play important roles in many biological functions, including DNA repair and replication.

This linkage between Nkx2-5 and the iron metabolism pathway leads Lee to wonder whether lifestyle modifications by the pregnant mother, such as increased exercise and improved nutrition, could lessen the likelihood of heart malformations in the fetus.

Exercise can increase the number of mitochondria, thereby increasing the assembly of iron-sulfur compounds needed for improved DNA repair and replication.

“This is an unexpected finding that opens a new avenue for how we think about the genetic causes of congenital heart disease,” says Lee. “For the first time, it implicates a pathway involving iron metabolism. It provides a link between programs that control heart development that we know go wrong in congenital heart disease and everyday cell function that can be affected by things like nutrition and exercise and metabolism.”

For now, any connection between the general health of the mother and the risk of heart malformation in the fetus remains speculative. A definitive answer will require further study.

In future studies, Lee plans to examine the biochemistry underlying this pathway and to identify the types of congenital heart disease to which it is relevant.

“Our findings offer a new way of thinking about cell mechanisms that relate to congenital heart disease,” says Lee. “Iron-sulfur clusters have been in the background for decades in research into mitochondria. We are now beginning to understand their broader implications for general cell function. Our work once again underlines the significance of this pathway.”

Lee is also currently studying whether the expression of Ccdc117 in placental tissue plays a role in the growth of cells that knit together the maternal and fetal circulation.