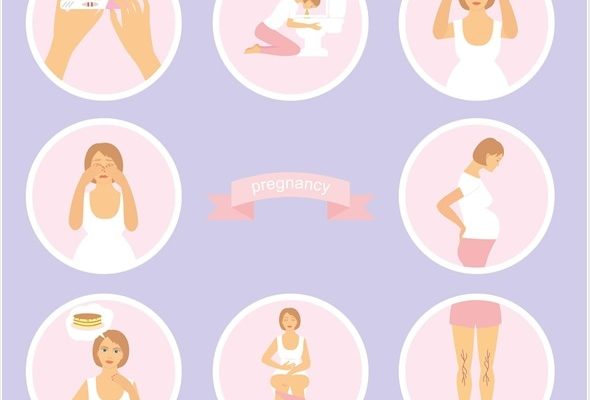 Pregnancy is a life event (divided into three trimesters of 13 weeks each) that entails substantial physiological and psychological adjustments for the mother. Within each trimester, numerous adaptations occur with the end-goal of facilitating the growth of the fetus.

The most apparent are physical and physiological changes to accommodate the growing fetus and prepare for parenthood. Traditionally, signs and symptoms of pregnancy are grouped into three categories: presumptive, probable, and positive. The only signs with 100% accuracy are positive signs, while most of the early signs of pregnancy belong to the presumptive category.

The most obvious early sign of pregnancy is a missed period or loss of menstruation. Although skipping a period is not a reliable sign of pregnancy (especially if a woman has an irregular menstrual cycle), pregnancy should be taken into account if it is accompanied by nausea and vomiting (morning sickness), breast tenderness, fatigue, and urinary frequency.

Nevertheless, the aforementioned early signs represent presumptive changes that are not considered reliable indicators of pregnancy since any one of them can be a sign of conditions other than pregnancy. For example, loss of menstruation can be caused by endocrine dysfunction, early menopause, malnutrition, diabetes mellitus, anemia, long-distance running, or stress.

Furthermore, nausea and vomiting can be caused by food poisoning, gastrointestinal disorders, eating disorders, or acute infection. Breast tenderness may stem from premenstrual changes, chronic cystic mastitis, or the use of oral contraceptives, while fatigue could be a result of stress, anemia, or viral infections.

Finally, urinary frequency can have a plethora of different causes other than pregnancy, most notably infection, cystocele, structural disorders, pelvic tumors, or even emotional tension. Thus, although a combination of early signs can suggest pregnancy, they are not reliable in confirming this condition.

This is why the use of home pregnancy tests (based on the detection of urinary human chorionic gonadotropin) is recommended as an initial step when suspicions exist. With modern, clinically sensitive urinary pregnancy tests, pregnancy may be detected up to four days before the expected period. 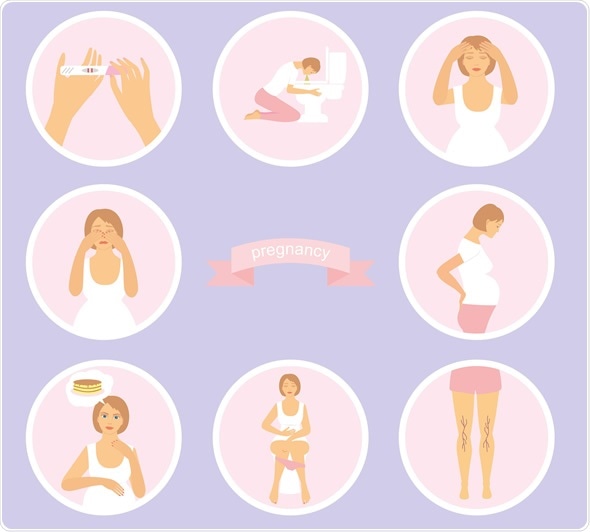 Some signs of early pregnancy can also be observed with diagnostic ultrasound or sonography. The early stage of an embryo, also known as the blastocyst, is implanted approximately one week following fertilization and is fully implanted within the uterine lining at about 9.5 days. The subsequent enlargement of the early gestational sac is visible on ultrasound imaging.

The uterine cavity stays relatively straight (undistorted), which can be shown by ultrasonography. This results in the observation of the gestational sac adjacent to such a straight uterine cavity in a thick uterine lining – a sonographic sign also known as the intradecidual sign.

The earliest evidence of intrauterine gestation is an echogenic region inside the thick uterine lining, which is seen around 25 days of the menstrual cycle. Two weeks later, the first evidence of an embryo's presence can be observed, following the attachment of the two tiny bubbles – the amniotic sac and the yolk sac – to the gestational sac’s wall.

Dr. Tomislav Meštrović is a medical doctor (MD) with a Ph.D. in biomedical and health sciences, specialist in the field of clinical microbiology, and an Assistant Professor at Croatia's youngest university – University North. In addition to his interest in clinical, research and lecturing activities, his immense passion for medical writing and scientific communication goes back to his student days. He enjoys contributing back to the community. In his spare time, Tomislav is a movie buff and an avid traveler.