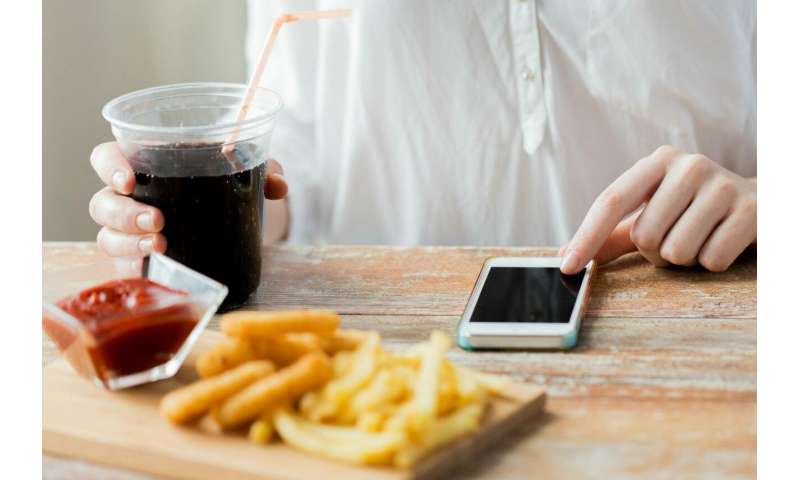 If your attention gets diverted in different directions by smartphones and other digital devices, take note: Media multitasking has now been linked to obesity.

New research from Rice University indicates that mindless switching between digital devices is associated with increased susceptibility to food temptations and lack of self-control, which may result in weight gain.

“Increased exposure to phones, tablets and other portable devices has been one of the most significant changes to our environments in the past few decades, and this occurred during a period in which obesity rates also climbed in many places,” said Richard Lopez, a postdoctoral research fellow at Rice and the study’s lead author. “So, we wanted to conduct this research to determine whether links exists between obesity and abuse of digital devices—as captured by people’s tendency to engage in media multitasking.”

An upcoming print edition of Brain Imaging and Behavior will report on the study, entitled “Media multitasking is associated with higher risk for obesity and increased responsiveness to rewarding food stimuli.”

The research was conducted in two parts. In the first study, 132 participants between the ages of 18 and 23 completed a questionnaire assessing their levels of media multitasking and distractibility. This was done using a newly developed, 18-item Media Multitasking-Revised (MMT-R) scale. The MMT-R scale measures proactive behaviors of compulsive or inappropriate phone use (like feeling the urge to check your phone for messages while you’re talking to someone else) as well as more passive behaviors (like media-related distractions that interfere with your work).

In follow-up research, 72 participants from the prior study underwent an fMRI scan, during which the researchers measured brain activity while people were shown a series of images. Mixed in with a variety of unrelated photos were pictures of appetizing but fattening foods.

When media multitaskers saw pictures of food, researchers observed increased activity in the part of the brain dealing with food temptation. These same study participants, who also had higher BMIs and more body fat, were also more likely to spend time around campus cafeterias.

Overall, Lopez said these findings, although preliminary, suggest there are indeed links between media multitasking, risk for obesity, brain-based measures for self-control and exposure to real-world food cues.

“Such links are important to establish, given rising obesity rates and the prevalence of multimedia use in much of the modern world,” he said of the findings.