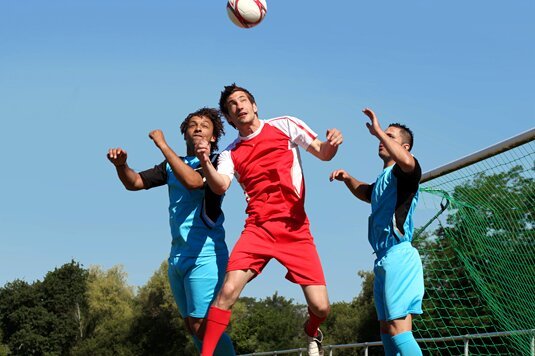 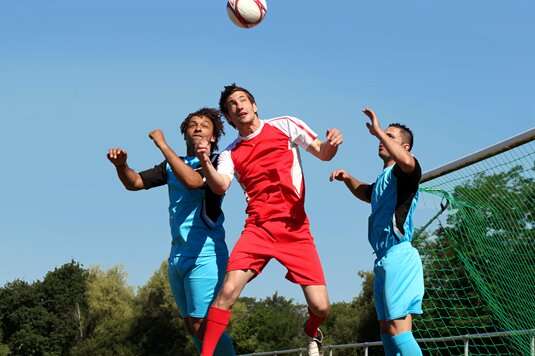 Professor Inga Koerte uses advanced medical imaging to study the immediate and long-term effects of repetitive head trauma on the brains of football players. In the following interview, she discusses her findings and their implications.

Koerte: One speaks of concussion if a physical impact on the skull causes any oscillatory motion of the brain within the intracranial liquid medium that surrounds it. This kind of movement alternately stretches and compresses the organ. This can result in microinjury to the tissues, because the brain itself is far less rigid than one might think. It has a consistency comparable to that of jelly. Concussion is a clinical diagnosis, which is based on the symptoms reported by the patient, such as vomiting, headache, dizziness. As a rule, these symptoms soon pass and the brain recovers completely. However, in up to 30% of patients this does not happen, and these unfortunates – sometimes referred to as ‘the miserable minority’ – may continue to suffer symptoms such as headaches, inability to concentrate or sleep properly, and bouts of depression.

What is the mildest form of injury that can be caused by physical trauma to the skull?

Following a concussive impact, the connections between nerve cells may be stretched so much that they no longer function correctly. Perturbation of their activity may even lead to the loss of damaged neurons. In addition, localized bleeding may occur. The sudden extension and compression can lead to fine tears in the smallest blood vessels with associated bleeding; red corpuscles can escape from the circulation and are trapped in the tissues. In a study based on Magnetic Resonance Tomography (MRT), which appeared in 2015, we demonstrated that the incidence of local microbleeding increases over the first 72 hours following concussions, and then falls off again during the next 2 months. So the brain is capable of disposing of these displaced red blood cells.

Is it possible to ascertain how the brains of the ‘miserable minority’ differ from those of the more fortunate majority?

We don’t really know what distinguishes patients who develop longer-lasting symptoms from those who recover completely. For decades now, cases of head trauma have been classified as light, moderate and severe, based on the patient’s state directly following the incident. This division is clinically significant, because it determines whether or not one needs to call in a neurosurgeon, for example. However, on the basis of the acute symptoms it is not possible to reliably predict whether an individual patient will go on to develop chronic symptoms. Our goal is to get away from this rigid categorization and focus attention on the individual patient. The brain is the seat of the individual personality – why therefore should we pretend that all cases of head trauma can be viewed through the same lens? We analyze whether and by how much levels of neurosteroids rise following an episode of concussion, for instance. Neurosteroids are hormones that are active specifically in the brain and, among other effects, they have a neuroprotective function. We also monitor how brain metabolism and brain microstructure change over time following trauma. Our goal is to formulate criteria that enable us to predict which patients will recover completely without further interventions and which cases would benefit from a specific therapy.

How does the brain react to head trauma in children? Do their brains recover more rapidly?

The child’s brain is astonishingly pliable and resilient, it is in a phase of constant growth and development. However, we now believe that it may be more vulnerable to long-term repercussions of head trauma. This is particularly true for developmental stages during which the hormonal status of the brain is undergoing rapid change – in boys during the prepubertal phase between the ages of 10 and 13. A good model for tracing the effects of repeated episodes of mild head trauma is football. I am currently coordinating a European study of head injury in young footballers. They have not suffered a clinical concussion, but they are exposed to some degree of risk because they repeatedly head the ball. Early results of our analyses reveal a link between changes in the brain and the duration and intensity of exposure to repeated impacts to the head. Our studies of players of American football in the US suggest that the real problem arises not so much from the single hard knock, but rather from the repeated incidents of mild head trauma over a longer period.

Is it then advisable to forbid children under a certain age to participate in contact sports, or to avoid heading the ball in soccer?

In 2014, anxious parents sued the United States Soccer Federation, the governing body of the sport in the US, in an effort to force them to do just that. As a consequence, the USSF then voluntarily banned headers in matches for kids under the age of 10. However, there is no scientific basis for selecting this particular age limit. It’s a completely arbitrary choice. And its most problematic aspect is the implication that heading the ball is harmless for everyone over the age of 11. On the contrary, everything we have learned from studies with young people between the ages of 10 and 18 confirms that they are particularly vulnerable to head injury during puberty, because widespread metabolic and anatomical changes occur in the brain during this developmental phase.

So what can or should parents do in such a situation?

Sport is a healthy pastime and it promotes brain development. Playing in a team also teaches social skills. But the studies carried out in recent years lead us to suspect that headers may not be healthy. We published a study in 2017 in which we compared a group of young footballers with table-tennis players and swimmers – all of our subjects were in good physical health and none of them had ever suffered a concussion. They were asked to take two tests, which were carried out before and after their training sessions. One of these was a simple test of reaction speed, while the other was more complicated and required the use of higher cognitive skills. After their workouts, all of them did better on these tests than before the training session. – Endurance sports are good for the brain. In the longer term, the performance of the table-tennis players and the swimmers in our tests steadily improved – which is what one would expect of a 15-year-old who is still developing and is eager to learn. But the footballers showed no significant improvement in their test results over time. That might possibly indicate that they are unable to call upon their full cognitive potential.

Do male and female brains react differently to physical trauma?

Women are more likely to feel out of sorts and to take longer to recover from an episode of head trauma, particularly if the injury occurs in the latter half of the menstrual cycle. The pace of hormonal change is higher during this phase than in the first half of the cycle. In a recent study, we have shown that among patients who have repeatedly suffered head trauma also tend to display a wider range of alterations in the brain than men. In addition to the hormonal differences, many other factors are likely to play a role here, such as genetic differences and differences in the pattern of the injuries.

Are there sports other than football in which concussion frequently occurs?