Woman, 32, who saw flashing white lights and thought a neighbour was shining a laser pen through her window is diagnosed with eye cancer

When Kerry Williams noticed white dots flashing around her bedroom while packing for a holiday, she thought someone was shining a laser pen at her.

But the bizarre sensation actually turned out to be a sign of a rare cancer growing behind her eye.

Mrs Williams was told she had ocular melanoma and was in danger of losing her eye, after a visit to an optician led to hospital tests.

The 32-year-old was given radiotherapy in the form of a small, radioactive disc being placed behind her eyeball for four days.

Thee procedure shrunk the 2.3mm tumour and stopped her symptoms. However, it was unable to destroy the cancer.

Now Mrs Williams is starting to lose some of her peripheral vision, and her doctors have to closely monitor the cancer to make sure it doesn’t spread. 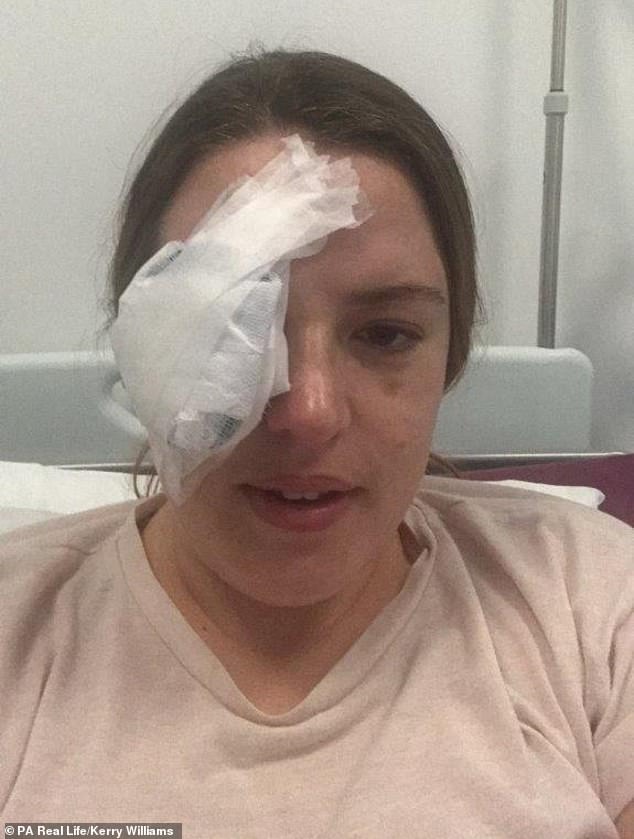 Mrs Williams, a pensions regulator, was packing to go to Kefalonia in Greece when she first noticed the ‘white flashing light’ darting around the bedroom.

She called her husband, Ben, a 36-year-old engineer, to work out what it was.

‘I asked him to look through the window and see if anyone out there was playing with one of those laser pens, but he looked at me like I was mad,’ Mrs Williams said.

But the flashes of white became more regular and she noticed a white film appear across her eye, clouding her vision every time she blinked.

So Mrs Williams booked an appointment at a Vision Express opticians, in the hope of finding some answers.

Flashing lights can be caused by changes to the physical shape of the eye which pull on the light-sensing retina and distort how light enters the eye.

‘The opticians didn’t say much, but they did spend a good 20 minutes looking at the back of my eye,’ she said.

Arriving at Eastbourne District General Hospital, Mrs Williams saw a number of ‘baffled’ doctors and had an ultrasound scan of her eye and was sent home.

It wasn’t until she had follow-up tests at Moorfields Eye Hospital in London in November that medics noticed something was seriously wrong.

Mrs Williams said: ‘For two months there had been no sense of alarm – then suddenly the medics were telling me they’d found a mole on the back of my eye and that it was malignant. I just didn’t expect it.

‘They said a lot of people have the cancer left undiagnosed for years and it can lead to losing the eye, so I should count myself lucky.’ 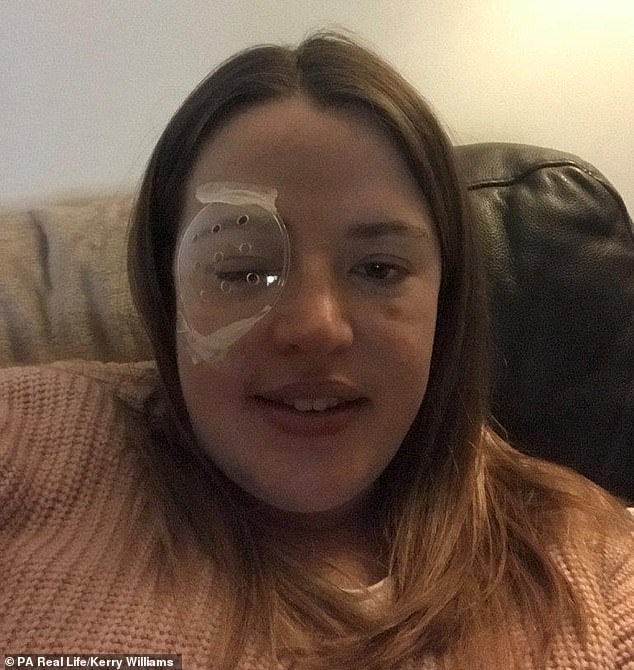 Mrs Williams, pictured wearing an eye protector while she was recovering from radiotherapy, had to have radioactive material lodged behind her eye to try and destroy the tumour 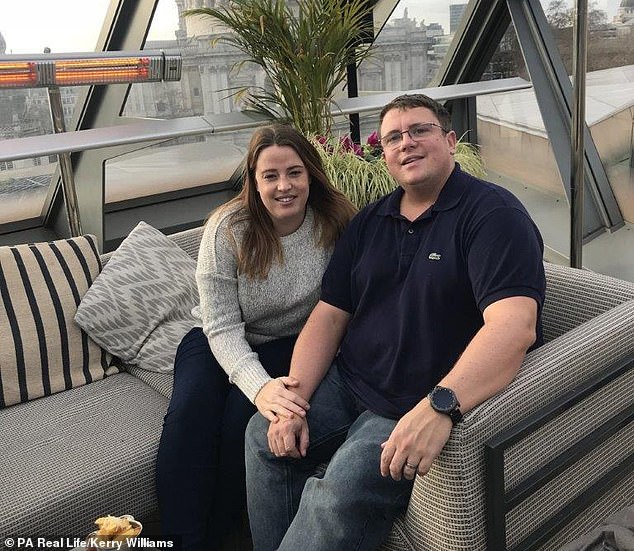 Mrs Williams, pictured with her husband, Ben, still has the tumour in the back of her eye but has shrunk and is being closely monitored by doctors to make sure it doesn’t spread 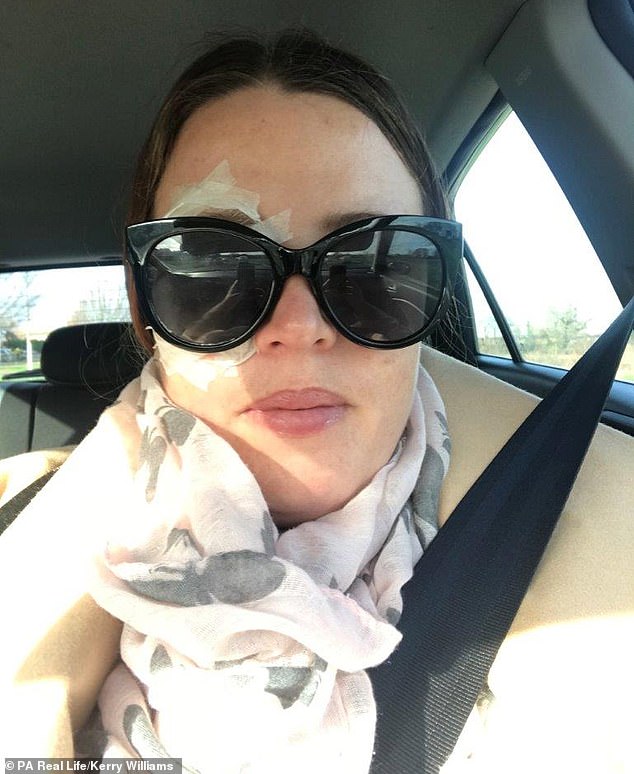 ‘Ultimately the tumour could grow and my eye could still be removed,’ said Mrs Williams, but I like to think I’ve caught it early enough that that won’t happen’

WHAT IS OCULAR MELANOMA?

Ocular melanoma (OM) is a cancer of the eye that approximately 750 Britons and 2,500 Americans are diagnosed with annually.

Although it can occur in people of all races, it is most common in those with light-pigmented skin and blue eyes. The median age of diagnosis is 55.

It develops slowly from pigmented cells of the choroid, in the iris or ciliary body and is often referred to as a ‘silent killer’. These areas make up the uveal and the disease is sometime referred to as uveal melanoma.

Usually 10-15 years after diagnosis, in half the cases, the malignant tumor can spread through the body via metastasis resulting in the death of the diagnosed person.

It is especially when it reaches the liver but in some patients the process can be delayed by 20-25 years.

Unlike cutaneous melanoma of the skin, OM is not believed to be related to sun exposure.

In January this year, Mrs Williams had surgery to fit a radioactive plaque at the back of her eye – a disc which applies high levels of radiation to a small area.

‘It was my first ever operation, so I was quite panicked,’ Mrs Williams said.

‘The whole thing was very sci-fi. I could feel this piece of metal scraping against my eye.

‘I wasn’t allowed to see visitors for more than two hours at a time because I was radioactive.

‘If I went to the toilet, I’d have to get the Geiger meter, a device used to measure radioactive waves, to make sure the plaque hadn’t fallen out before I flushed.

‘It makes a very distinct sound, an unpleasant sort of crackling, and once I was going to the toilet in the dark and scared the hell out of another patient – it was like something out of a horror movie.’

With the plaque removed after four days, Mrs Williams then faced a six month wait before finding out if the treatment had worked.

Scans showed it had succeeded in shrinking the tumour but it was unable to get rid of it.

‘It’s shown no sign of growing either, which is a good thing,’ she explained. ‘Now I’m being monitored every six months to see what happens. 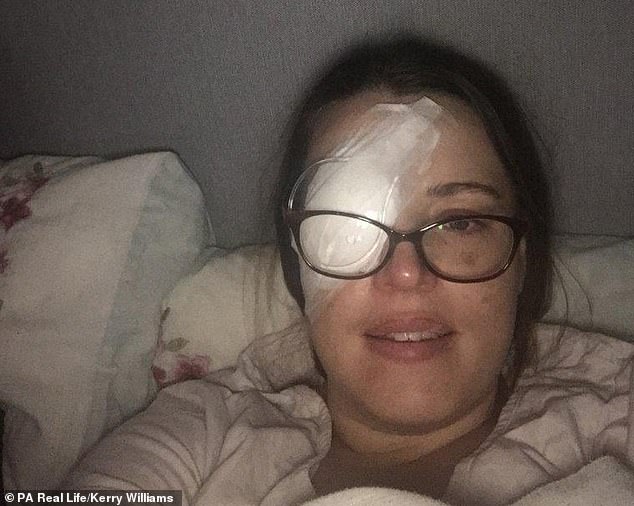 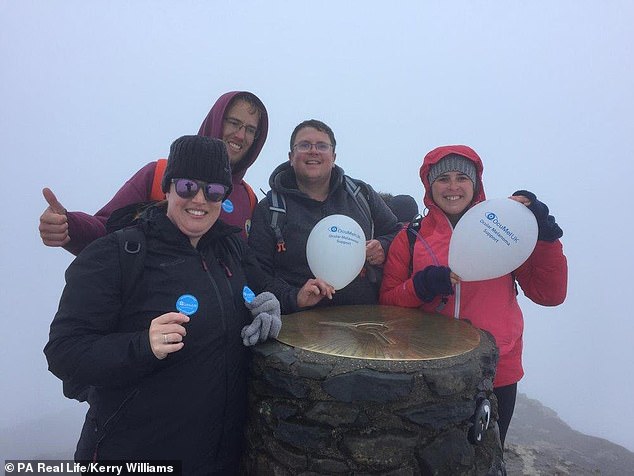 Mrs Williams is pictured with her husband and friends at the top of Mount Snowdon, which they climbed to raise money for the ocular melanoma charity OcuMel UK

‘What scares me is how aggressive this form of cancer can be. I’ve done research and in a lot of cases it spreads.

‘Ultimately the tumour could grow, and my eye could still be removed, but I like to think I’ve caught it early enough that that won’t happen.

‘The point of the treatment hasn’t been to remove the tumour but to stop it growing and shrink it, so in some ways there’ll always be a fear that the cancer might spread down the line.

‘I’ve been told I’ll need regular scans for the rest of my life but there’s some debate in the medical community whether it’s really necessary after 15 years.’

Mrs Williams credits her optician for spotting the growth and is now working to raise awareness of this form of cancer.

She said: ‘It really highlights the importance of going for regular eye tests and more needs to be done to make people aware that an eye test can detect life-threatening conditions.

‘I’m raising funds for OcuMel UK, a charity that specifically focuses on research for this kind of cancer and have raised over £1,000 so far after climbing Snowdon, Wales’s highest mountain, and I’m hoping to raise more and more.

‘People think eye tests are time consuming but, in reality, it’s essential we all go for them.

‘I might not be in the all clear yet but I’m so grateful I went to Vision Express and we caught my cancer when we did.’